PlusCoin Team, Crypto Leaders: Cryptocurrency is the Monetary Unit of the Future 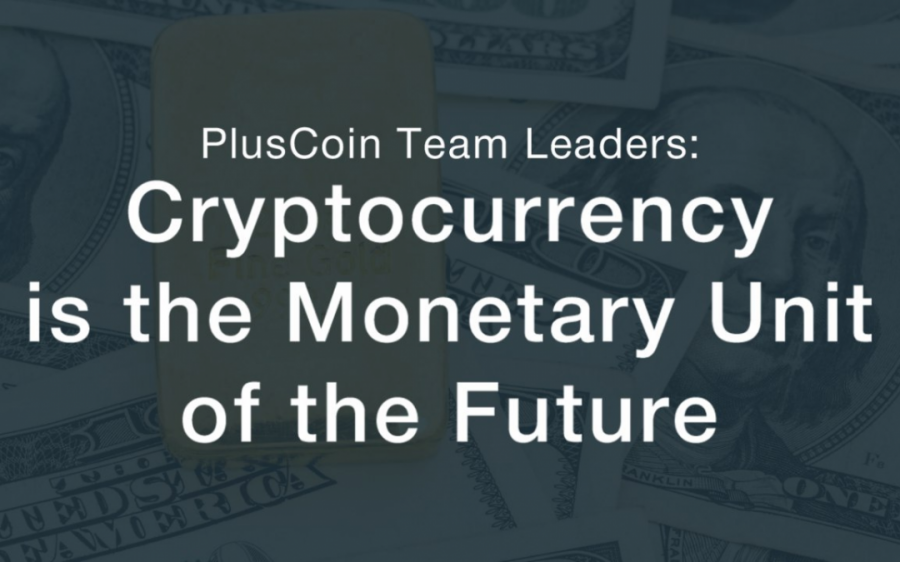 As cryptocurrencies continue to gain attention of the world of business and politics alike, the experts behind PlusCoin maintain their stance in talks relevant to the revolution brought about by the widespread use of virtual monetary units. Although PlusCoin is known to operate only on the Ethereum blockchain, it is one with the global crypto leaders in the move to popularize the distributed-ledger tech and incorporate digital assets into the daily lives of people.

Cryptocurrency to Take Over the World

The DS Plus platform developers, in consonance with the views of Roger Ver who is one of the pioneer investors in Bitcoin startups, have always been in favor of economic freedom. They believe that the world needs to realize the vital role played by cryptocurrencies in creating a society whose members can easily and freely participate in building the economy. Following this, PlusCoin continues to innovate to bring the benefits of using virtual money closer to the world.

In fact, the company’s CEO, Mikhail Mikhailov, now leads his team with greater enthusiasm to develop better ways of making people see cryptocurrency in a different light. He hopes that in five years, the company’s DS Plus mobile app will have already racked up more users who prefer the convenience of using virtual money when purchasing goods and services or when implementing state programs aimed at improving the way of life of the citizens. But, of course, this all starts with bettering the know-how of people on cryptocurrency and the technologies associated with it.

Knowing that educating the people on digital asset management is underway, DS Plus team sees that cryptocurrencies will soon take over the world. And this must not be viewed as a detriment but rather as a favorable juncture that is very much in keeping with what Satoshi Nakamoto, the pseudonymous founder of Bitcoin, has always envisioned – that is, a world that fully embraces the use of decentralized digital assets.

Vitalik Buterin, one of the founders of the second-biggest cryptocurrency which is Etheruem, affirms the surfacing of a lot more units of cryptocurrency. This might spell challenge on the part of digital asset developers including PlusCoin, but this is seen by experts as an occurrence material to the fundamental shift in which the business world works. However, people should expect that sooner or later, the list of the many digital monetary units that exist shall narrow down to leave the strongest currencies as the only choices users can have.

But while the competition among those units goes on, all cryptocurrencies fight for their wide acceptance across the globe. As stressed out by Brian Armstrong, the CEO of one of the earliest Bitcoin startups known as Coinbase, virtual currencies are all together in a battle not technically against fiat currencies, but rather against governments that look at blockchain and cryptocurrency as threats to the “normal” ways monetary transactions should go.

To that, Kristina Galkina, CMO of PlusCoin, adds that there are indeed still a lot of countries unwilling “to accept cryptocurrency as a separate economic model which can be used by citizens to make various transactions.” But in response to this issue and more, cryptocurrency advocates including PlusCoin carry on as they gear toward developing measures to ensure that the revolution started by digital assets endures adversities and rolls over to the future.

About DS Plus and PlusCoin

DS Plus is a platform that provides users with a crypto-cashback service. It comes in the form of a mobile application into which the PlusCoin cryptocurrency is integrated. PlusCoin, on the other hand, is the name not only of the cryptocurrency but also of the company that operates the said decentralized DS Plus running on the Ethereum blockchain. For more information, visit  https://pluscoin.io/.

Pluscoin is the source of this content. This press release is for informational purposes only and should not be viewed as an endorsement by CoinIdol. We take no responsibility and give no guarantees, warranties or representations, implied or otherwise, for the content or accuracy. Readers should do their own research before investing funds in any company.