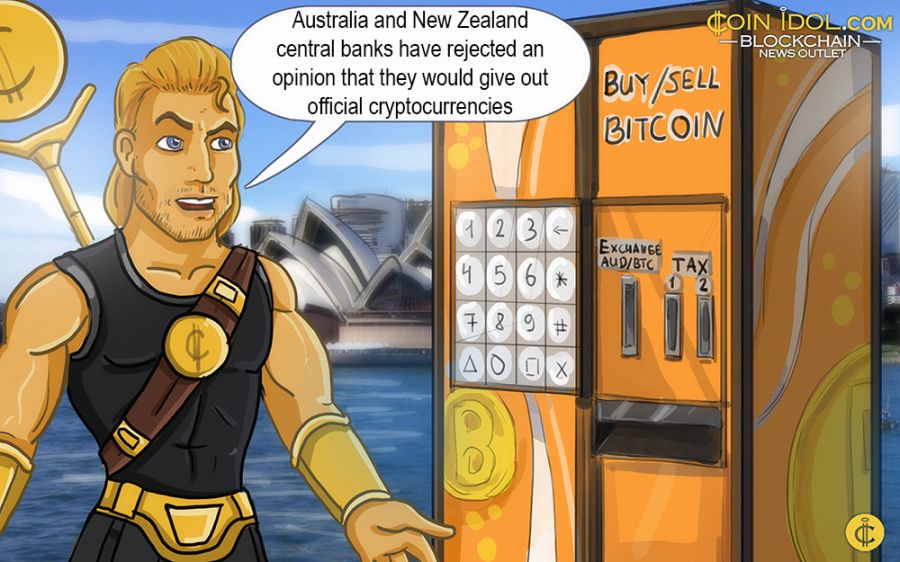 Australia and New Zealand central banks have rejected an opinion that they would give out official cryptocurrencies at any moment from now, according to RTE news outlet.

These two central banks cautioned that the big damage to their banking systems could exceed the advantages of cryptocurrencies.

Have these Cryptocurrencies Proven Competent and Dependable

One of the officials identified as Tony Richards, who leads the Reserve Bank of Australia's payment policy, revealed that most cryptocurrencies such as bitcoin, ethereum had not demonstrated their capability as secure stores of value or means of payment since they are more vulnerable and volatile to hacking.

"Nine years after its launch and about five years since it entered the public consciousness, bitcoin continues to have structural flaws that make it unsuitable for many uses, many of which stem from its inefficient verification process, " Richards said in his speech in Sydney.

Cryptocurrencies were not highly used in Australia and they were unlikely to cause any big effect on the RBA's management of fiscal policy and the banking system.

The RBA had no plan B at that moment to adopt any new type of electronic money for the users.

Richards also noted that based on the interactions they carried out with counterparts in various nations, it is also not clear for many bullish economy central banks.

The Reserve Bank of New Zealand (RBNZ) also indicated that it was not clear if a central bank digital currency will generate conclusive advantages even though the space is open to discover new and better technologies.

Geoff Bascand, the deputy governor of RBNZ said that while cryptocurrencies could cause the circulation of money more safer and cheaper, they could accelerate the odds of bank runs during the tough times of financial instability such as inflation and deflation. Depositors smoothly and remotely deposit money tona central bank crypto especially during the periods of financial stress.

"A breakdown in the financial system can cause enormous economic and social harm. We could not issue a digital currency if it might undermine financial stability,  the deputy governor said at his speech at Auckland conference. "The payments industry is dynamic, which is good. But the Reserve Bank must be a considered prospector in the exploration for digital currency benefits - we have New Zealand's currency and financial system at stake."

All the negative side in the price of digital currencies and the emerging fears that they may be used for illegal activities like supporting terrorism,  tax evasion, money laundering, have brought a lot of attention of world policymakers.

A group of 20 giant economies, who are finance leaders reached consensus in March this year to make the door wide open and start regulating the lucrative cryptocurrency industry, but the group has just begun to adopt individual rules since its hard to agree on a multilateral method to use.

Very many central banks are cautious of welcoming cryptocurrencies and will not issue their own digital money except Sweden,  where the move away from the usual use of hard cash is greatly more advanced and common than in many other countries.