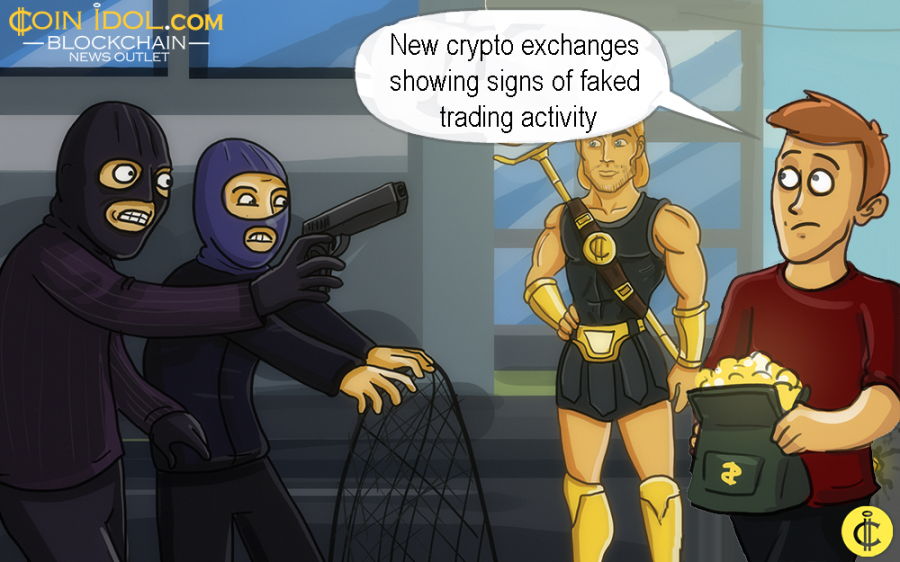 Utterly new exchanges are exhibiting drastic robust trading volumes, covering up among high marketplaces and far away above older established platforms, which has resulted to more assertions of attempts to increase visibility in CoinMarketCap's exchange platform rankings, particularly through fake and fraudulent volumes.

A back-of-the-envelope calculation for tiny exchange IDEX shows that day to day volumes are in the vicinity of $2.9 million. According to available data from Dapp Radar, IDEX has between 2000 - 3000 users daily, which amounts to an average trading of nearly $1,000 per head, and this isn't a far-fetched amount.

Expert researchers from CryptoExchangeRank blog carried out a similar calculation using the method of matching visiting statistics with the several volumes of new crypto exchanges that were presented on the CoinMarketCap. In the previous weeks, exchange platforms such as BCEX, BitForex and BigOne have increased in the ranks, activating much suspicion.

A properly done analysis by BitForex, that went above Kraken and KuCoin, indicated that a number of customers on a somewhat anonymous exchange are excessively active traders, obtaining volumes ranging from 2 to 3 times higher.

Furthermore,  BitForex still has almost 2,000 Twitter regular subscribers, while other older exchanges have just hundreds of thousands, which shows that the BitForex's organic spread is much insignificant.

Faking To Stay On Top

The new group of exchanges is predominantly used for up-and-coming tokens and Initial Coin Offerings, and listings are declared with huge fanfare in a trial to imitate a Huobi listing, KuCoin, or Binance, that are major factors in guaranteeing trading activity.

The high rankings of these major exchange send a lot of traffic to BitForex, and researchers have finalised that the trading is therefore not organic:

"BitForex forges trading volumes to stay on the very top of the rating and draw the attention of crypto investors and new users. However, they have certain issues with processing and converting traffic into users as there is no clear policy regarding interaction with the audience. As a result, the exchange doesn't have a large number of real supporters and loyal community on social media,  Telegram, or email."

Crypto asset trading has continued to allure new users, and faked volumes ignite to create a large skewed picture of how much real liquidity is there on the crypto markets.

The total average monthly volumes per customer also indicate that while someone on Binance can trade not more than $1,000 monthly, the total average for BitForex is over $12,000. The analysis indicates that forged trading volumes are perhaps a marketing strategy aimed at alluring real and potential buyers.