Eye on the Prize - Nagezeni Lambo Giveaway will Entice You 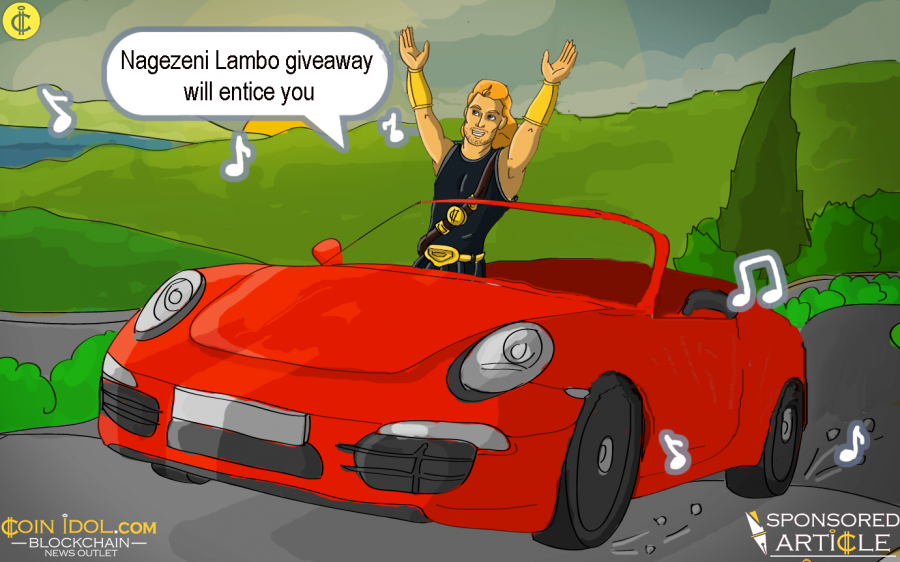 Ending months of relative stability, crypto markets have rarely been as turbulent as they are now. Traders who are usually cool will now be panicking as the price of their investments fall. Bitcoin below US$4,000 is a scary proposition for those who’ve been in the market for a year or more. Altcoins, which were supposed to be less risky for traders, are also following a downward spiral. In the present scenario, having a prize to focus on is important for those who wish to continue trading against the odds.

Recent news has emerged out of the crypto media regarding a crazy offer from a Japanese company which is promoting a contest to trade their altcoin, NZE, with a chance to win a Lamborghini and 1000+ other prizes. But is this just another lure to be reckless in a downturn?

The company is Nagezeni, and their competition lasts no longer than two weeks – from the 3rd until the 17th of December. The contest is timed to the listing of Nagezeni on CoinSuper, one of the largest exchange platforms in Asia. It is dealing with 72 pairs of cryptocurrencies and included in the top 25 exchanges internationally.

One lucky champion will be rewarded with nothing less than a Lamborghini Huracan for the best trading volume, while the couples of exclusive and super expensive watches and 160.5 ETH are going to the rest of the 1000+ winners. The more NZE tokens users will trade, the better prizes they will get.

A Lamborghini super car is symbolic of both muscle and luxury. A car that will leave even the most ardent automobile lovers in awe! The ultimate, rich man's status symbol. According to the event's annual listing of best super cars in the world, the Lamborghini made the list twice over the last 5 years in the history of the event. That is more times than any other brand.

So it seems that Nagezeni chose their prize very well! Or did they?

It is true that the market is red and needs some encouragement. But is it wise to encourage recklessness with a contest that awards such highly coveted, luxury items which may do just that? Won’t the chance to win a Lambo just encourage traders to take unnecessarily high risks?

Red Cape to the Bulls

A super car like a Lambo is sure to attract traders with higher than average testosterone levels. And they say testosterone also fuels a counterproductive trader mentality.

A widely published study found that market behaviour like increased risk-taking, overconfidence and irrationally paying higher than average for assets, in the long run is bad for the market. The study concluded that such behaviour in traders increases bid prices and asset price bubbles, and slows the incorporation of fundamental value.

It makes for very intriguing reading alongside the news about the Nagezeni contest. At this turbulent moment in the crypto market, why is the project offering a prize that could easily be associated with a greed-focused, status-seeking mentality of an out of control, hot-dog trader who is amped-up on testosterone?

However, if one looks more closely, Nagezeni is actually a very worthwhile project, which is working on a blockchain-based solution that will allow various bloggers, artists, and other online content creators to receive tipping and donations from their fans in its tokens (NZE).

They will be able to spend the received digital money on advertising and promotion, as well as launch their own crowdfunding campaigns on the Nagezeni platform. Based on enhanced Bitcoin blockchain, these transactions will be quick, secure, cheap, and scalable.

So how Much is Just Hype?

But how much of what Nagezeni is doing is based on the success of their token?

Nagezeni is creating a platform, through which users will be able to reward their beloved content creators with NZE tokens. And while today everyone is delaying the announcement of investment in a project, Nagezeni is going ahead. That has to count for something.

Projects like Nagezeni are advocating for building a world where crypto is used by more people for everyday transactions. As soon as there are other successful altcoins, it will become mainstream to use them.

Is it safe to re-enter the market? It depends on your mindset. Trading in a downturn doesn’t mean one cannot make rational decisions. One should do the research on the project, and make sure that it meets one's own qualifications. Does it have an all-star team? Look at the product, and of course, the metrics.

Perhaps traders who have not shied away from the market would be interested in what Nagezeni are offering. By participating in the contest they could seize on a great opportunity to trade and build a long-term, stable and mature market for cryptocurrencies. The Lambo is actually not the focus if one chooses to take part. But it is a great bonus if one wins!

To learn more about the Nagezeni contest and how to participate, visit the official websites of Nagezeni and CoinSuper, and follow Nagezeni project on Twitter and Facebook, as well as ask any questions on Telegram.

Tags
Giveaway Trading Market Cryptocurrency Altcoin Price Bitcoin Lamborghini
Most Popular
May 12, 2021 at 15:03
News
Cardano Consolidates Below Recent High as Bulls Attempt to Breach $1.80 Resistance
May 12, 2021 at 14:03
News
Most African Countries Cannot Access Akoin. How True is the One Africa, One Koin Sentiment?
May 12, 2021 at 14:00
PR
Spring and Bondly NFT Partnership Unlocks Digital Potential for Creator Economy
May 12, 2021 at 12:59
News
Bitcoin Cash in Sideways Move, Battles Resistance at $1,600
May 12, 2021 at 11:26
PR
XRP is Back on Track on Phemex
More