Cryptocurrency Mining Shifting Away from Energy-Intensive Proof of Work, Part 1 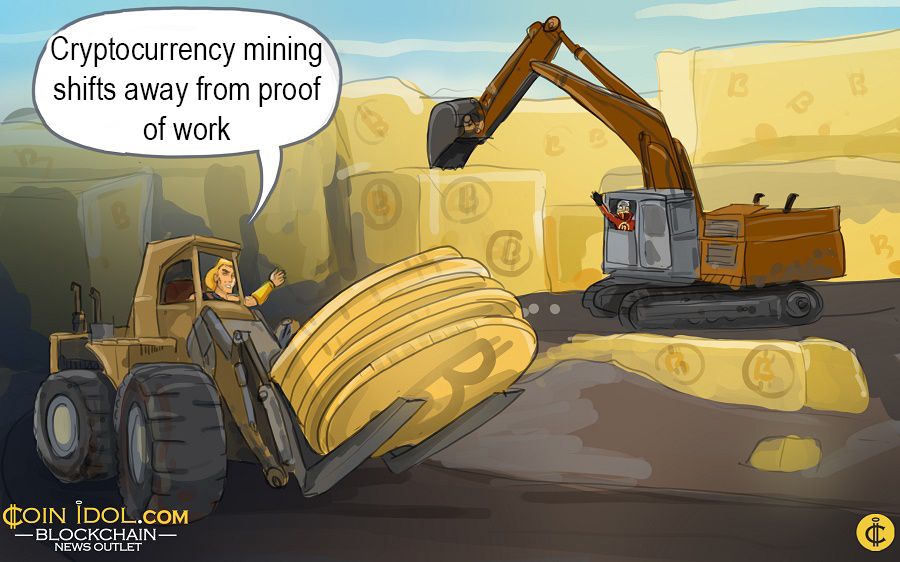 As the popularity of Bitcoin grows, the sustainability of traditional Bitcoin mining is questioned due to its exorbitant energy consumption.

Additional charts and information of how the Bitcoin Energy Consumption Index works are explained in detail at http://bitcoinenergyconsumption.com. Here is a snapshot of the steps and how much miners spend on operational costs for tasks. First, mining revenues are calculated in total USD. Secondly, the revenues spent on electricity are estimated. Thirdly, the rate for how much miners pay per kWh is obtained. Fourth, the costs are converted to consumption in order to get the full picture of the cost. Fifth, there are variables, for example, miners will spend about 60% of their revenues on operational costs and 1 kilowatt-hour (kWh) is consumed for every 5 cents spent.

Bitcoin’s Proof of Work (PoW) algorithm which is a result of machines performing the work of its “trust-minimizing consensus” every time blocks are added from transactions to Bitcoin’s blockchain, is overtaxing the energy/grid system. The issue is that many machines requiring large amounts of power have to produce many hashes per second. The alternative to the Proof of Work algorithm is the Proof of Stake (PoS) consensus algorithm but it is still unproven and there are other problems with it, therefore not making it the perfect system either.

Proof of Work is a system that is based on how much work is done by a miner to make sure that the chain is authentic. But this method requires more computing power to protect against attackers. It’s not an efficient solution especially if Bitcoin mining increases exponentially and taxes the energy grid further.

In the Proof of Stake algorithm option, in return for validating transactions, token holders get transaction fees as a reward, plus, the validations occur faster. Another advantage is that the Proof of Stake system doesn’t require an incredible amount of computer power nor does it cause users to consume huge amounts of electricity. Threshold determines the nature of mining in Proof of Work so more computing power is added causing the increase in electricity costs. One benefit of Proof of Stake is that it allows token holders to keep their tokens on a long-term basis without having to be concerned about the negatives in the Proof of Work option. As well, Proof of Stake is more cost-efficient and protects the network better.

In the Abstract Casper the Friendly Finality Gadget https://arxiv.org/pdf/1710.09437v2.pdf, written by Casper founders Vitalik Buterin and Virgil Griffith from the Ethereum Foundation, it states, “There are two major schools of thought in PoS design. The first, chain-based proof of stake [1, 2], mimics proof of work mechanics and features a chain of blocks and simulates mining by pseudorandomly assigning the right to create new blocks to stakeholders. This includes Peercoin[3], Blackcoin[4], and Iddo Bentov’s work [5].

The other school, Byzantine fault tolerant (BFT) based Proof of Stake is based on a thirty-year-old body of research into BFT consensus algorithms such as PBFT[6]. BFT algorithms typically have proven mathematical properties; for example, one can usually mathematically prove that as long as > 2/3 of protocol participants are following the protocol honestly, then, regardless of network latency, the algorithm cannot finalize conflicting blocks. Repurposing BFT algorithm for Proof of Stake was first introduced by Tendermint[7], and has modern inspirations such as [8]. Casper follows this BFT tradition, though with some modifications.”

Proof of Work vs Proof of Stake

In this very informative short video Proof of Work VS Proof of Stake – Simplified Explanation, https://www.youtube.com/watch?v=SiKnWBPkQ4I&ab_channel=Cryptonauts

“Casper is responsible for finalizing these blocks, essentially selecting a unique chain which represents the canonical transactions of the ledger. Casper provides safety, but liveness depends on the chosen proposal mechanism. That is, if attackers wholly control the proposal mechanism, Casper protects against finalizing two conflicting checkpoints, but the attackers could prevent Casper from finalizing any future checkpoints.”

Currently, there are two versions of Casper being worked on. The first Casper is the one worked on by Vitalik Buterin. The second one is correct-by-construction Casper (CBC Casper) which is explored by Vlad Zamfir:

Find out how Casper will make a difference in crypto mining in The Future of Bitcoin Mining Won’t Involve Unsustainable Energy Consumption for Casper, Part 2.