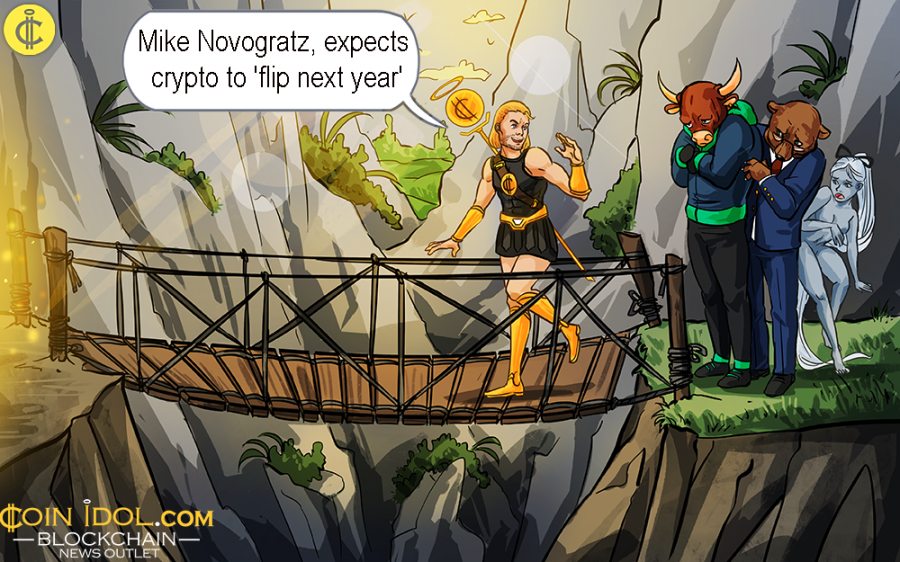 The former Goldman Sachs partner & Galaxy Digital founder, Mike Novogratz, has revealed that he expects crypto to 'flip next year' in an interview conducted by Financial Times on Friday, November 23, 2018. Currently, Bitcoin (BTC) is trading at around $4,300 after facing monthly low.

During the interview, Mike revealed that 2018 has been very challenging for Galaxy Digital. He added that its inferior to start a business during the time of a bear market. Mike believes Galaxy Digital will more probably become the Goldman Sachs of digital currency.

Prices to Start Moving Next Year

He also anticipates that cryptos will more than likely flip in 2019 since that's the time when prices will begin inclining again.

Tim Swanson, founder of Post Oak Labs, a fintech advisory company, said that Mike was "attempting to forecast something that he has no influence over" each time he comments "something will occur with price."

Tim further added that several firms had attempted to do what Galaxy Digital is doing now without much in the way of positive outcomes, closing "welcome to 4 years back!"

An unidentified founder of a Blockchain firm was quoted saying that " one of the largest hurdles in digital currency is the absence of plausible merchant banking" and added that Galaxy Digital is now in a good position to become the first firm to take advantage of 2019’s new markets.

Mike revealed that it's trivial to be skeptical but there is something occurring after uncovering crypto developments led by significant statistics in traditional finance.

Mike cited Bakkt, a crypto platform formed by the operator of NYSE and the digital assets management services - for all institutional investors previously proclaimed by Fidelity, a giant investment company.

The Chief Commercial Officer (CCO) of BitPay, a world cryptocurrency payment processor, also revealed this week that these two moves from the traditional financial sector will trigger digital currency's next big prices action. The CCO, Sonny Singh, believes that Bitcoin will strike around $15,000 to $20,000 before next year ends.

However, Mike Novogratz’s Cryptocurrency Trading Desk made a loss of $136 million in just 9 months, according to Bloomberg.

Galaxy Digital blamed its poor Q3 trading results in part on lukewarm trading volumes and a lot of competition for arbitrage opportunities.

“While we continue to improve and strengthen our trading business, lack of overall trading volume in cryptocurrencies has been a headwind,” the firm said in a filing.

It said the fair value of its digital assets, net of short positions, stood at $90.6 million at the end of September and that the assets cost $172.7 million.