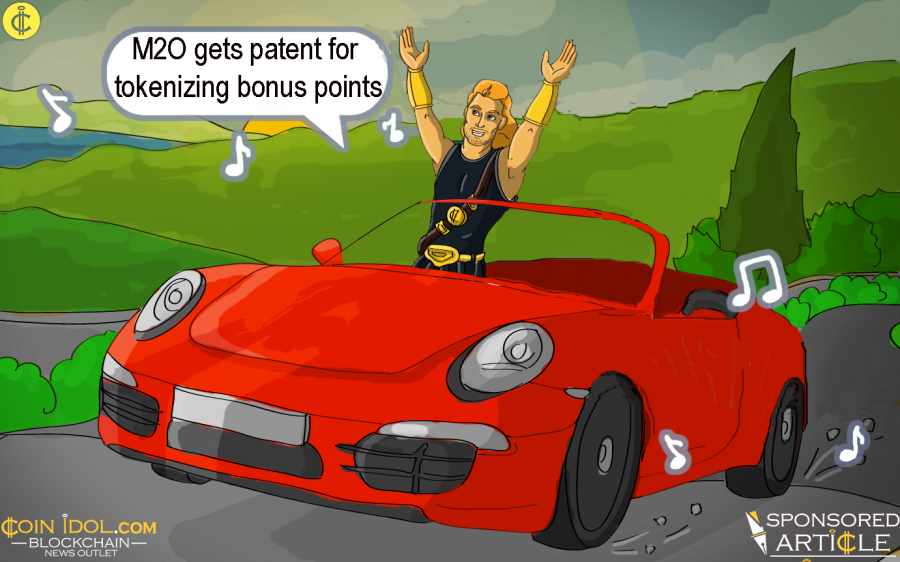 There was much said and written about blockchain and its cutting-edge features that can be applied to any industry or company. Blockchain itself is not the answer, but a fuel for future creations and innovations. And those who understood it before anybody else will receive or has already received all the credit and recognition.

As a result, some sort of blockchain patent war began. Huge multinational corporations worldwide started investing in blockchain research and its possible applications. A media outlet Alibaba tops the list with a total of 90 patents focused on decentralized technologies, followed by IBM, MasterCard and Bank of America. They are planning to utilize blockchain in various fields, ranging from data security to finance and remittance.

A Korean startup M2O developing a solution for applying the technology in loyalty systems hasn't been left unnoticed. It has been announced that it recently received the Certificate from Korean Intellectual Property Office. The certificate was granted for ‘the method for mileage integration and real asset capitalisation using integrated platform of FinTech and blockchain’. In other words, M2O now has a patent for their platform that allows customers to exchange points with cryptocurrency tokens and use them for goods and services of various merchants affiliated with the project.

The fact that M2O project was given a certificate, that is quite rare for start-ups, highly demonstrates that their invention is pioneering, non-obvious and useful. By achieving a patent, the project’s team guaranteed themselves an honest, fair and straight treatment from different companies and markets.

“We clearly see now that blockchain technology attracts not only small FinTech startups, but world corporations are also getting excited about it. The number of blockchain-related patents is increasing. It proves that this technology is not just a hype, it is a strong trend that will define our future. We are really proud to stay at a frontier of it,” M2O's CEO Henry Kim said.

There are currently about 350 blockchain-related patents worldwide, and the number of applications for more are growing steadily. The overall number of blockchain patents for 2018 is expected to be around 1,245, which is up from 313 two years ago.

What exact value the M2O certified technology can bring to customers or companies? To answer these questions, you can have look at your card case or pockets, where undoubtedly you will find bonus or discount cards that you have hardly used.

Even though you may have a large amount of reward points they can expire before you redeem them. Moreover, they are not not transferable, you just lose them.

Utilizing blockchain solutions, M2O eliminates current drawbacks and limitations of loyalty programs. Once their platform is ready, anyone will be able to exchange points, miles or any other bonuses for internal cryptocurrency and real money. For this purpose, M2O plans to establish its own Mileage Bank that will let users manage, store their points and make transactions with them. That will become possible because users will be able to manage their tokens via M2O wallet and use them as virtual currency afterwards.

Moreover, these points can be used as cash in the project’s own shopping malls and affiliated network to buy various goods and services.

The project allows to tokenize customer points through M2O Pay system into M2O coins, which can be later transferred, sold or traded on an exchange. Thus, previously “brick-and-mortar” points will become efficient and user-friendly.

Thanks to the M2O platform, loyal customers will no longer have to think about the expiration date, because their bonuses will be converted into tokens that can be used anywhere in the world.

Now that being said, with the patent M2O project proves that its idea is viable and has full potential of improving current loyalty programs and bonus points. If someone prefers to speak, M2O finds it more useful to act.

Finally yet importantly, M2O is planning to start the second fundraising stage on October 29th at, 16:00 JST time (UTC +9), that will be officially ended on November 23rd at 16:00 JST time (UTC +9). The first crowdsale stage, M2O team has managed to successfully complete in a very short period of time. Such interest in the project shows that M2O is doing a great work so far and their community is actively supporting it. They have set a hard cap of $56 million and soft cap of $5.6 million.

While participating in the second stage, remember that only Ethereum is accepted. Crowdsale token price is of 30000 M2O for 1 ETH. Minimum contribution is 1 ETH. Total Supply is 35 billion M2O; meanwhile supply for the ICO is 14 billion tokens.