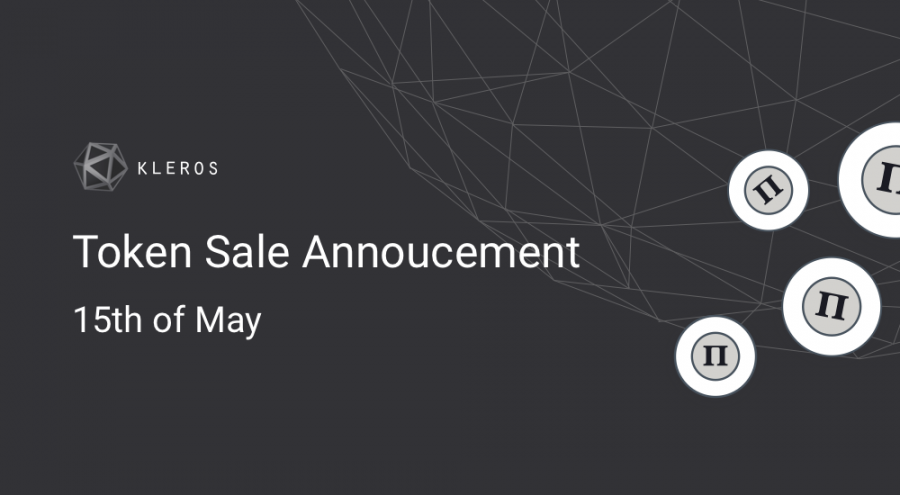 Kleros is a blockchain-based justice system within Greek democracy and is introducing a dispute resolution protocol layer for the internet.  In the initial round of their upcoming crowdsale, it will use a new structure that will allow equal participation by everyone.

Kleros, a new dispute resolution layer for virtually everything on the internet, has announced that they will be using the model of an ‘Interactive Token Sale’ for the projects crowd sale coming on May 15 2018. It will mark one of the first times any project has gone without a private funding, and exclusively used the Interactive token event model in a public crowd sale. Announcements on the next steps of the token event can be found on the  Kleros Telegram.

The word ‘kleros,’ which means ‘chance’ in Greek, is related to the kleroterion, which was a stone randomization device used in democratic processes in ancient Greece. Athenian citizens would place their personal pinakion – a small, bronze identification plaque – into the kleroterion to be randomly selected to become jurors in public legal disputes.

Kleros works by arbitrating disputes over transactions, services or basically anything on the internet, by randomly selecting jurors who are experts and also hold the projects native token, aptly named the Pinakion (PNK). Holders of PNK tokens are eligible to become jurors in disputes that have been initiated by two parties that elected to use Kleros for their dispute resolution. Based upon how jurors vote, holders of PNK can earn additional tokens if they judge the dispute correctly, according to their peers.

Kleros, which has not accepted private funding and will not perform a ‘pre-sale’ for private parties, has elected to be one of the first companies to conduct their crowd sale entirely by Interactive token sale.

Interactive token sales are designed to be more egalitarian than conventional public sales, which aligns with the principles guiding the Kleros project. Using crowdsourced jurors, Kleros will provide dispute arbitration, enabling claims to be settled clearly, fairly, and transparently. Explaining the reasoning behind an Interactive token sale.

“Initial Coin Offerings have shown the phenomenal public interest in funding blockchain projects, but participation has become a lot harder. Due to exclusive private sales and pre-sales, crowdsales have now bypassed the crowd. We want to change that, which is why we’ve gone for an interactive ICO which allows for a fairer token sale. That way, participants can set their own cap, and then a uniform token valuation is deduced, based on the total ether contributed.”

A New Model For Everyone

The model of the Interactive token sale was first proposed in a paper written by Vitalik Buterin, co-founder of Ethereum, Jason Teutsch, co-founder of Truebit, and Christopher Brown, CEO of Modular. The Truebit and Modular project, who has since built the application that will run the crowd sale. One of the guiding principles of the Interactive token model is that it eliminates favoritism and deep discounting. Kleros has declined private sale offers from major investors, electing to proceed directly to a public sale in which everyone has an equal opportunity to acquire tokens. Buyers are free to submit a bid for tokens but retain the option of voluntarily withdrawing their offer if the ‘hard cap’ of the sale become too high.

The Interactive token sale concept resolves problems associated with capped sales including oversubscription, network congestion, and, in the case of uncapped sales, misaligned incentives between contributors and developers. Kleros’ purchase protocol will allow participants to specify the amount of tokens they’d like to purchase and a personal cap in ETH. The contract will then remove contributors whose cap was exceeded, starting with the lowest bids, and these individuals will be given the option of entering a higher personal cap to ensure inclusion.

A total of 16% of all PNK tokens will be issued in the Kleros token event on 15 May 2018, with the remainder of the supply earmarked for a public sale to follow. In total, 66% of the 1 billion PNK minted will be distributed for sale. Further rounds of funding will be scheduled as we complete the milestones featured on the kleros website.

“In addition to choosing the IICO method, we have decided to do the sale in more than one round, similar to the model of a traditional startup, we are doing a smaller initial public sale followed by a sale later. We think it’s fair that people can choose to keep supporting the project as the team delivers on the product.”

Kleros also just released a working demonstration video of their product. Their protocol is scheduled to be released to the public before their token sale in May.

Incorporated as a cooperative under French jurisdiction, Kleros will launch a crowdsale on May 15, like its justice protocol, that is characterized by a spirit of égalité: fairness and equality for all.

Kleros is the source of this content. This press release is for informational purposes only and should not be viewed as an endorsement by CoinIdol. We take no responsibility and give no guarantees, warranties or representations, implied or otherwise, for the content or accuracy. Readers should do their own research before investing funds in any company.