Google's G suite Twitter account is now the victim of an ongoing Bitcoin (BTC) scam which has been afflicting the social media platform for almost a month, joining firms such as Target, who faced an identical hack early Wednesday, October 14, according to news from TheNextWeb.

"Google is giving 10,000 BTC to all community! We decided to make the biggest crypto-giveaway in the world!"

G Suite seems to be the highest-profile target of the con game yet, which saw false, elevated tweets which are said to be coming from the G Suite account pop up in the timelines of users on Wednesday afternoon, taking them to a scammy BTC giveaway address. 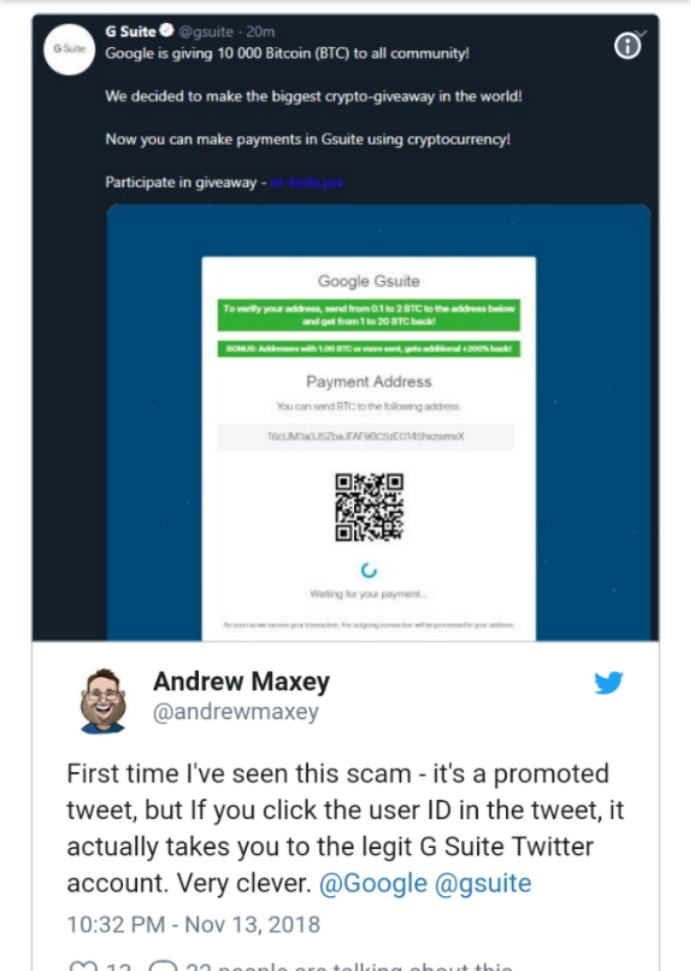 How Can Crypto Scams be Handled?

On Wednesday afternoon, Twitter issued an official statement to The Verge concerning the Target hack, saying that the firm has enhanced how it handles digital currency scams and that it plans to invest more in tools to manage spam effectively in future.

Furthermore, at the moment the Target hack was uncovered, Twitter discovered many other compromised accounts - of which one is the G Suite account, and Twitter was soon explicating it, as it also works hard to take significant action.

Scammers have often been masking themselves as big celebrities such as Elon Musk to scam various people into providing them free Bitcoin. Nonetheless, the G Suite hack appearing a few hours after the Target event is a signal, and there is a probability that this Bitcoin scam may become worse before getting better.