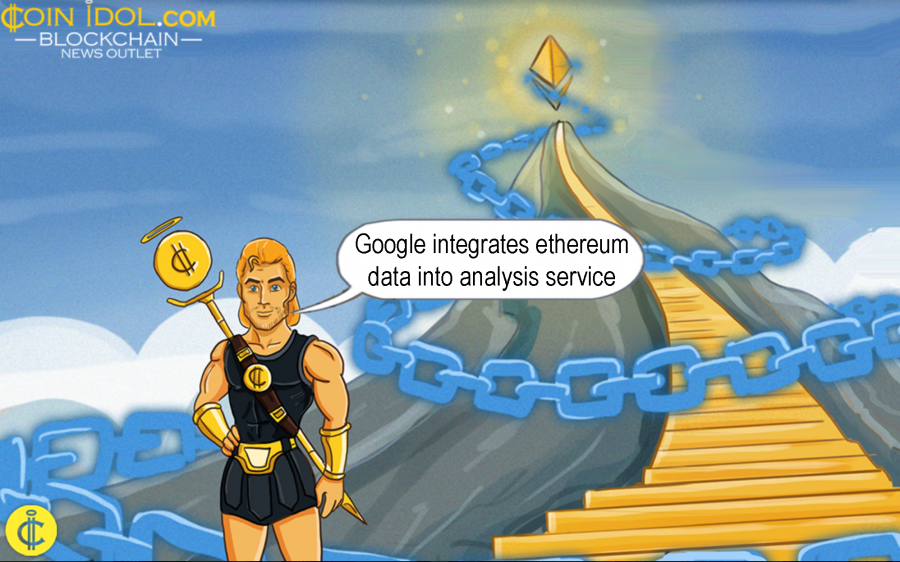 BigQuery, the Google's data analysis programme for huge amounts of information, now shows Ethereum (ETH) Blockchain data. BigQuery is linked to Google Storage and allows users view data physically. It was publicly made available in November 2011 claiming to manage up to 70 terabytes (TB) of information.

It heralded the change via a blog post that started with words "ETH and other Cryptos have captured the imagination of economists, technologists and financiers."

Blockchain at its Best Peak

Fundamentally, it is linked with Google cloud storage, and the moment data is uploaded, then the user can task the programme to show items following the certain parameters. It can manage 1,000 requests per second per project and it can give answers to a question concerning 4 TB of data just in 30 seconds.

It's completely free to use for for as big as 1 TB a month, from which it begins costing some money. BigQuery merged Bitcoin data in February this year.

As per the official explanation, Blockchain data does better at offering OLTP (transaction) data not OLAP (analytic) data.

“Inability to easily build reports from the blockchain can reduce transparency and increase the difficulty of price discovery of BTC-USD,” it explained at the time.

The service shows all Blockchain tech information and refreshes every 10 minutes. One choice is 'transaction visualisation.'

In April 2018, Uri Shaked, an Israeli software developer discovered that it was feasible to mine Bitcoin through the programme, at no cost. Shaked said:

“…this experiment gave me a whole new perspective about the enormous computing power that is being spent mining Bitcoin. We’re talking about 26 billion giga-hashes per second — that is 2.6*10¹⁹ , which is more than the number of grains of sand on earth. Every second.”

ETH data has been listed due to visual representations being helpful for forming business decisions.

Its Business as Usual

As per BigQuery, ETH data is "precise and direct" where Bitcoin's is in some cases ambiguous. It still has more data due to the fact that it keeps and run contracts plus transactions.

Therefore, Google indicates that it has kept away its banning time behind. All crypto advertising had been stopped from its platforms in March this year, which led to some terror and dismay, but the media firm soon slackened.

At the end of July, 2018, Google plucked off an App known as MetaMask from its Online Stores and the MetaMask was not notified of this decision. MetaMask is of great use to ETH world since it links normal web browsers with Blockchain network.

Adding the salt to a wound, a phony version of MetaMask replaced the genuine one and five hours later, the App was reinstated, even with no explanation given to the administration.

Tags
Data Blockchain Google Analytics Ethereum Service Information Storage Bitcoin
Most Popular
May 16, 2021 at 11:30
News
3 Reasons Why Payment Service Platforms Switch to Blockchain, Facilitating the Adoption of the Tech
May 16, 2021 at 10:35
News
Chainlink Rally Stalls at High of $52 as Altcoin Retraces for More Upside Momentum
May 16, 2021 at 09:29
News
Uniswap Range-bound Between $36 and $44, Attempts to Breach Recent High
May 15, 2021 at 12:40
News
Low Orbit Crypto Cannon LOCC Lottery Draft Occurs Every Hour | Stake Once to Enter All Upcoming Drafts
May 15, 2021 at 11:20
News
Dogecoin Resumes Fresh Uptrend as Buyers Recoup Above $0.40 Support
More