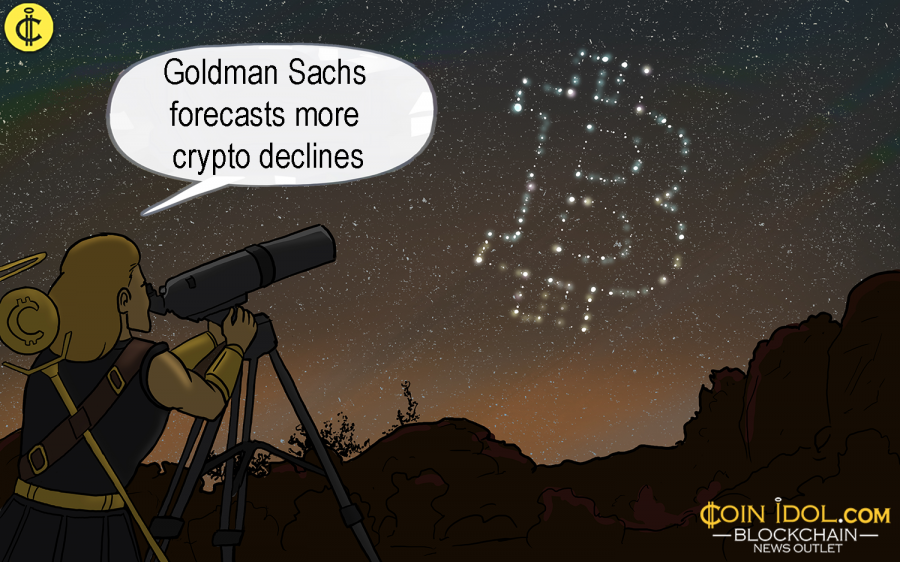 David Solomon, incoming CEO at Goldman Sachs has revealed that he intends to put more Bitcoin and crypto services in the investment company's portfolio. Still and all, the Goldman Sachs 2018 mid-year economic outlook report alludes Bitcoin will go on moving down for an anticipatable future.

“Our view that cryptocurrencies would not retain value in their current incarnation remains intact and, in fact, has been borne out much sooner than we expected,” the team lead by chief investment officer Sharmin Mossavar-Rahmani said in the report.

The outlook report indicates that the price of  Bitcoin has dropped 45 percent as per now this year.

"We expect further declines in the future given our view that these Cryptos don't fulfill any of the three traditional roles of a currency," Goldman Sachs revealed.

Furthermore, Goldman Sachs noted that they are a unit of measurement, a medium of exchange, nor a store of value. Cryptocurrencies delineate 0.3 percent of world Gross Domestic Product.

Mossavar-Rahmani and other crypto analysts had anticipated early this year in January that Cryptos wouldn't be able to keep their valuations over a long period of time.

Though pessimistic about the future of Bitcoin and its maniac adherents, the Goldman analysts de-emphasized interests that a crypto market crash would stumble into other equities markets, debating that Bitcoin and its comrades get a lot of media attention than what their valuations merit.

“Importantly, we continue to believe that such declines will not negatively impact the performance of broader financial assets because cryptocurrencies represent just 0.3% of world GDP as of mid-2018,” the analysts said. “In fact, we believe that they garner far more traditional media and social media attention than is warranted.”

Tags
Cryptocurrency Bitcoin Future Report Service Media Exchange Value
Most Popular
May 16, 2021 at 11:30
News
3 Reasons Why Payment Service Platforms Switch to Blockchain, Facilitating the Adoption of the Tech
May 16, 2021 at 10:35
News
Chainlink Rally Stalls at High of $52 as Altcoin Retraces for More Upside Momentum
May 16, 2021 at 09:29
News
Uniswap Range-bound Between $36 and $44, Attempts to Breach Recent High
May 15, 2021 at 12:40
News
Low Orbit Crypto Cannon LOCC Lottery Draft Occurs Every Hour | Stake Once to Enter All Upcoming Drafts
May 15, 2021 at 11:20
News
Dogecoin Resumes Fresh Uptrend as Buyers Recoup Above $0.40 Support
More