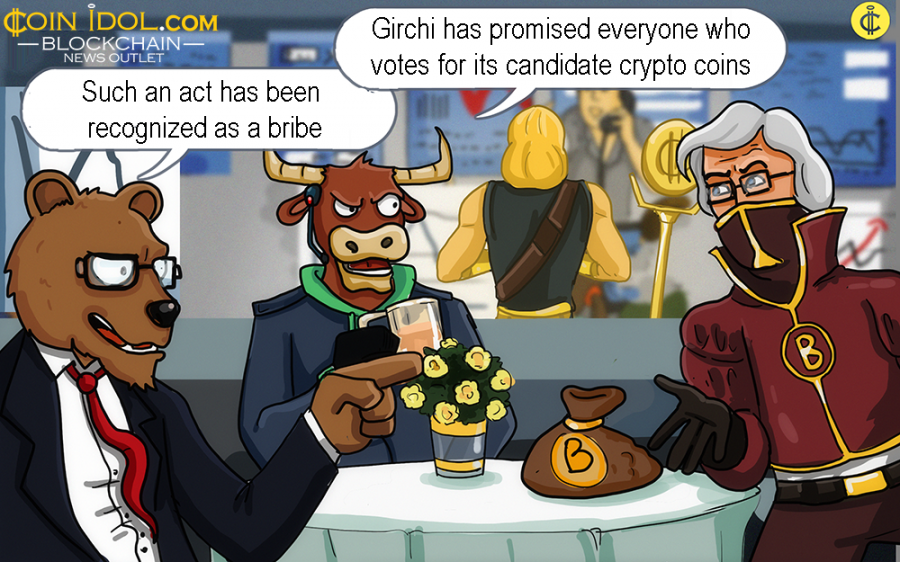 A major political scandal has taken place in Georgia. The opposition party called Girchi has promised everyone who votes for its candidate in the next elections, crypto coins worth $50. Such an act has been immediately recognized by opponents as a bribe.

The leader of Girchi, Zurab Japaridze, has made a statement saying that he wants to introduce their representative to the parliament and is willing to give cryptocurrency to those, who support his position. The party pushes its candidate for the parliamentary elections of 2020 to the Mtatsminda District electorate. Parliamentary by-elections through a majoritarian election system will be held in N1 Mtatsminda election district on May 19.

The non-governmental organization has also created a digital currency, the Georgian Dollar (GeD), to strengthen its position. These coins will be distributed to each citizen, who will give his vote to Girchi’s candidate, in the amount of $50. Mr Japaridze notes that this sum in GeDs will worth a hundred times more in the future. People, who go door-to-door in order to inform citizens about Girchi’s views, will get an equivalent of $900 (90 GeD) from the party.

“We today announce our willingness to distribute 100 million GeDs, our digital currency, to people who vote or engage in this process on our behalf,” Japaridze affirmed to Georgia Today.

The leader of Girchi doesn’t consider such innovation as a bribe and says that it only extends the capabilities of the party and its potential access for ordinary citizens. Currently, law enforcement agencies are investigating the matter and have given no official answer.

What is the Point of Designing a New Cryptocurrency?

As per Zurab Japaridze, the innovation will help citizens in two ways. First of all, the fintech solution will give an opportunity to any citizen with an accumulated store of GeDs to take part in making significant political decisions, including the formation of the 2020 Parliamentary List. In addition, it will enable people to use it for the privatization of their property.

“All kinds of state property in the country, be it fields, meadows, forests or mountains, are the property of the Georgian citizens, which we will return to them,” Japaridze added.