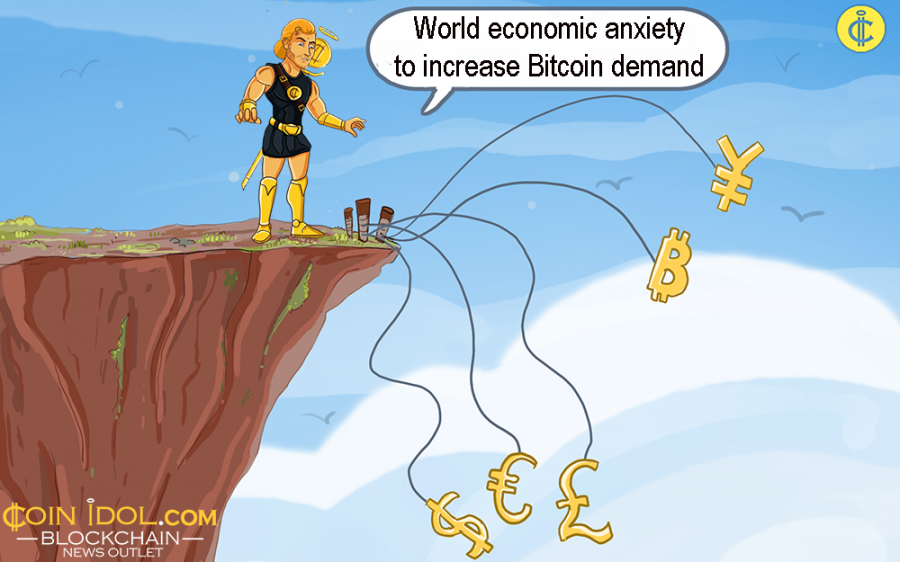 The latest reports show that the year 2019 will see major financial anxiety. For example, the U.S economy is anticipated to slow in 2019 and is likely to face a recession next year. Similarly, China appears to have also registered an economic slow-down within the past few months. We can’t also put aside the brewing trade war between China and U.S.

Britain is also not immune to this problem. It is having its upheaval in regards to Brexit. If no deal is made, Britain is more likely to snort in its economy.

Therefore, the Chinese Yuan, Sterling Pound and the U.S Dollar are all under fire, and the question in people’s mind is: Will Bitcoin (BTC) surge amidst the financial tempest?

U.S – China Economic War, who is Losing the Battle

The major recession of last year still lives on in the minds of many American citizens. According to a recent report by Bloomberg, data from JPMorgan shows that there was around a 60 percent possibility that the U.S would go into a recession in 2020.

In case the USD was to consume a big hit, then BTC could be the only rescuer in place. Any niche or economic slowdown in the U.S, doesn’t just bleed the country but also the globe at large since U.S is the largest economy on planet earth.

The China-China trade conflict kindled in 2018 and isn’t helping the matter. Now, it appears that there is a cease-fire with multiple talks underway but they are a defect. And it this matter is not dealt with asap, it will trigger both economies to hit a snag.

BTC doesn’t provide financial invisibility, but in this case, it seems to be the most perfect method to effectively safeguard the accumulated funds which could soon lose a lofty side of its value.

A recent 2018 report by the Guardian shows that China registered the slowest economic progress since 1990. This was as a result of the economic conflict with the U.S. The economic dwarf could even stretch into this year, observing the Chinese Yuan start collapsing in value.

Despite BTC not being an immediate possible solution for Chinese citizens, considering the rough relationship between the cryptoasset and the Chinese government, with demand & adoption for the crypto increasing in the nation and the traditional fiat currency – Yuan losing, then BTC could more probably be an asset of choice for a large number of Chinese citizens.

What Does Brexit Mean to Brits & BTC

Britain is ready to exit the E.U.  it was believed that this process would run smoothly, but the absence of a deal between Britain and E.U has stimulated financial anxiety among the U.K people.

According to Forbes, disregarding Max Keiser noting that the claim that British people are massively dumping the Sterling Pound for BTC, the action appears to be far-flung. BTC could act as a safe haven in case things intensify in the U.K and the economy is hit gravely.

With giant economies passing through financial hullabaloos, this appears the time to seek refuge. BTC was developed in such a way to offer this type of soft landing and as majority people discover & learn this and buy-in, then demand and prices will have to rapidly increase. Bitcoin is currently trading at $3,566 and the market cap is at $119 billion, according to coinmarketcap data.

Tags
Demand Bitcoin Adoption Price China Finance Economy War Trading
Most Popular
May 30, 2021 at 11:01
News
Chainlink Faces Rejection at $35 as the Altcoin Resumes Selling Pressure
May 30, 2021 at 10:01
News
China is Planning to Issue a Central Bank Digital Currency to Strengthen Surveillance Over its Citizens
May 30, 2021 at 08:23
News
Dogecoin Is in a Fresh Downtrend, Poises to Revisit the $0.21 Low
May 29, 2021 at 12:09
News
Polkadot Price Reaches the Oversold Region, Downward Move Is Doubtful In the Interim
May 29, 2021 at 11:01
News
Uniswap Price Recovers Above Support Level as Buyers Push on the Uptrend
More