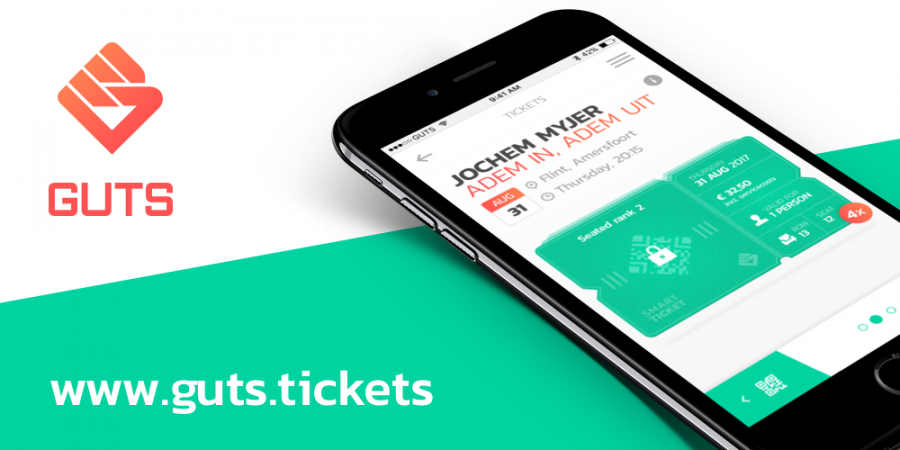 Amsterdam-based GUTS look set to strike back at ticket gougers with their revolutionary Blockchain-based ecosystem, which has seen immediate support with over $2.5 Million raised within the first few hours of their ongoing ICO.

A staggering display of political inability to solve the problems with secondary ticketing is helping Amsterdam-based blockchain ticketing company  GUTS in their mission to create a worldwide honest ticketing market. At the moment a law 6 years in the making was diluted by lobbyists ensuring the protection of reseller profits,  GUTS launched their ICO, raising over $2.5m in the first few hours.  GUTS plan to raise almost 17.5 million dollars with their ICO which will commence on 15th of November.

Award winning  GUTS have been selling tickets via the blockchain since 2016, and have an impressive track record. They struck a deal with theatre powerhouse  Hekwerk in Holland and they enlisted the manager of the  no. 1 DJ in the world Martin Garrix and Chris Payne from the world-renowned Adèle and Maroon 5 booking agency  ITB in London to assist them in getting their product adapted internationally. With the current deals in place  GUTS are projected to sell over a million tickets in 2019.

It was only after  GUTS launched its’ application that they considered doing an Initial Coin Offering:

“We were looking for ways to extend the impact of the product and came to the conclusion that building a protocol that is fuelled by our very own token and opening it up for all ticketing companies to use, was the way to go” states the CEO of GUTS, Maarten Bloemers.

Another big advantage is the capital that is being raised within the project:

“There are a lot of forces that are trying to keep the status quo on secondary ticketing. There is a lot of money being made by people who will go to great lengths to protect their interests. The raised capital of the ICO ensures our independence while accomplishing our mission for a worldwide honest ticketing market.”

The GET-protocol, upon which the  GUTS ecosystem is built on, is fueled by the GET-token. The protocol uses the token to process event ticketing. Every time an event is created, the protocol buys GET from token holders to process the event through a stability fund. As long as events are being created within the protocol, token holders can sell their tokens to the protocol at a guaranteed exchange rate of 0.58 dollars.

“We think the guaranteed exchange rate of the tokens mitigates risks for early contributors. As long as they are confident GUTS or other ticketing companies are creating events within the GET-protocol, there is very little risk of losing their money.”

GUTS has already completed the initial round of fundraising for their ecosystem, having raised $2.5m. In total,  GUTS seek to raise roughly $17.5m from their ICO, which is now approaching tier 1 of the main ICO, which will open on the 15th November, at 13:00 CET. Early backers will be able to pick up GET at a discounted rate, depending on how early backers contribute. There are a total of 28,348,649 GET remaining from a total pool of 36,900,000 GET. To find out more, visit  https://ico.guts.tickets/

Read all about GUTS on:  www.guts.tickets
Read the Whitepaper:  https://guts.tickets/files/GET-Whitepaper-GUTS-Tickets-latest.pdf

GUTS is the source of this content. This press release is for informational purposes only and should not be viewed as an endorsement by CoinIdol. We take no responsibility and give no guarantees, warranties or representations, implied or otherwise, for the content or accuracy. Readers should do their own research before investing funds in any company.

Tags
Million Blockchain ICO Support Token Event Rating
Most Popular
May 04, 2021 at 14:19
News
22% of Vietnamese Citizens Use Cryptocurrency Amidst Regulatory Pressure
May 04, 2021 at 12:31
News
African Migrants Turn to Cryptocurrency for Low Fee Remittance
May 04, 2021 at 11:26
News
Cryptocurrency Market Analysis: 5 Biggest Gainers of April 2021
May 04, 2021 at 09:24
PR
Peer-to-Peer Internet ThreeFold Goes Multichain to Accelerate Token Accessibility
May 03, 2021 at 15:03
News
China Eyes February 2022 Beijing Olympics for Digital Yuan Launch but Is It Still Viable Amidst COVD-19 and Rising anti-China Movements?
More