Dinosaur Skeleton Set to be Auctioned for Bitcoin in France 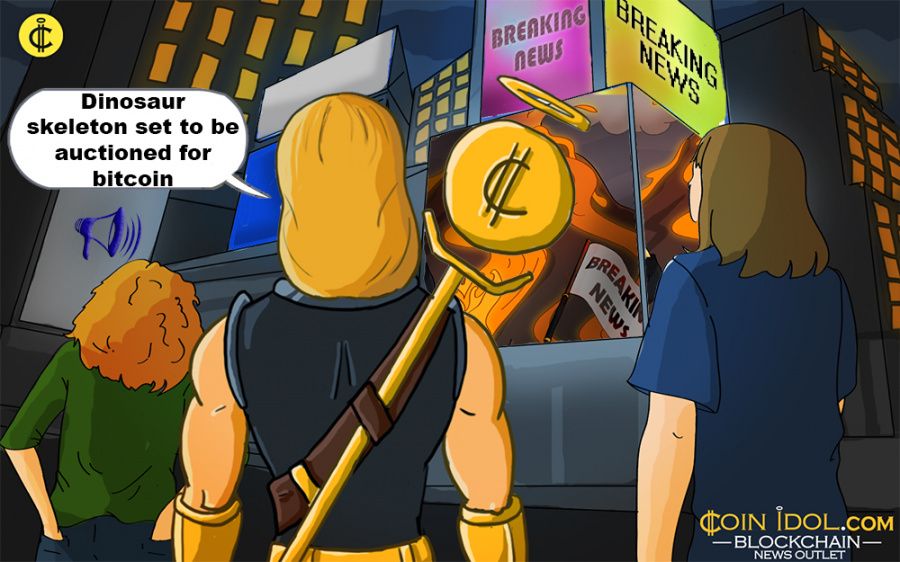 The mysterious skeleton of an unknown kind of dinosaur is alleged to be up for auction in Paris this June. Auctioneers have an opportunity to bid in both euros and bitcoins. The financial market experts say the fossil seems to gain a large amount of money.

The nine meter long skeleton has lost almost no structural elements. Around 70% of the figure is complete, making it more valuable. The fossil is estimated to be worth 1.8 million euros ($2.22 million), according to the experts’ predictions.

The finding is considered to be from the carnivorous, theropod group of dinosaurs, which had hollow bones and three-toed feet, reported Eric Mickeler, a paleontological expert working with auction house Aguttes. However, he pointed out that some differences between the traditional species and this recently-found dinosaur are still visible.

The researchers discovered the skeleton in Wyoming, USA five years ago. Currently, it is the property of a British businessman, whose identity is not revealed.

At the moment the unique archeological piece is being presented to possible buyers at an exhibition in Lyon, France until the June 4 auction. The first floor of the Eiffel Tower will be the exposition spot for the sale. Bids will be allowed in euros as well as in cryptocurrency.

Tags
France Bitcoin Auction Euro June Paris Market Money Finance
Most Popular
Sep 22, 2021 at 12:12
News
Banks in EMEA Miss Out the Potential of Blockchain, with Only 19% Benefiting from the Technology
Sep 22, 2021 at 11:11
News
Bitcoin Cash Drops Sharply to the Oversold Region, Poises for a Fresh Uptrend
Sep 22, 2021 at 10:15
News
Learn Professional Trading From The Best. DIFX Academy Is The Place To Be
Sep 22, 2021 at 09:17
News
Cardano Declines to the Previous Low at $1.91 as Bears Resume Selling Pressure
Sep 21, 2021 at 13:11
News
The Chinese Digital Yuan Shows Success, but WeChat and Alipay Pose Threats
More