DDoS is a Real Menace – but Blockchain Can Help 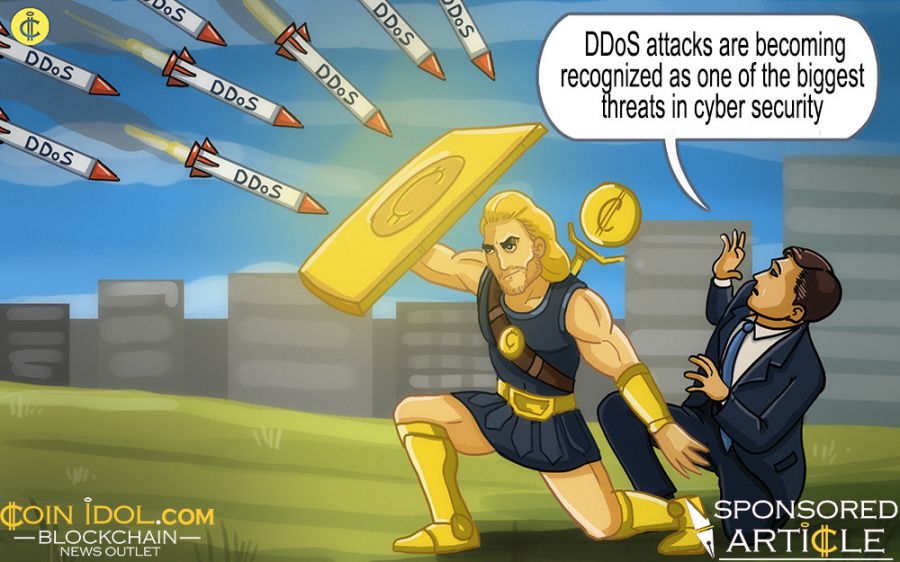 DDoS (Distributed Denial of Service) attacks are quickly becoming recognized as one of the biggest threats in cyber security right now.

FThis is largely due to their increasing prevalence – in Q2 2017 around 86 countries were affected by DDoS attacks, up 14 from the previous quarter. And a report by Cisco predicts that the annual number of DDoS attacks will rise to 17 million by 2020.

They’re also extremely costly – in 2012 each attack on the financial sector cost its victims an average of $17 million. This is a worrying statistic when attacks are on the rise so sharply.

DDoS attacks work by flooding their victims’ servers with traffic, overwhelming their bandwidth and causing them to work less efficiently or stop working altogether.

They generate this enormous flood of spam traffic by infecting devices such as mobile phones and computers, transforming them into ‘bots’ which can be directed to a particular server.

Last year, DNS company Dyn fell victim to one of the biggest DDoS attacks yet. Around 100,000 infected devices made up the botnet, including many IoT devices. This horde of zombie machines then attacked the DNS infrastructure of Dyn.

Dyn’s job, in basic terms, is to connect readable hostnames (like www.website.com) to numerical IP addresses which can be read by machines.

The result of this attack was that Dyn was unable to connect its customers’ domain names to their IP addresses, causing havoc among its users.

Huge names like Etsy, Twitter, and Spotify experienced big interruptions in service, and some even went offline for some time. This was a big deal for services whose users rely on constant, smooth access.

Another big DDoS event took place in 2017. The WireX attack began when hackers infected Android apps in the Play store. Users then unwittingly downloaded the apps, loading the bots onto their phones without any knowledge of what they were doing.

Once a sufficient number of bots were in place, the WireX attackers used them to launch a series of attacks on the hospitality industry, causing huge amounts of damage. This attack was so serious and widespread that it took the combined efforts of several high-ranking cyber security firms to restore order.

These are just a few of the more well-known attacks – there are many more, without even mentioning all the attacks that went unreported.

How can they be stopped?

In future, DDoS attacks look set to keep increasing, and will pose a big threat to companies. What makes matters worse is that current methods for defending against these attacks aren’t very effective.

One of the main approaches to tackling DDoS right now is ‘blackholing’, which just involvesi blocking all the traffic to a site until the problem is resolved. This is far from ideal, as the resulting lack of access to the site causes a huge amount of disruption in itself.

Other solutions that involve trying to separate good traffic from bad are unreliable, and often end up blocking legitimate visitors while allowing spam traffic to enter.

Blockchain to the rescue

While the cyber security industry toils to solve the mounting DDoS problem, the solution may lie in blockchain technology.

Spearheading these efforts is a startup called Gladius, who aim to defeat DDoS attacks by creating a network of bandwidth sharing.

The core of all DDoS attacks involves using up the bandwidth of their victims’ servers. Most servers are centralized, with a finite amount of bandwidth, so a sudden flood of excess traffic can fill that space up quickly and lead to disruption of service.

The answer, Gladius believe, lies in simply providing more bandwidth. This is tricky under the current centralized system, so they plan to create a decentralized network of servers that can share bandwidth with one another when the need arises.

The key to this lies in blockchain technology.

It will allow Gladius to build a network where each server represents a node. Should one node fall victim to a DDoS attack, others can temporarily contribute some of their spare bandwidth (it’s rare to have no spare bandwidth), helping the unfortunate server to better resist the attack.

What’s in it for the helpers? Well, in exchange for their bandwidth they’ll receive Gladius tokens (GLA), which are worth money. It’ll be simple to monetize your underutilized bandwidth by simply installing a desktop client and start sharing it. The end-result could make the difference between a site surviving an attack and a potentially costly disaster.

For the many companies becoming increasingly concerned about DDoS attacks and what it might mean for their business and industry, blockchain technology could have a long-awaited answer.

Gladius is launching its token sale of the 1.11, and there's a presale going on right now.

Tags
DDoS Blockchain Attack Network Industry Technology IP Service Coinidol
Most Popular
May 01, 2021 at 12:54
News
Russia is Going to Establish a Special Department for Exploring Artificial Intelligence
May 01, 2021 at 11:58
News
Dogecoin Price Pushes To The Upside; Can Bulls Breach The $0.45 Resistance Zone?
May 01, 2021 at 10:10
News
VersoView: Building Brands and Communities with Unique Blockchain Publish, Engage and Reward AI Solution
May 01, 2021 at 09:16
News
Polkadot Resumes Fresh Uptrend, Targets Resistance at $48
Apr 30, 2021 at 14:28
News
Ethereum Faces Rejection At $2,800, Consolidates Above $2,700 Support
More