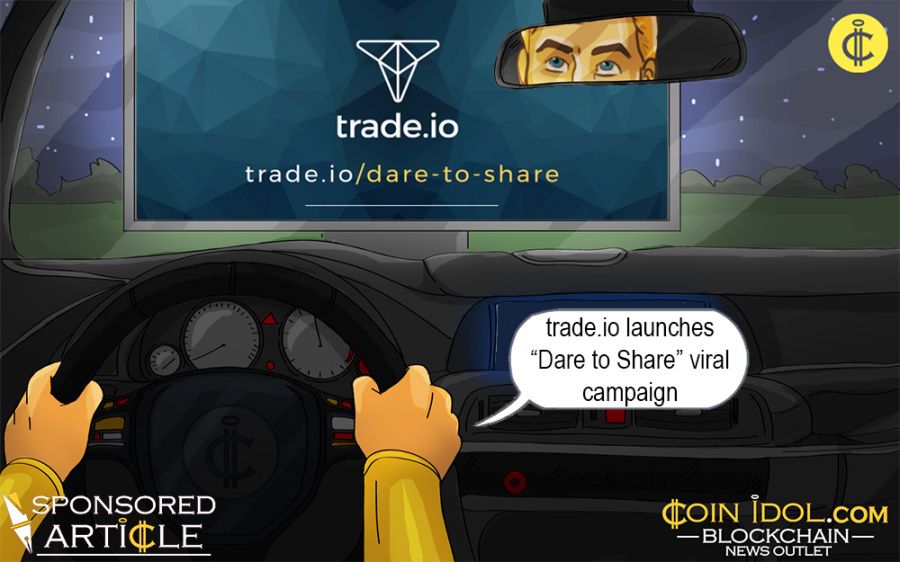 Fresh off a recent massive airdrop campaign, trade.io has now launched a viral campaign in the form of a huge competition to help spread the news about its upcoming cryptocurrency exchange.

Participants of this viral campaign all stand a chance to win incredible prizes, including an all-expense paid VIP holiday in Cyprus, and a grand prize of a $100,000 vacation to tour the world.

The trade.io “Dare to Share” competition will run for three months, starting on June 20th, 2018 and ending on September 20th, 2018. Each month will see 30 winners picked, announced on the 20th of the months of July, August, and September.

Competition Launched as Tribute to Fans

trade.io launches this competition just a week after announcing its sponsorship of Bloomberg’s first ever cryptocurrency-focused hosted event at its headquarter office in London on June 29th, 2018. At the “The Future of Cryptocurrencies” event, trade.io’s CEO, Jim Preissler will be announcing the launch date of its much-awaited crypto-to-crypto exchange.

Trade.io head of business development Terence Tan sought to credit the company’s active and supporting community for all the success achieved thus far, and said that this latest event was a sort of tribute to that recognition:

“This promotion offers another opportunity for our TIO holders, community members and others, to engage in our brand - and it rewards them for doing so!“

The trade.io Dare to Share competition is simple to enter. Anyone who Likes, Shares or Posts original content that talks about the upcoming trade.io exchange on their social media channels will stand a chance of being awarded points for participation. Points will be awarded based on levels of engagement and activity.

Extra points can also be earned by purchasing trade.io’s native cryptocurrency, Trade Token (TIO), or for introducing new friends to register at trade.io.

Once the competition concludes, the top 90 participants who have gathered the most points will win the prize of the Cyprus holiday, which will include the chance to personally meet and greet with trade.io’s senior management team, a VIP black tie gala dinner, a luxury cruise around sunny Cyprus, a tour of the old city of Limassol and much more.

Visit the competiton page to view the leaderboard and keep up with the latest updates.

Based on Blockchain, Built for the Next Generation

trade.io represents the modern, built-for-tomorrow financial institution. Built on the innovations of blockchain technology, it aims to give users the very best and latest in secure and transparent cryptocurrency exchange.

With decades of solid experience in trading, investment banking and fintech, trade.io combined this knowledge with the technological advancements of distributed ledger, creating a one-of-a-kind transparent exchange to usher in a new era for asset trading and investment banking.

To learn more, visit the website and find out more about the trade.io team. For more details of the competition, visit the Dare to Share page. Or, meet the community and chat with them on Telegram or Twitter and Facebook for the very latest on trade.io.

Tags
Trading Exchange Platform Cryptocurrency News Event Community Cyprus
Most Popular
May 08, 2021 at 11:25
News
There is Fire in the Cryptocurrency Market As Dogecoin Could Be the Next Big Thing
May 08, 2021 at 10:26
News
Polkadot Attempts to Breach $40 Resistance, Lacks Buyers at Higher Price Levels
May 08, 2021 at 09:39
News
Ethereum Continues Its Bullish Run As It Attempts to Jump Over $3,750 High
May 07, 2021 at 12:43
News
Ripple Faces Stiff Resistance at $1.70 High as Bears Attempt to Sink XRP to $1.00 Low
May 07, 2021 at 10:39
News
Revolut Users Will Gain Stronger Control of Their Bitcoins with New Withdrawal Feature
More