Cryptocurrencies Bounce at the Previous Lows. What is the Next Move? 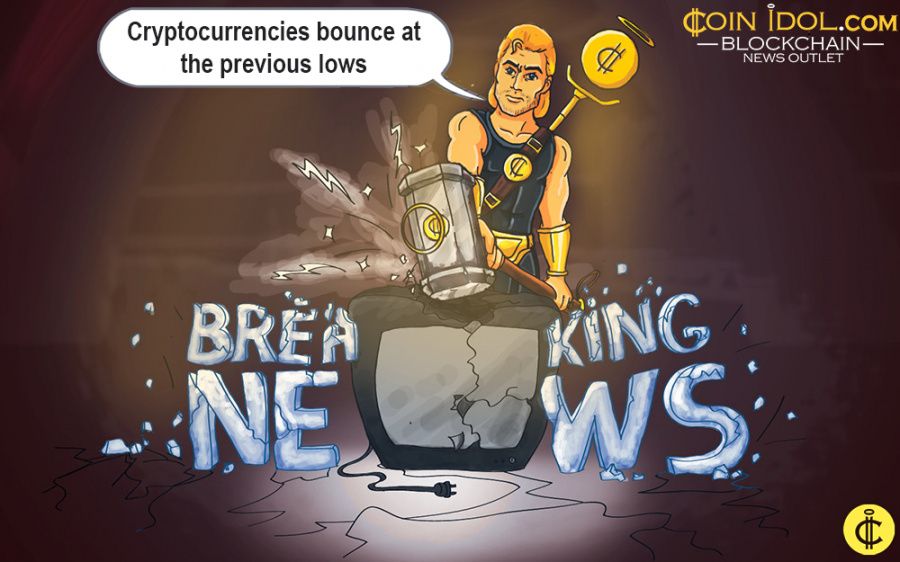 Interestingly, all the top cryptocurrencies were toeing each other as the market fell to the previous low. Coinidol.com analysing Binance coin, Bitcoin SV, Cardano, Tron and Stellar coins price.

The previous lows are the historical price levels where the market falls and bounces back. The coins listed below are likely to make positive moves this week as the market reaches previous highs.

The pair has been trading in an ascending channel in November. The support line was broken by price as the bulls fail to overcome the price at $21.50.The bears compelled BNB to fall and reach a low of $14.86. This was also the previous low in September when the market moved up. Binance Coin is in a bullish move after the bulls have defended the previous low. The next move of the coin is to revisit the high of $20. 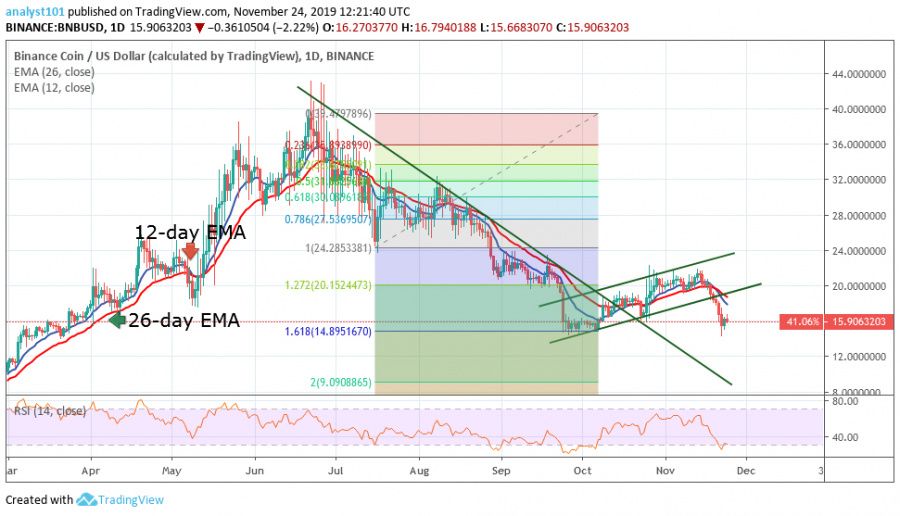 Bitcoin SV had been under bear control since October. The bulls had been struggling to penetrate the price at $150 but were repelled in October. Bitcoin SV is facing a similar situation in November, as it nosedived to the support of the trend line. 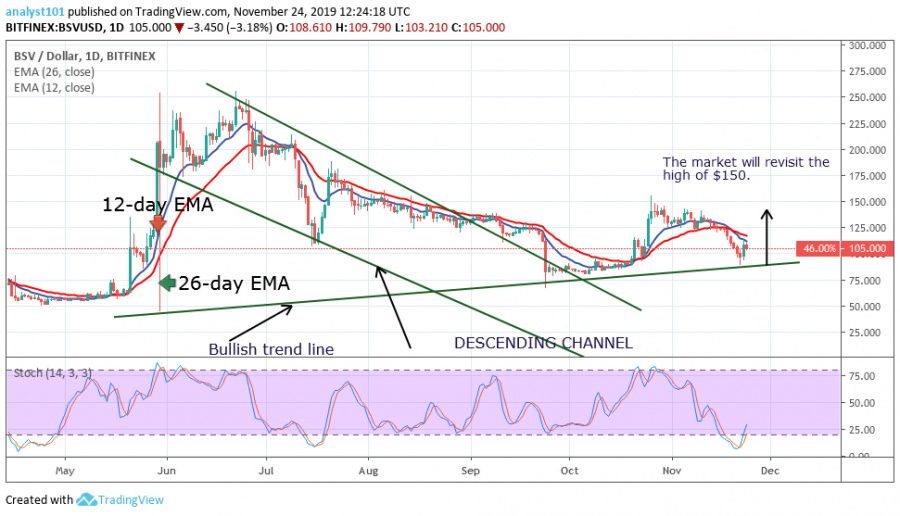 Cardano had been in a consolidation for the past two months. The market has been relatively stable for long term investors to profit but it is the exact opposite to short term traders. The price movement has been insignificant for short term trades to profit. Nevertheless, the coin fell to the support and pulled back. As Cardano pulls back there is the tendency for it to revisit the previous highs. ADA is currently trading within the price range of $0.045 and $0.035. 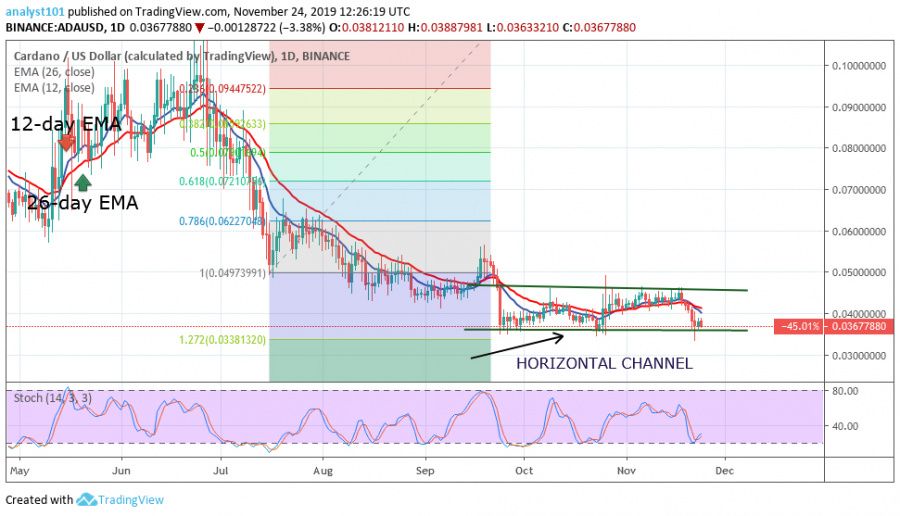 TRON is also trading in a bear market as the price fell after being resisted at $0.020. The price fell into the descending channel. This implies that the price fall may continue. However, if the bulls fail to break the resistance line, TRON will fall to a low of $0.012. Neveetheless, the indicator has shown that the price will continue its fall until the RSI is below level 30. 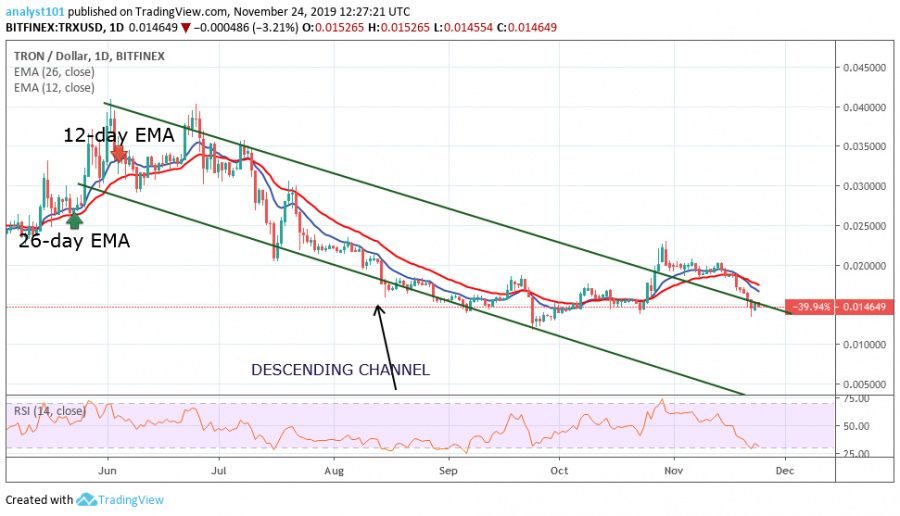 XLM has been trading in a bear market in November. On November 22, XLM fell to a low of $0.056 but the buyers defended the support as the market moved up. The support was the previous low in October but it moved up to test the overhead resistance at $0.080. The formation of the bearish triple top is responsible for the downtrend in November.

However, the coin fell and bounced back after testing the downtrend line. Stellar will move up if the downtrend line remains intact. Meanwhile, the price is making a U-turn after falling to the oversold region of the daily stochastic. Stellar is now in a bullish momentum as it revisits the high of $0.070 or $0.080 price level. 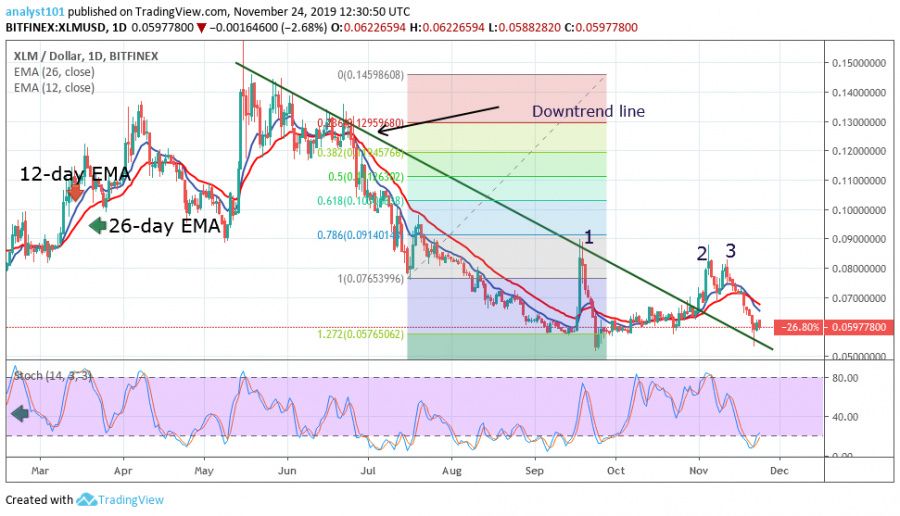