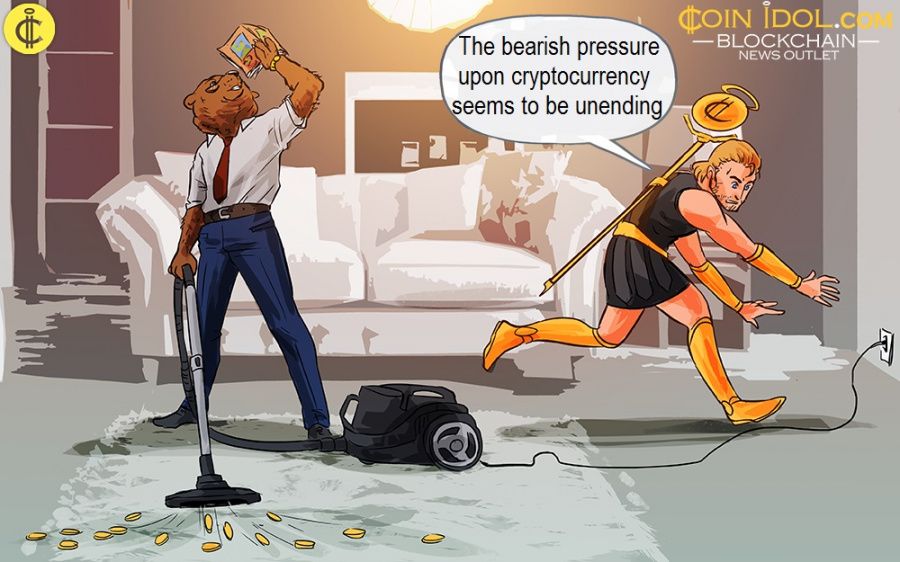 The coins listed below are in bear markets. The Bitcoin SV, Tezos (XTZ) and Cosmos (ATOM) have exhausted their bearish run as the coins rebounded from their respective markets. The coins are making positive moves in the bullish trend zone. Nonetheless, the selling pressure has been overdone on DASH and Binance coin. The bearish pressure seems to be unending.

Presently, BSV is not yet out of the bear market. Earlier on, BSV dropped from $240 to $60 low. At the $60 low, the bulls reacted and made an upward correction. The bulls break the downtrend line but got stuck at the $140 resistance. Aggressive selling at the resistance resulted in the coin to slump to the $80 low. Probably, the downtrend may resume if the price falls and break below the $60 low. Nevertheless, the Fibonacci tool has indicated that Bitcoin SV may fall and reach the low at 1.618 extension levels or the $20 low. This was as a result of a bullish candlestick testing the 0.618 retracement level. The decline may continue. 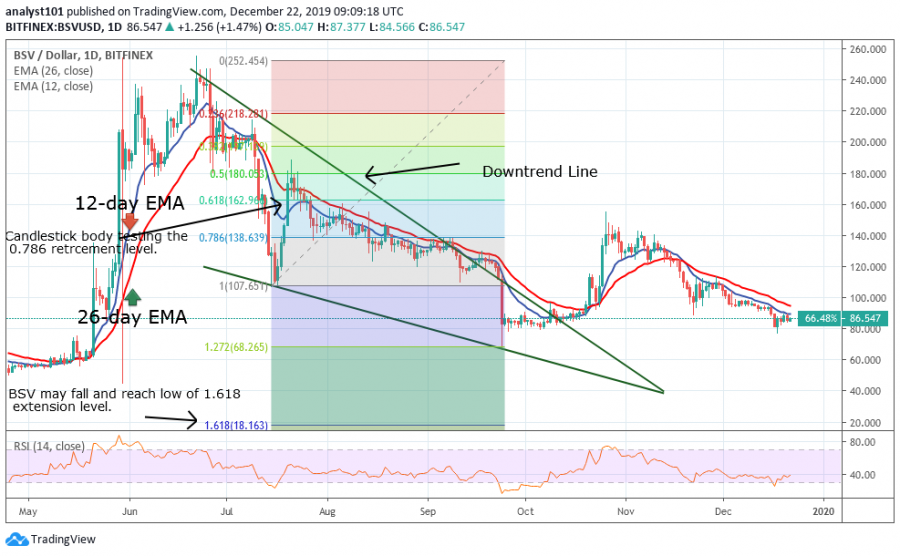 DASH is falling in a descending channel. Already, the market has fallen to $43 low and there is a likelihood of further downward move. Nevertheless, from the findings of the Fibonacci tool, the bear market ought to have been terminated at the 1.272 extensions or $60 low. The $60 low was the initial target because a bullish candlestick tested the 0.786 retracement level. Presently, DASH is trading at $43 after being resisted by the 12-day EMA. The MACD indicator is below the zero line which implies a sell signal. 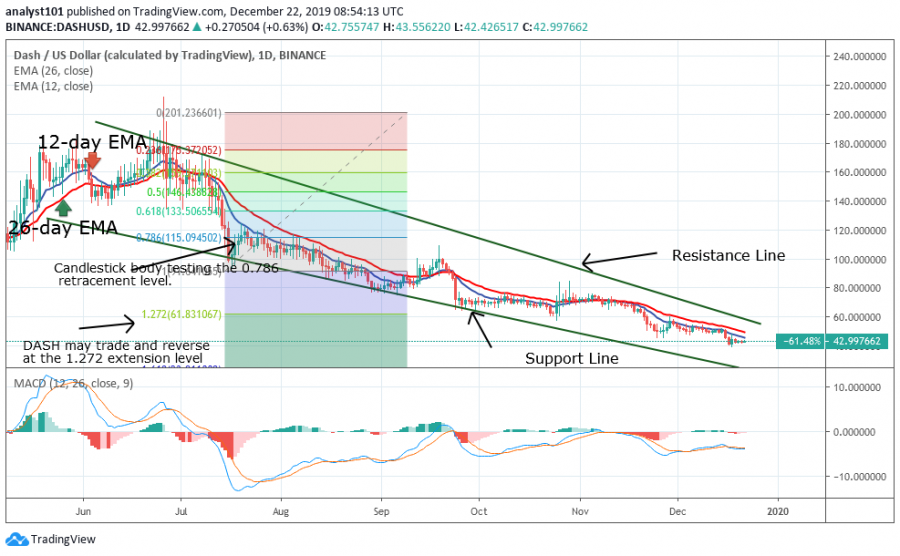 In a nutshell, the buyers and sellers seem to have an equal tussle for price possession. In May, Tezos (XTZ) was in a bull market as it reached a high of $1.80. After the resistance at $1.80, the tussle for price possession began. The bears took price downward and tested the support at $0.80 on four occasions. The bulls defended the critical support and Tezos moved up to the previous high of $1.80. The coin fell to the 26-day EMA at $1.54 after testing the overhead resistance. 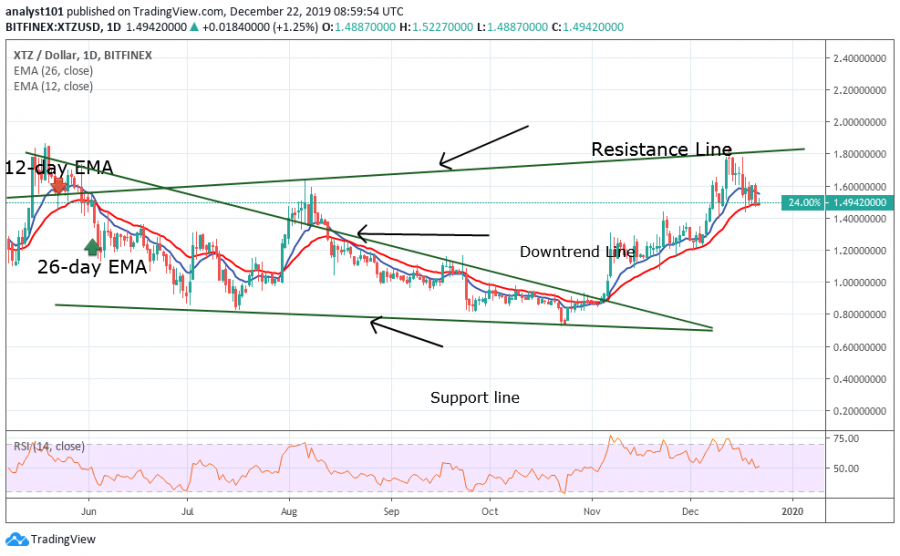 Cosmos is in a bull market as the coin reaches a high of $4.50. In the previous trend, the coin drops from a high of $7 to $2 low. In a swift reaction, the price was corrected upward. From the Fibonacci tool, Cosmos is likely to reverse at the 1.272 extension level which is a $2.50 support level. From the price action, the coin had reversed at the $2 support level. The coin will shoot up to $7.00 resistance if the resistance at $4.50 is broken. 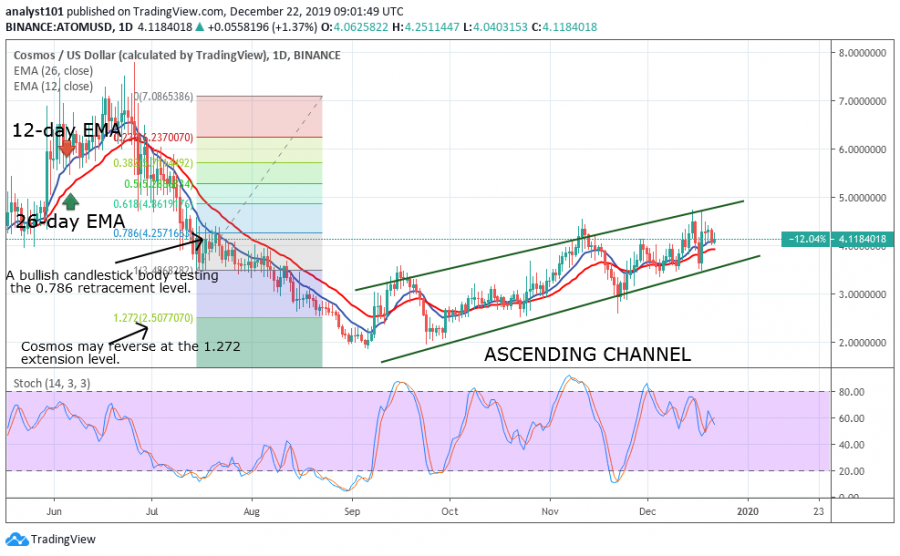 Binance Coin has been in a bear market since June. The coin has been falling in a descending channel. The coin is falling after being resisted by 12-day EMA. The downtrend may persist as there is price rejection. This has been confirmed as the candlestick tested the Fibonacci 0.618 retracement level. Undoubtedly, the coin will fall to the 1.618 extension level and continue its fall. The RSI implies that the market is approaching the oversold region. 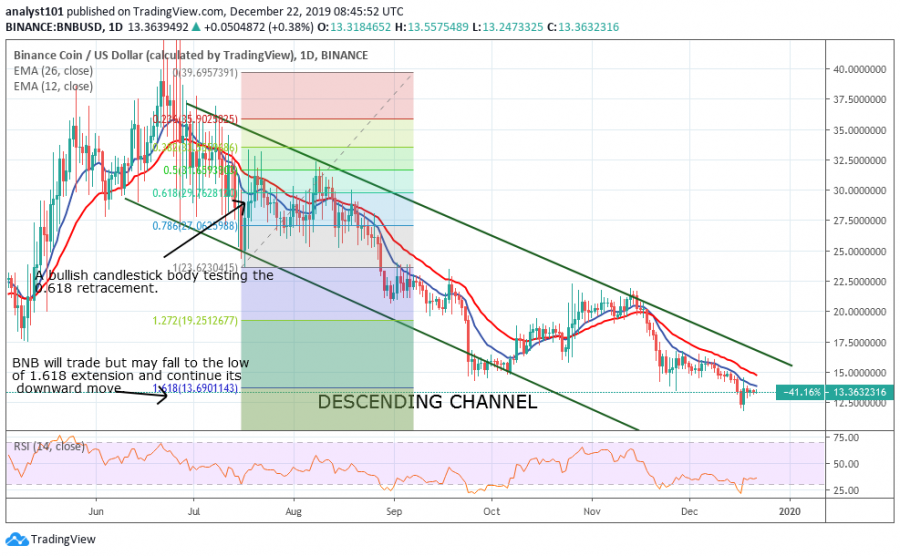