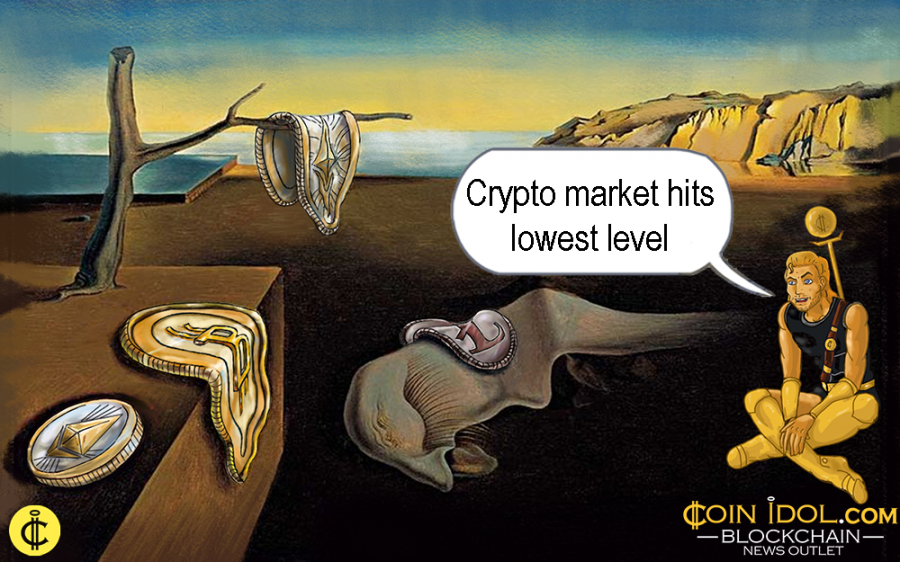 The Crypto market capitalisation dropped to the lowest level since last year on November 16, after Bitcoin registered a titanic bearish shift. The data from CoinMarketCap shows that cryptocurrency market has lost 11.6 percent during the last one day, scoring a daily low at USD$219.2 billion. The Crypto market has lost more than a quarter of its value, falling by 27.5 percent.

The powerful decline began after the U.S Security and Exchange Commission (SEC) revealed on Tuesday, August 7, that it shifted the Bitcoin ETF approval date proposed by CBOE. The deadline was officially set on November 30 this year. The market general thought suffered as many investors expected for a regulated Bitcoin ETF to add in huge new funds in the crypto sector.

Soon after the SEC proclamation, Bitcoin left USD$7,144 daily peak and dropped to the current point of USD$6,357, reaching a daily low at USD$6,226. Nevertheless, this level is not the lowest within these months, as Bitcoin was seen trading below USD$6,000 at the end of June this year. It automatically shows that the altcoins have registered a worse drop than Bitcoin, which aided the latter solid its supremacy.

The supremacy level of the gigantic and oldest Crypto soared to 48.83 percent, the pinnacle figure since December 20 last year.

On Wednesday evening, August 8, Aurora was the only crypto in the first 100 coins to indicate a small increase, with Tether being a more stable coin. The altcoins dived to their lowest level this year, with Bitcoin Cash and Ripple losing their acquired gains since November and December respectively.

According to CoinMarketCap, Bitcoin Cash was low 17.26%, Ripple lost 19.46%, Ethereum dropped 12%, EOS and IOTA dropped over 22%, while From, Stellar, Monero and Ethereum Classic has dropped by more than 15% each.

Nevertheless, this might not be the lowest point, as the bearish trend and direction might continue, since Bitcoin has a bigger room to its support level.