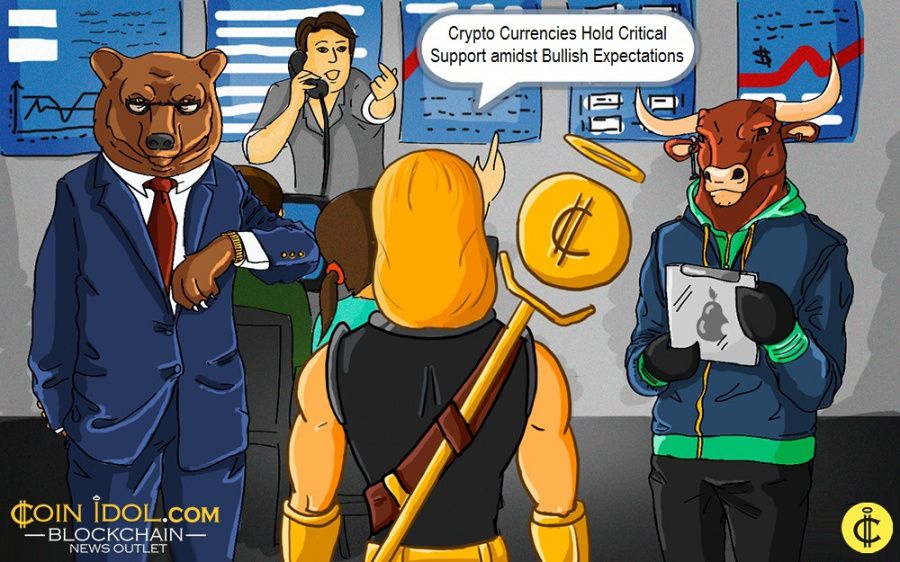 The crypto currency markets take on another dimension as they survive the overbought market conditions. Chainlink, Binance Coin, Monero and Huobi Token have resumed an upward move to retest the recent highs. Conversely, HOLO is still in a sideways trend but is still making an upward move

HOLO has been in a sideways trend since March 2019. HOT is fluctuating between $0.005 and $0.010. Nonetheless, the pair has dropped from the current price range since October 2019. It is currently trading at $0.0037 at the time of writing. Presently, the RSI period 14 is level 52 which indicates the pair is in uptrend zone. In other words, it is above the centerline 50 which means it is likely to rise. 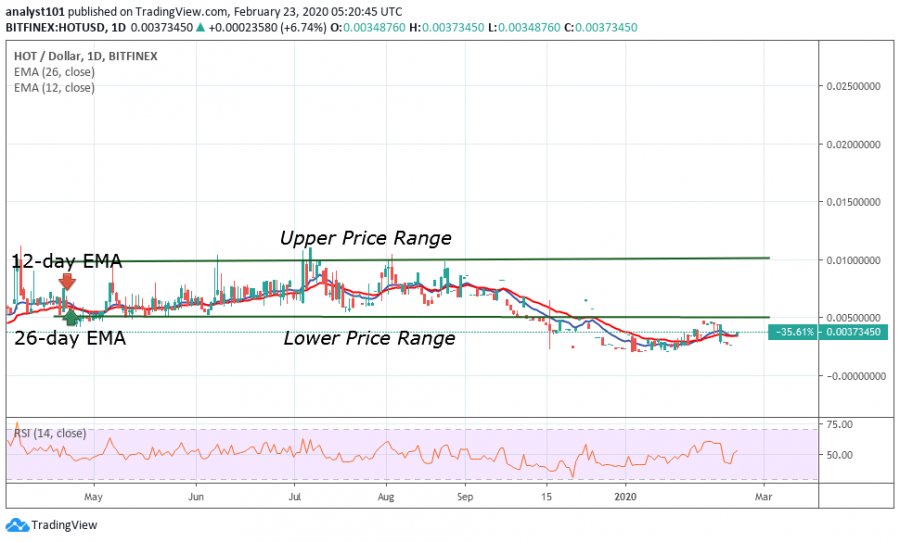 Chainlink is in an uptrend as it faces resistance at $4.87. The bulls have taken the price to the high of $4.78 but were unable to break above it on February 16. LINK fell to $4.0 low. The bulls made the second unsuccessful attempt at the resistance. LINK fell to the same low.

LINK now consolidates between $3.87 and $4.87. Expectantly, if the bulls break above the current resistance, the market will rally above $5.0. Conversely, if the bears break below $3, 87, LINK will depreciate to the low of $3.50. LINK is below 80% range of the daily stochastic indicating that the coin is in bearish momentum. LINK was earlier in the overbought region as the upward move was temporarily suspended. 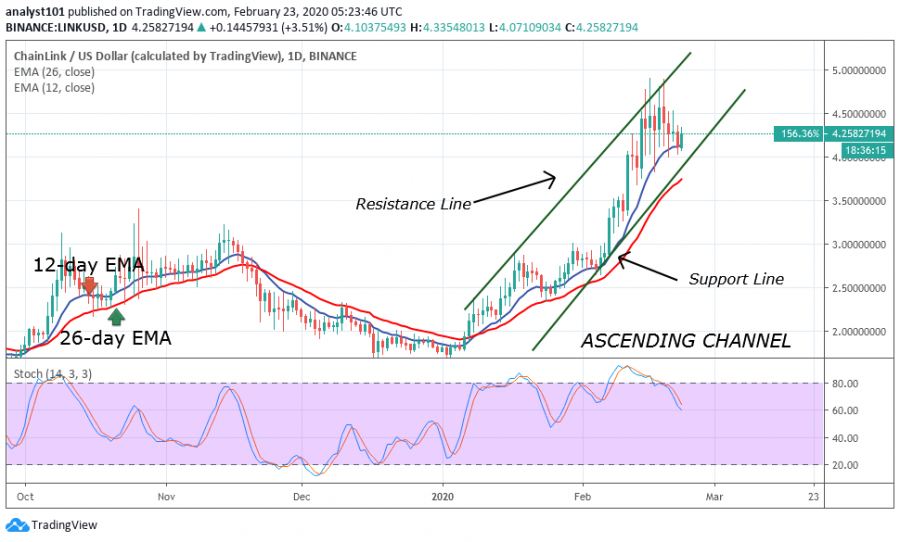 Recently, Binance Coin was in an upward move as the price reached a high of $27 on February 12. BNB fell into the overbought region that same day. In the region, buyers were available to push the coin upward. Instead, the bears emerge in the region to push BNB downward. Nonetheless, BNB is still on a downward move as the price fell to the support of 26-day EMA. The upward movement will resume if the current support holds. It is unlikely if the selling pressure will continue below the current support. BNB will drop to $18 low if the current support cracks. Currently, the RSI has dropped from the overbought region to level 54. BNB is still in an uptrend zone. 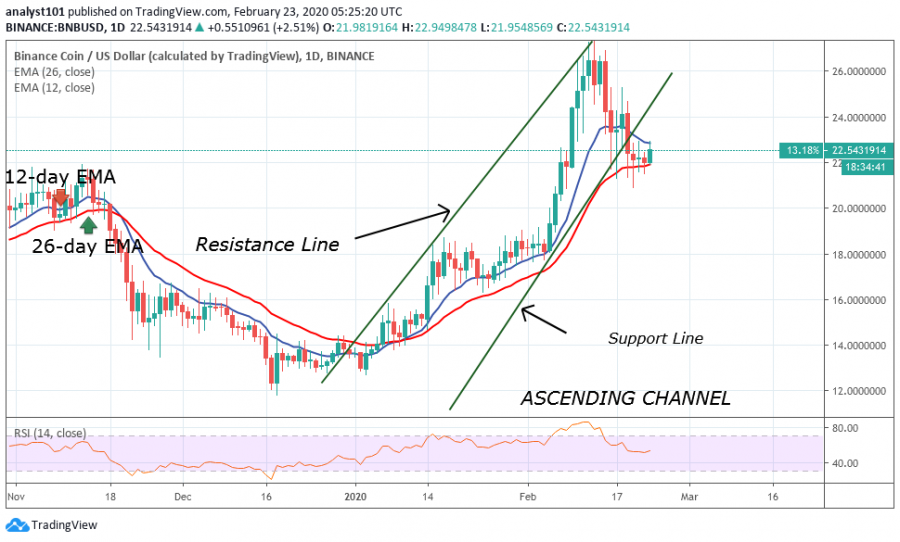 Monero is in an upward move but faces resistance at the $96 price level. The bulls attained the recent high since on February 12 but were unable to break above it. However, the second attempt to break above it was disastrous as it fell to the recent low at $76. Monero fell to the oversold region of the daily stochastic. In the current region, selling has been overdone as we expect the emergence of buyers. XMR is in an upward move as it is above 20% range of the daily stochastic. Monero will rise to retest the previous high. 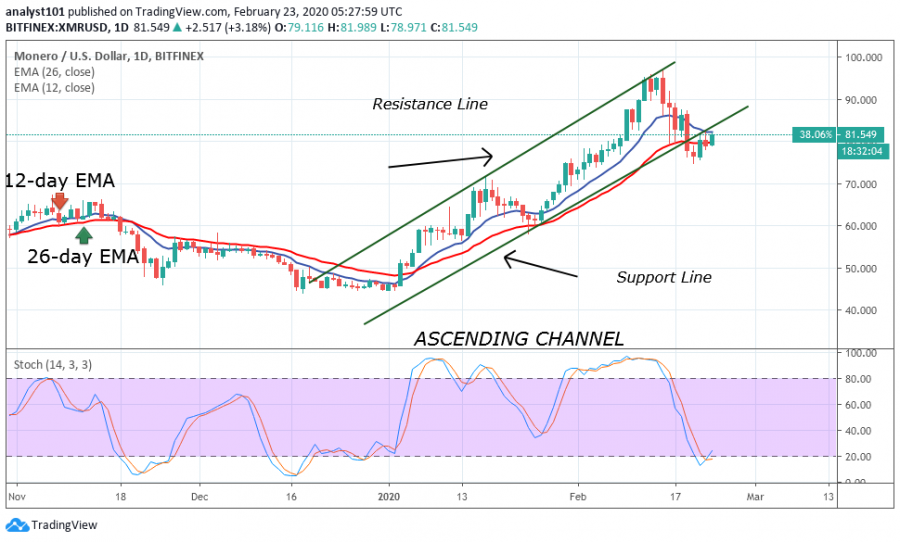 Huobi Token is in an uptrend as it made over 90% gains from the bear market. On February 15, HT rose to a high of $5.27 in a bullish trend. The bull’s attempts to break the recent high proved abortive as HT dropped from the current price level. HT dropped to a low of $4.60. Nonetheless, HT was in an overbought region during the recent high. Later, sellers emerge to push the coin downward. Meanwhile, the 12-day EMA provides support for the recent fall as the bulls take another upward move. HT is now trading at level 62 of the RSI period 14. 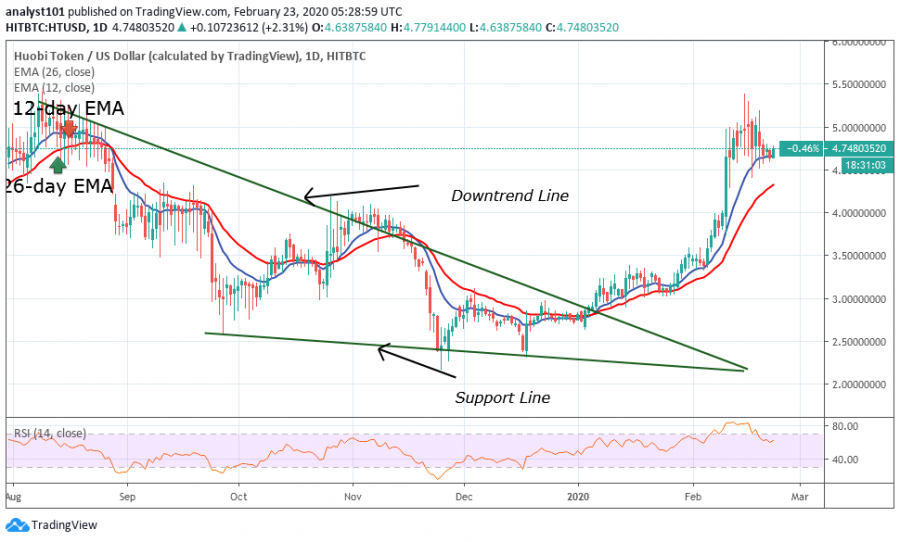