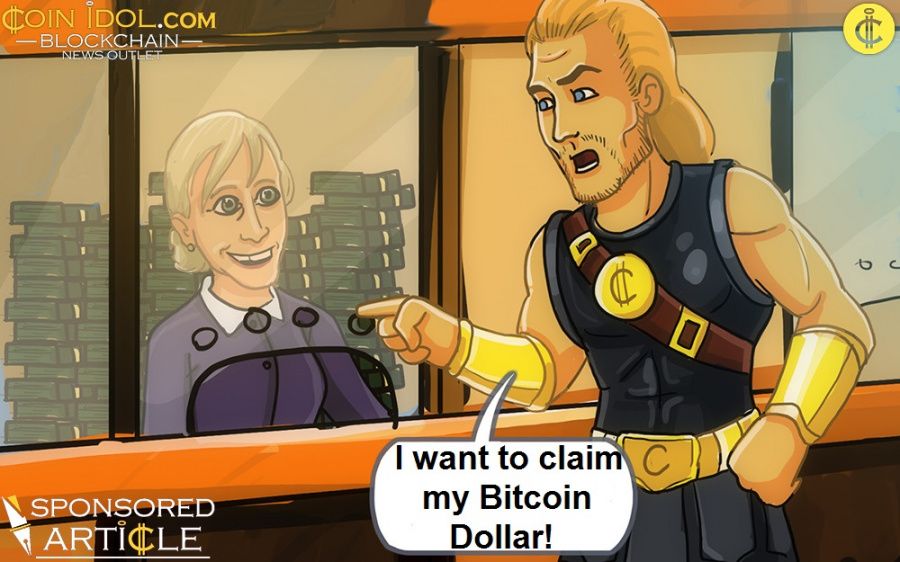 Anyone who owns bitcoin will soon be able to receive a new Artificial intelligence cryptocurrency.

As of Feb, 28 2018 on the bitcoin AI blockchain, another alternative version of the protocol will be launched, resulting in a variant that's being branded bitcoin Dollar ( BTD).
The project, which seeks to improve bitcoin's technology by changing how its competition for rewards is conducted, is to launch via an unique process called a "Split."

What is Bitcoin Dollar?

● First, by introducing POW and PoS consensus mechanism, voting and bookkeeping rights can be separated, which prevents abuse or control of the system by any party.

● Second, With built-in smart contract, digital assets can be issued and distributed, and applications can be built on blockchain, making BTD a valuable and functional coin.

● Fourth, bitcoin dollar wants to change how mining works by making it so the most powerful mining machines (called ASICs) can no longer be used.

● Fifth, by attracting more people to this system over time, it hopes to free the bitcoin network from the large companies that offer these products, and it argues, command undue influence on the network.

● Sixth, there are approx 370 million Bitcoin accounts in 8000 exchanges and wallets worldwide. Bitcoin in those accounts are so minuscule it average 0.006670 BTC per private key and many users has lost or not claimed their BTC. Apart from this 28% to 45% bitcoin are unused or lost in time. Therefore, those unclaimed Bitcoin Dollars will be distributed to early birds or contributors. As a matter of fact, about 60% exchanges have not shared Bitcoin cash or Bitcoin gold to their users.

Instead of scaling bitcoin to support more users, bitcoin dollar tweaks bitcoin in an effort to "make bitcoin decentralized again." This, proponents argue, will make the network, designed to offer an egalitarian way to send payments digitally around the globe, more accessible to users.

And while created via the same mechanism, bitcoin dollar differs from bitcoin cash and gold in a few ways, most notably in its distribution.

● The bitcoin dollar cryptocurrency is set to be created in advance (prior to the code being open-sourced to the public).

● Bitcoin Dollar is a community-driven project, no one will stack claim for the unclaimed BTDs.It will be distributed among the community according to their contributions.

● Once this distribution is over, the team claims it will launch the cryptocurrency so that users can redeem their coins.

Of course, while it aims to become the de-facto version of AI blockchain, others might consider bitcoin dollar an "altcoin" – the term has long been used to denote any cryptocurrency launched using bitcoin’s existing code, but that has an alternative market or use case.

Do I Have Bitcoin Dollar?

All bitcoin owners will receive the cryptocurrency at a rate of 1 BTC to 1 BTD, setting the stage for possible market activity.

But, that's not to say it's totally intuitive to retrieve.

One quirk is that it'll be easier to redeem the funds from wallets or exchanges that recognize the cryptocurrency. The easiest way, then, to retrieve the bitcoin dollar is to move bitcoin to a wallet or exchange that supports bitcoin dollar, or to hold bitcoin in a wallet where you own your private keys (rather than holding them with an exchange).

To date, 20 exchanges and wallets promise to support bitcoin dollar once it launches, according to the project's website.

Who Is Behind Bitcoin Dollar?

The team behind the split appears to be a relatively small group.

Seoul-based Founder of ZERO and Bethe Funder Lao Tang, who's an outspoken critic of the state of bitcoin mining.

His company ZERO develop security frameworks for exchanges and sells mining equipment, including CPUs and GPUs, the type of computing hardware bitcoin dollar is supposed to rely on.

Since first introduced earlier this summer, the team has expanded to include lead developer Martin Sheldon (Ex googler and Blockchain Robotic scientist), as well as a team of five other volunteers who are now working on developing and promoting the cryptocurrency in their spare time.

How do People Feel About Bitcoin Dollar?

All that said, for those interested in exploring or using bitcoin Dollar, it's worth every single bit of investments as with POW and PoS consensus mechanism, voting and bookkeeping rights can be separated, which prevents abuse or control of the system by any party. Users can maintain the policy discourse as long as they possess coins, thus achieve the true autonomy.To create a sustainable environment within Bitcoin dollar community, we have formulated BTD chain to contribute, refer, promote, develop and share. This will help us to distribute unclaimed BTDs among our community and gain trust to reach our objectives.