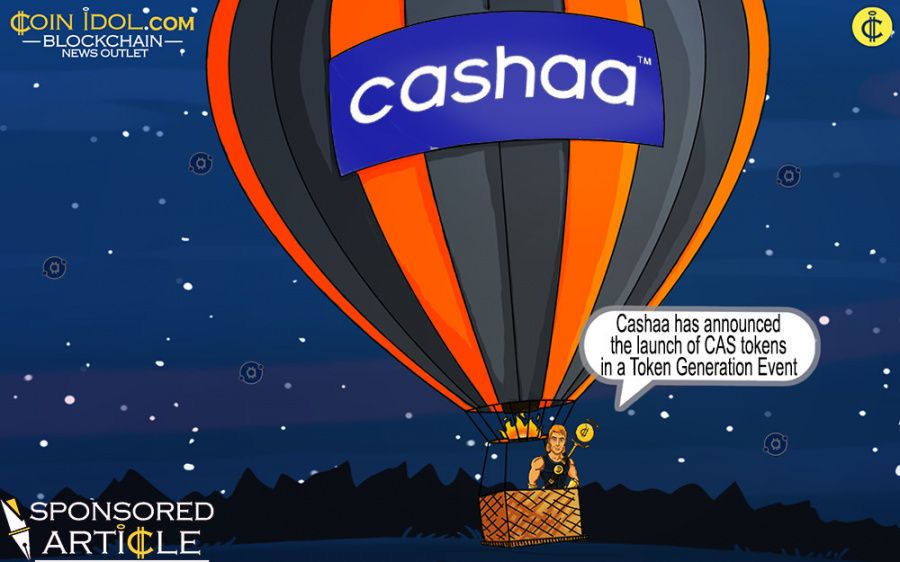 October 13, 2017, London, Financial Blockchain company Cashaa has announced the launch of its CAS tokens in a Token Generation Event (TGE) which will take place on November 6th with a pre-sale kicking off October 20, 2017.

Cashaa - rated as one of the Top 100 Most Influential Blockchain Companies in the world - is building ‘The next generation banking platform for the next billion’ which will potentially enable billions of banked and unbanked users to access the financial services.

The financial crisis revealed significant weaknesses in the existing financial system while more than 3.5 billion people are still unbanked or underbanked with limited or no opportunities to participate in the global economy. Transferring money for remittance or money lending across international borders is still complicated, time-consuming and expensive. Existing systems are slow and full of intermediaries, triggering higher exchange rates, weak counter-party risk checking, bureaucracy and extensive paperwork. The recent emergence of cryptocurrencies showed a silver lining to solve this issue. However, it turns out that consumers and businesses are struggling to leverage the benefits of the Blockchain infrastructure due to poor Usability, non-customer centric approach, and improper legal implementation.

Cashaa is a gateway to consumer-centric and affordable financial products aimed at consumer adoption of Blockchain without having to understand the technical details of Blockchain technology. Cashaa’s wallet system, integrated with the peer to peer exchange with full spectrum of fully digital financial services, enables its community to save, spend, borrow and get insured, with a simplified user experience in a legally compliant way.

Cashaa is building its infrastructure on the Blockchain and utilizes artificial intelligence and biometric systems to empower mainstream adoption of payment and financial products with full security. Cashaa’s open platform approach also allows traditional financial institutions, banks and payment processors to reinvent and connect their products and services on the Blockchain, making them more efficient, convenient and globally accessible.

To implement its vision, Cashaa is launching its Token Generation Event (TGE), issuing CAS tokens on the Ethereum Blockchain. CAS token holders will be able to access premium services, creating a credit score and to participate in the governing mechanism of CAS tokens.

“Cashaa started as a blockchain-based international money transfer marketplace and we have seen exponential growth over the past few months. We are now evolving it as a Banking and Payments solutions provider with products for lending, international payments, prepaid cards and insurances. The overall goal is to leverage Blockchain technology to build a customer centric, fully digital financial platform which is universally accessible and simplifies the user experience”.

Cashaa’s token sale is one of the few token sales backed by a unique proven platform which has been beta-testing with 12,770 registered users from 141 countries till June 2017. Following these achievements, Cashaa features among the ‘ Top 100 Most Influential Blockchain Companies in the world’. The successful initial tests encouraged and inspired the team on their mission to fully exploit the power of the ‘Internet of Value’.

The team and the advisory board is composed of passionate people with more than 200 Years of payments and banking experience. The team includes successful entrepreneurs who built their companies from scratch which are now part of Fortune Top 15 companies. Cashaa’s advisory board includes MIT scientist & renowned tokenomist Dr. John Henry Clippinger, Blockchain News publisher Richard Kastelein, Winner of Entrepreneur TV show “The Apprentice” Tim Campbell and executives from Central banks & Fortune 500 companies.

One billion CAS tokens will be generated during the TGE event out of which 51% (510,000,000 CAS) will be available for the community. At Cashaa, they consider it as a strong signal of trust if the community owns more than half of the CAS tokens from day one. All the unsold tokens will be burned to protect buyers while tokens held by company and team will be locked using Smart contract with three years of vesting period.

The CAS token launch will enable us to expand into new geographies and drive innovation” Kumar added.

From 20th October, 1700 UTC, to 30th October, Cashaa will start its pre-sale for registered participants. To give every community member a fair chance, there will be a maximum cap of 10 ETH per participant during the crowd sale starting from 6 November, 1700 UTC, the TGE will start, until the cap is reached. After the TGE, the CAS tokens will be traded on cryptocurrency exchanges.

For more information on how to participate, visit https://Cashaa.com