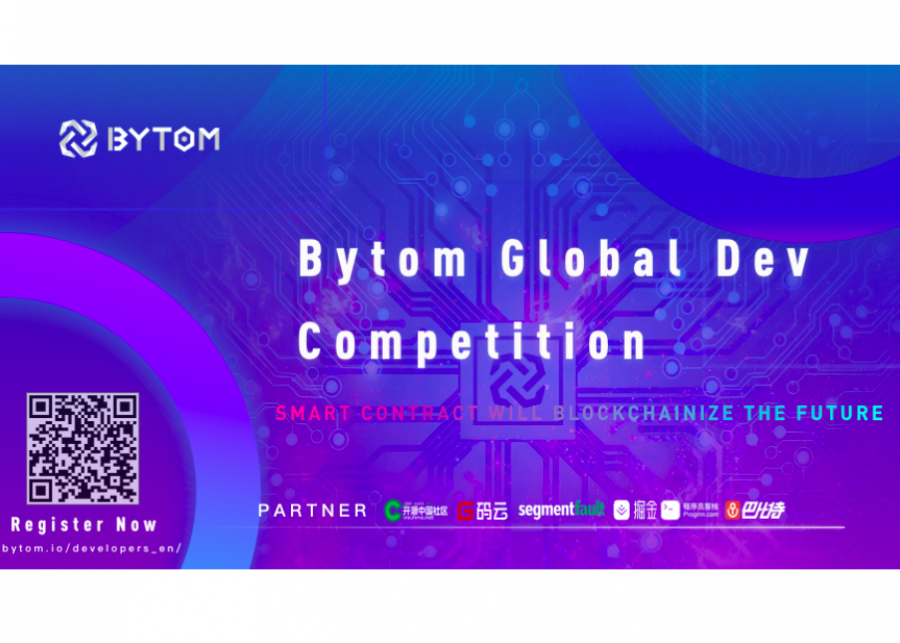 Blockchain Protocol Bytom has announced the launch of its Global Dev Competition, with a prize of 2,000,000 BTM available.

San Francisco, USA –  Blockchain Protocol Bytom has announced the launch of its  Global Dev Competition, an event committed to promoting the application of blockchain technology and strengthening the exchange and collision of technical peers in both China and abroad. This competition aims at finding more technology talents, strengthening Bytom’s development capability as well as enhancing Bytom’s sustainable open-source ecology.

In order to motivate developers to participate in this competition, 2 million BTM tokens will be awarded to winning teams. In addition, the organizers will provide technical guidance and business incubation for the outstanding innovative projects.  Registry for the competition is now open with an online preliminary contest where developers will upload their coding to the designated website. Two weeks after the deadline of the preliminary, a shortlist will be announced and enter the final competition. The final is a closed two-day development contest that will be held from October 18th to 21th in Hangzhou, China.

Technical support including a  developer guide has been provided for participants to better understand Bytom. As part of Bytom Global Dev Competition, a Bytom Developers Conference will also be held in Silicon Valley at the end of October, 2018.

What can Developers do on Bytom Public Protocol?

Bytom offers three directions for developers. First, a tokenized economy. Developers can establish a tokenization logic, issue tokens, and then create token-based applications. For instance, Joorschain, founded by Swiss listed companies in the digital advertising industry as well as a Hong Kong TV station has begun to tokenize their assets based on Bytom blockchain and carry out their token-based development.

Second, supporting tools, such as the Btm-scan blockchain browser developed by Bytom team which can be used to explore and search the Bytom blockchain for transactions, addresses, tokens, prices and other activities. Another example is AI Miner developed by Discus-Fish/F2Pool. It is a one-button mining optimization tool that facilitates mining for large mining equipment, resulting in a large-scale increase in Bytom’s computing power.

Third, DAPP. Based on Bytom blockchain, developers could develop asset-based applications such as equity, bonds, and financing.

Bytom launched its mainnet this April and the release of smart contract in July marked the establishment of its core, which will further promote Bytom’s commercialization. Bytom uses its own  Equity language, which is a Turing-complete and interpretive high-level language. It is convenient to operate the assets on Bytom and flexibly integrate into various asset business scenarios.

Bytom Blockchain Protocol is an interactive protocol of multiple byte-assets. Heterogeneous byte-assets (indigenous digital currency, digital assets) that operate in different forms on the Bytom Blockchain and atomic assets (warrants, securities, dividends, bonds, intelligence information, forecasting information and other information that exist in the physical world) can be registered, exchanged, gambled and engaged in other more complicated and contract-based inter-operations via Bytom.

The mission of Bytom is to bridge the digital world and the physical world, and to build a decentralized network where various digital and physical assets can be registered and exchanged. The goal of Bytom is to become the world’s largest dedicated public blockchain platform, connecting various asset classes to the blockchain, enhancing the liquidity, security, and value of these assets.

Bytom is the source of this content. This press release is for informational purposes only and should not be viewed as an endorsement by CoinIdol. We take no responsibility and give no guarantees, warranties or representations, implied or otherwise, for the content or accuracy. Readers should do their own research before investing funds in any company.