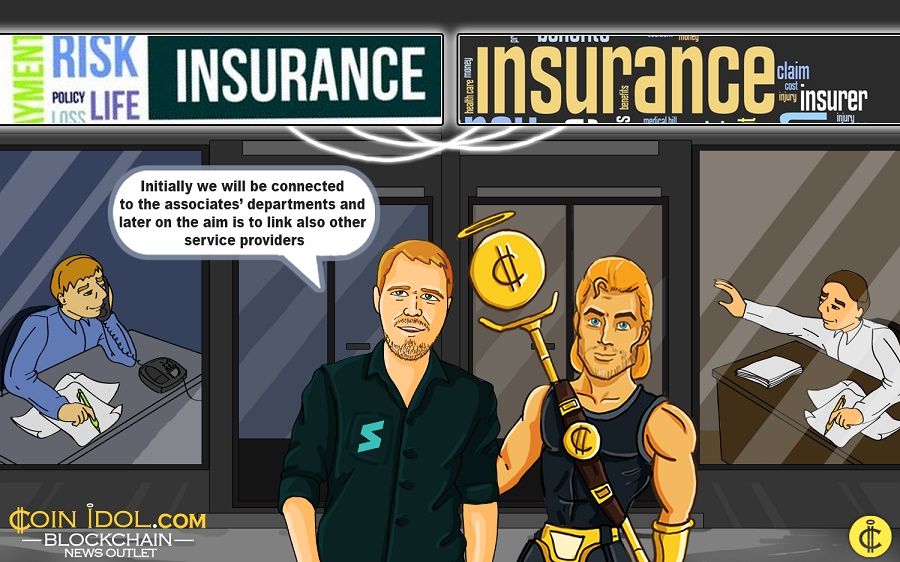 Synaphea, a simple word but its meaning has great power. This word is used to explain the mutual relationship between two or more events or circumstances, that change simultaneously because of causal links between them.

This is an innovation that the team has presented us at the recent Bitcoin & Blockchain event in Athens, a real-world application on the blockchain.

George Theofilis has explained that this Blockchain application is designed to be used by insurance companies like Groupama. At an early stage, it will connect the internal interface of an insurance company to insurance agents by distance.

George Theofilis: ‘Initially, we will be connected to the associates’ departments, and later on, the aim is to link also other partners of the diagnostic centers and other service providers. We intend to create a secure network so they can exchange information for their clients or for themselves with safety. The appropriate workflow will be designed and applied on this network in order to serve the process of the company. This is the piece of "infrastructure" that we want to start from.  The first insurance application will be a chatbot for the issuing of contracts. We will monitor all stages: offer, agreement, payment and use of terms.'

CoinIdol: ‘What kind of dangers are lurking? In terms of jobs as a reduction or increase of staff, does it involve extra costs such as logistical infrastructure, or not? ’

GT: ‘Τhe insurance company has to maintain the node at Hyperledger, also, the partners have to maintain their nodes. As many are online the more secure is the network.By using the Hyperledger there is no need for mining, simply the nodes involved must know each other without necessarily being trusted. We offer support for these nodes, and the design was made so that the IT department of the company has the least involvement possible. Initially, I don’t think that this system threatens jobs directly, but if this works, then I can say that we will have jobs that will be replaced.

Another risk, that is extremely important, is personal data.This is why we chose to develop our platform on a permissioned DLT, like Hyperledger. All sensitive data is posted after being passed by a hash function, in order to guarantee the irreversibility. I can’t predict if the encryption that we used will be refuted in the future.’

CI: ‘What dangers are you trying to avoid here by not using a DAO or asset?’

GT: ‘Originally, Hyperledger is well known among the companies, already there are over 100 companies supported by IBM, which has over 120 contributors and all that in just one year since December 2015. It is a well known private blockchain and, according to my personal belief, the most promising.’

CI: ‘But on the other hand, we have the relevant Microsoft tools like Azure. Are you considering the future use of these? Whether to enable as an interconnection system or to be applied to A.I.?’

GI: ‘Clearly the system developing form is designed to be modular and can work with another public DLT. Simply, we chose for now to exclude a public blockchain, based on the grounds that it is too difficult for another system to accept that some information will be as safe and hidden, not public in case of exploration of personal data. We also want to look at both analytics and A.I pieces to improve workflow. Besides the first application, we prepare it to enable new tools for NLP to design a chat-bot. Finally, the Blockchain we see as a secure channel to transfer information between the various organizations.

CI: ‘Is there a member of your team working in insurance?’

GT: ‘No, our teams are all experts in the IT development, George Efthymiou, Andreas Paradisopoulos and Dimitris Giannakis. We are the 1st winner team at Insurance tech hackathon sponsored by Groupama’