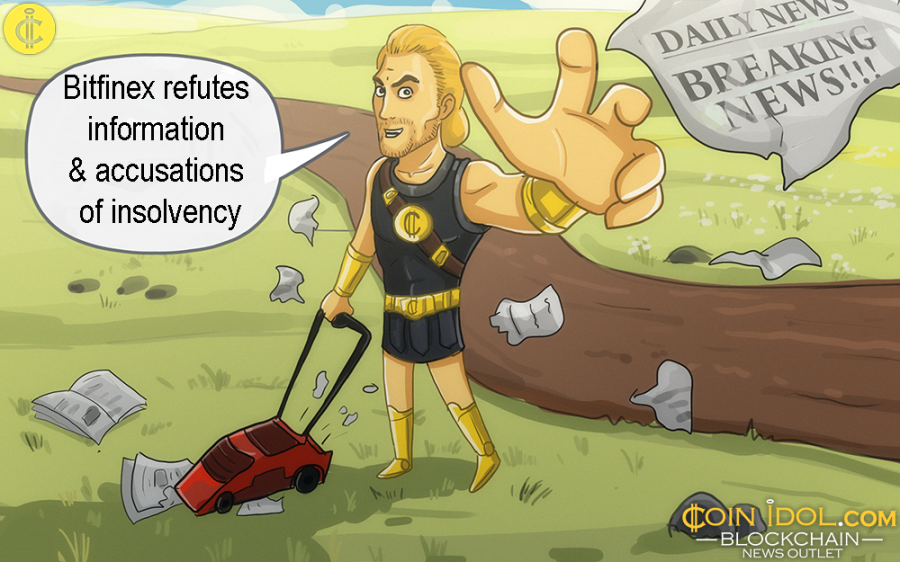 Bitfinex, a Hong Kong-based cryptocurrency bullish exchange, has retaliated against claims that it is insolvent and disclosed wallet addresses seeming to indicate it holds more than $1.5 billion in digital currency assets.

The firm, which shares management with Tether, revealed on Sunday, October 7 that it isn't insolvent, and a consistent flow of medium articles saying otherwise isn't going to change this.

Bitfinex said that these allegations are "a targeted campaign based on nothing but fiction."

The company also disclosed cold wallet addresses holding Bitcoin (BTC), Ethereum (ETH) and EOS, said to be proof of the total sum of the relevant assets it presently holds.

Going by the addresses given, Bitfinex holds around 148,467 BTC, 1.7 million ETH and more than 35 million EOS. These digital currencies are worth $1.5 billion, according to the data from CoinMarketCap.

Bitfinex's refutation follows a recent article on Medium that was published on Saturday, October 6 which said the exchange is insolvent and advised users to start withdrawing their assets.

Nevertheless, in its reaction, Bitfinex says that "both digital currency and fiat withdrawals are working as normal," adding:

"Verified Bitfinex users can freely withdraw Euros, Japanese Yen, Pounds Sterling and U.S. Dollars. Complications continue to exist for us in the domain of fiat transactions, as they do for most cryptocurrency-related organizations."

The Medium article called on the Tuesday, October 2 Bloomberg report as evidence that the Puerto Rican Noble Bank is cogitating a sale and has shunned giving its banking services to Bitfinex and Tether, the venture that is behind the U.S dollar-pegged cryptocurrency USDT.

The Metamorphosis of Bitfinex

On that matter, the exchange revealed that the information and all accusations put on Noble Bank are insignificant on its "operations, solvency or survivability."

The news emerges as the current strife covering Bitfinex as one of the longest operating digital currency exchanges. In January of this year, both Bitfinex and Tether were purportedly summoned by the U.S Commodity Futures Trading Commission.

Some months later, the firms published a report through a legal company, rather than an auditing company - that claimed the firm had $2.55 billion in U.S dollars reserves to back $2.54 billion worth of USDT which were circulating at the beginning of June.

However, the document covered one point and didn’t give proof of its level of collateralization for the rest of the periods.