Liechtenstein Bank Chooses Stablecoins Over SWIFT as They Are Gaining Popularity 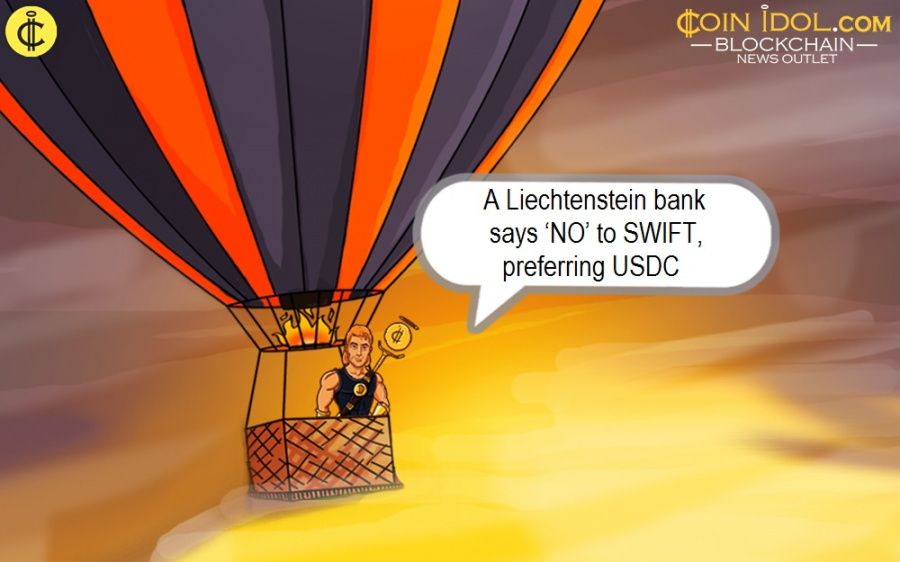 As the world becomes increasingly digital, the financial institutions we are used to having to adjust and turn to innovations. While some of them are exploring the possibility of developing and launching their own digital currency, others are looking to take advantage of the existing technologies such as stablecoins.

Thus, Bank Frick based in Liechtenstein is going to offer its clients using the USDC stablecoin for cross-border transactions instead of the widely used payment system SWIFT. As the Daily Hodl news outlet reported, this move is aimed at reducing transaction processing time. On the other hand, as USDC is pegged to the US dollar, it is just as safe and reliable as using the USD itself.

In fact, Bank Frick has been the most cryptocurrency-friendly bank in Liechtenstein and probably in the world. Previously, it applied stablecoins for customer loyalty programs based on the StableCoin-as-a-Service concept. This concept facilitates interaction between program participants while enhancing its security.

Generally, such a policy is not surprising from an institution based in Liechtenstein as the country has taken the course to the development of blockchain and cryptocurrency industry. As coinidol.com, a world blockchain news outlet reported, the Liechtenstein government is developing a friendly framework for growing the industry, which resulted in more than 80 companies starting their business within the country.

Being small in size, Liechtenstein lacks natural resources and territory to build up other industries, so it decided to use its intellectual and digital potential to grow its potential and get a more significant position on the European arena. Having followed the lead of Switzerland, Liechtenstein strives to become the second Crypto Nation in the world.

Liechtenstein with its friendly policy on cryptocurrency and stablecoins makes a contrast to other European and global banking institutions as they show cautiousness about these types of digital assets. For instance, back in May 2020, the European Central Bank issued a report on possible risks associated with the use of stablecoins. Though admitting the importance and advantages of stablecoins, it still warned potential users to be cautious before choosing to deal with these assets.

Earlier, the Financial Stability Board (FSB), a regulator behind G20, issued its recommendations trying to put stablecoins within the existing regulatory framework, stressing the need to keep an eye on this underregulated industry.

Such close attention was probably caused by the growing popularity of stablecoins, as their market cap has been growing significantly. As of now, the market cap of stablecoins composes 4% of the entire cryptocurrency market, with separate stablecoins seeing a significant surge. For instance, Tether, the first and the most popular stablecoin has faced a more than 100% growth from $4.1 billion to $9.2 billion since the start of 2020.

USD Coin, the stablecoin chosen by Bank Frick, has its market cap increased to $0.73 billion. The trend towards stablecoins has become particularly significant since the outbreak of COVID-19 pandemic. As the disease made people seek for contactless payment means, stablecoins have drawn overall attention with their advantages. Considering the fact that this trend is expected to grow further, Liechtenstein’s position seems to be very fortunate for the country’s economic development.

Tags
Stablecoin Liechtenstein Banking SWIFT Finance Innovation Digital currency Technology Market
Most Popular
May 20, 2022 at 11:30
Price
Ethereum Is in a Confined Range as Bulls and Bears Reach Equilibrium
May 20, 2022 at 10:38
Price
Ripple Consolidates above $0.38 as Buyers Emerge in the Oversold Region
May 19, 2022 at 15:30
Price
TerraUSD Falls Significantly as Bears Gain More Grounds
May 19, 2022 at 13:00
PR
A Review of Olympus4x.com Broker
May 19, 2022 at 12:20
News
How Gaming and Online Casino Promote the Use and Popularity of Cryptocurrency
More