Why will BMCHAIN’s capitalization grow? 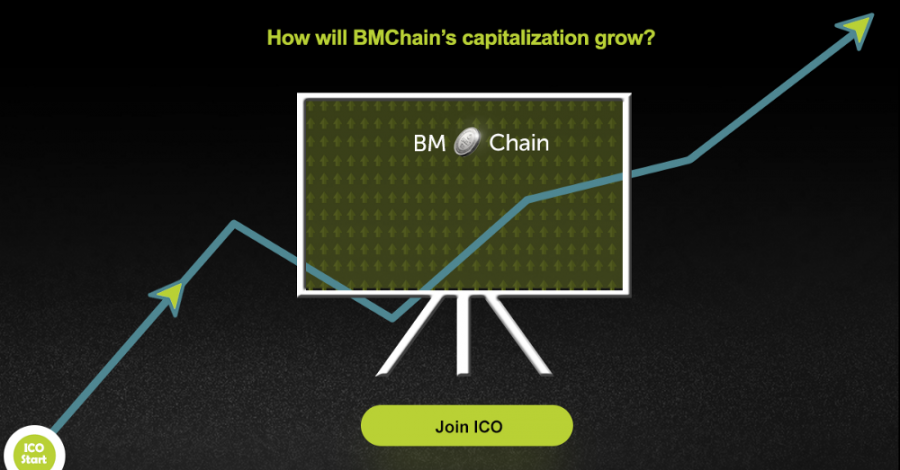 The founders of BMCHAIN presented a strategy for the development of the project in the coming months and shared further plans to promote and increase the capitalization of the platform. The first results of the completed pre-IСO allowed us to reconsider the positioning of the project and to outline the points of its growth.

To achieve maximum capitalization and increase the active audience of the platform in a short time, BMCHAIN ​​team developed a plan for the development of the project for the next six months.

The list of planned tasks aimed at the development of the project and the growth of its capitalization:

●       Connection of the first 100 partners from different areas to the sales of goods and services for BMT tokens.

* For example, a product or service costs $300. The same item can be bought for tokens at a price of $150. A discount will be fixed in fiat currency. Any partner will sell the product or service with a significant discount, so that it is more profitable for the buyer to make a purchase in the tokens. This model should lead to an increase in the token cost and demand over time to purchase services and goods in BMT.

4. Negotiations on partnership with big banks and other large private and public entities;

5. Opening an office in Moscow;

6. Expansion of the network of partners for effective promotion of the project results to the crypto community;

●       Publication of news about the development of the project on more than 100 crypto-currency websites and 10 major online media.

●       Publication of weekly reports for project participants on current results and plans for platform development.

7. Implementation of the affiliate program in the core of the project.

8. Carrying out a comparative analysis of Steem, Golos and BMCHAIN ​​parameters and preparing a plan to justify and calculate the indicators that ensure the rapid growth of BMCHAIN ​​project parameters, which can be achieved, based on the current capabilities of the BM community and its active growth by attracting a new audience.

9. Deployment of the test network on a separate blockchain solution for testing platform functionality.

At the moment the ICO project is live. Participants are entitled to the 20% discount, which will be valid until September 24.

In total, more than $ 1,000,000 has been collected in the framework of the crowdsale. Thus, the soft cap, set before the ICO, was successfully achieved. As of September 21 more than 15,000 people have registered in the system, 3,222 partners confirmed their desire to connect their project to the platform and accept the BMT token as the payment for goods or services.

A major role in the development of the project is played by the decision of the largest business audience in Russia to join the platform even before its development, which means that more than 200,000 entrepreneurs by generating demand for a token and creating activity on the BMCHAIN ​​site will broadcast the advantages of the platform in various channels and spheres.

Brief history of the foundation of the BMCHAIN.IO project and the logic of the decisions made

The idea of ​​a digital decentralized site for the BM community and other interested communities arose long ago. However, a real opportunity to begin its implementation appeared only in 2016 after the launch of the first social network Steemit.com and its Russian version, the Golos project.

Having studied the possibilities of high-performance blockchain solutions based on Graphene and having carried out the basic integration with the existing one, it became clear that the use of the existing solution didn’t allow implementing the mechanics and the system of economic incentives necessary for organizing effective interaction between the members of the BM community and other interested structures.

As a result, by the spring of 2017 a decision has been made to develop the blockchain system that would allow the implementation of all the necessary parameters and economic incentives for the efficient operation of the decentralized platform.

Analysis of the parameters of existing solutions demonstrated that their main disadvantages were the low level of involvement of new users in the work and weakly week economic justification of new tokens, which reduced the stability of such a system.

Investigations of the possibilities of socially oriented blockchain decisions were carried out jointly with the specialists of Analytics Insight (AI2).

“AI2” company, having advanced experience in modeling complex socio-economic systems and unique patented software MIDAS, proposed the introduction of its developments, which automatically calculated optimal parameters of complex economic systems in the core of the developed blockchain platform.

The use of the MIDAS econometric algorithms should allow us to calculate the most important parameters of the blockchain system in such a way that the key performance indicator chosen by users, for example, the weekly growth of the number of active users increasing at the maximum possible rates with the most efficient use of current system resources. To do this, it is necessary to calculate the volume of required emissions and the coefficients of user’s rewards in such a way that the scenarios useful for the system and users receive maximal profit.

In the end, it became obvious that it is necessary to calculate the user's reputation coefficient, which determined the amount of rewards for both the user and those with whom they would communicate within the framework of the system being created.

After the completion of a series of tests and confirmation of the high probability of implementing such a system, preparation for the ICO has been started. With a large audience and proven performance indicators, BM and Analytics Insight companies presented the joint BMCHAIN.io platform at the blockchain conference in St. Petersburg, which took place on July 22, 2017.

A month later, the presentation of the BMCHAIN ​​gave the start to the preliminary fund-raising for financing the development and launch of the project.

The preliminary crowdsale allowed to collect about $ 1,000,000, but also revealed significant shortcomings in the project positioning model, which led to the reduction in the fundraising period and simplification of the mechanism for conducting it. The original model of attracting funding assumed active involvement of an external audience of people unfamiliar with the results and principles of the work of the BM community. However, the ICO process itself demonstrated a low percentage of involvement of users unfamiliar with BM due to the high complexity of the project concept and the absence of some important parameters such as participation in the platform of partners and consultants famous in the cryptocurrency community, a clear scheme of the project monetization, as well as other risks existing in the crypto economy.

In order to immerse the project audience in the process of the platform development, the BMCHAIN ​​team plans to publish weekly reports on the work and results achieved in the blogs Golos, Medium, Reddit, Bitcointalk, and via email and Telegram mailings.