Ripple Could be Threatened by Visa & Western Union Partnership 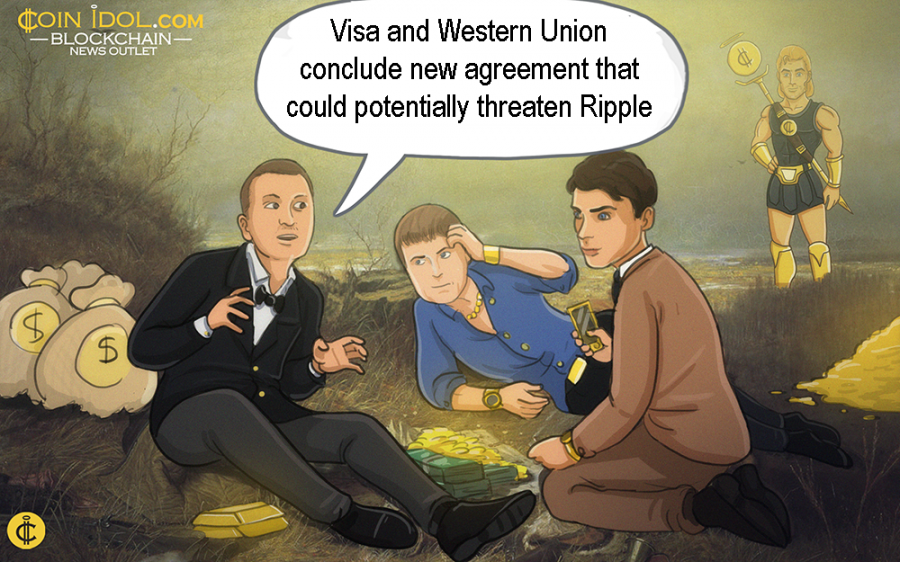 Visa and Western Union have concluded a new agreement that will bring the fintech, digital currency and blockchain industry to the mainstream. However, one of Top-3 coins, Ripple, could potentially suffer from this.

The New York Stock Exchange (NYSE) declared an agreement by two bulls in the payment processing sector. And this collaboration means that Western Union will have to apply Visa’s real-time one push payment system called “Visa Direct,” that will help introduce in speed and accuracy to payment processing. The effort by these payment giants could threaten XRP in one way or another.

Visa has been trying to improve its cross-border payment processing, so establishing Visa Direct in its financial system, will help Western Union to give clients a swift payment service onto cards, and further be in position to wire and receive money in a more transparent and quick way on this particular new payment platform.

The collaboration will also contribute to the growth of international payment processing, especially to most companies and customers operating or residing in over 200 nations and using more than 130 fiat currencies including dollars, shilling, pound, yen, and others, globally, and will further reinforce the value and experience of both parties (receivers & senders) internationally.

The technical teamwork of these payment service providers will play a role to leverage their widespread retail network to offer a topnotch payments system, that will allow clients transact money using a swift and user-friendly system in thousands and millions of monetary accounts universally.

Ripple is shaking because of the massive competition is facing from this collaboration. Ripple has also been providing swift international payment processing, but now that the main motive of this collaboration is exactly to do what Ripple is doing, leads a big fear to the company.

However, this is not the first time XRP is threatened. In February, JPM Coin came into existence and everyone in the cryptocurrency industry thought that Ripple was finished, but it still managed to thrive. At the time, a stablecoin JPM Coin was tried once in making transactions, but it was being hailed as a new Bitcoin and a liberator for virtual currencies, and from then it set Ripple’s significance in question.

The situation seems similar to what happened back in April, when JPM Coin was released. We’ve seen another bearish trend, when XRP dropped from $0.35 to $0.31 after the speculation that JPM Coin could really pose a threat to Ripple.

Last time, it turned out to be speculation, and XRP has further seen a spike to $0.47. In the nearest time we will see how the current situation plays out.