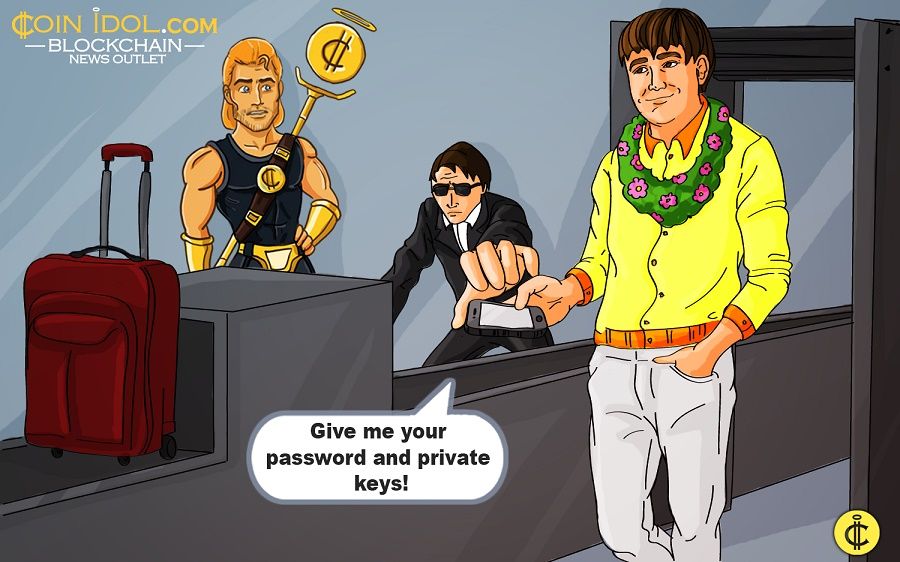 The New US administration under Donald Trump has raised the Border security at customs points when entering the US. Customs agents are searching mobile phones and other electronic devices using a complex algorithm to establish what Bitcoin or any other security info may be contained on the gadget.

The US Customs officials have hiked their game at border security by enforcing access to travellers’ mobile phones. A phone can be seized and analysed for any threat to national security for an amount of time before being given back to the rightful owner.

Bitcoin are stored in wallets that can be easily installed on user mobile phones or tablets. Bitcoins can later be exchanged for fiat or any local currency. This property makes Bitcoin a kind of concealed cash in cases where the amount of money one should carry is regulated.

Coinidol.com spoke to Alan Yong, the founder of Dnotes, a P2P digital currency, about the US policies on the amount of cash one can carry on hand at any given time. He replied saying,

“There is no limit to the amount of money you can bring into the US. However, if you enter with more than $10,000 in cash you must declare that at the customs checkpoint.”

Why the security agencies worry

Financing illegal activities and terrorism is one of the worries which the agents could have. Bitcoin provides an untraceable mechanism for moving around large sums of cash in a digital form. This could have prompted the new US administration to scrutinize travellers entering the United states with large deposits in their Bitcoin Wallets.

Coinidol.com spoke to Christopher Franko, founder of Expanse, a decentralized cryptographic information, application, and contract platform and a software engineer that works primarily with blockchain technology, about how he thinks Bitcoin is related to terrorism activities, especially those that can occur on US soil. He commented:

“Anything that has a perceived value and is transferable between one individual to another could be used to fund any activity ranging from innocuous to harmful. That includes bitcoin. Sure, bitcoin could be used to fund terrorism, but it's an imperfect medium for such a use case because every transaction is completely public and pseudo-anonymous at best, with state agents increasingly active and deanonymizing the transactions. With that being said, the pro's will forever outweigh the con's of bitcoin, so focusing on the pro's is leaps and bounds more productive of a conversation to have.”

Bitcoin security on mobile phones is via wallet private keys and passcodes. With advanced complex software used by the customs officials, all this information could be exposed. This means anyone with access to such information could remove or use funds in your wallet. Coinidol.com spoke to Rui Dong, fund analyst at D&D consulting and a developer with John Hancock Financial Services, on how wallet security works. He responded by saying:

“It depends what kind of wallet is it. At a high level, it is secured by me and only me having the knowledge of what the private key is. That could translate to having a paper wallet and knowing the private key for that. Or, it could be a computer based wallet, where I have the private key stored, maybe protected with a password.”