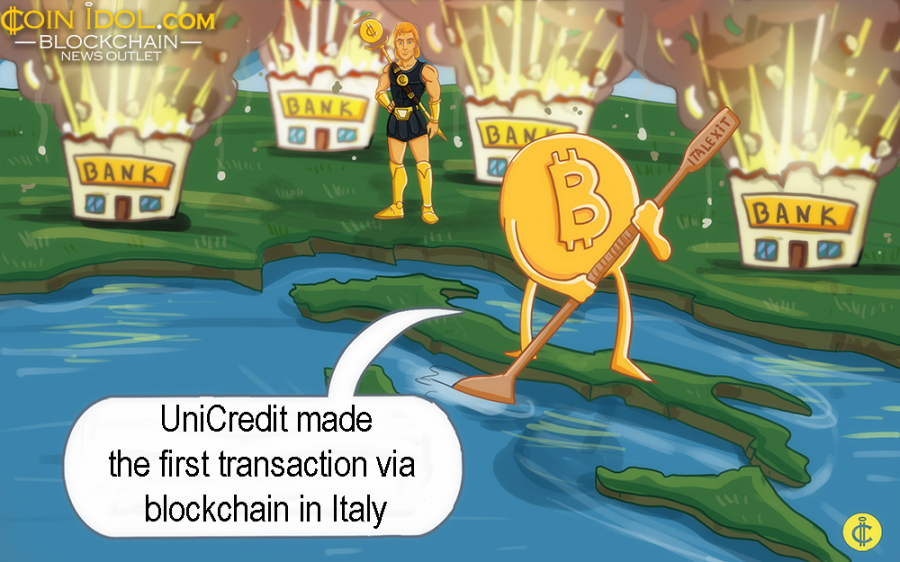 The blockchain technology has continued to be massively used in banking processes across the world. In Italy, UniCredit has finally made the first commercial transaction via the blockchain. Using the We.Trade platform, UniCredit has allowed the metal packaging manufacturer ASA Group to buy a tinplate game from its supplier, Steelforce, which was supported by KBC Bank based in Belgium.

"We Believe that over time the platform can help redefine trade relations between SMEs by removing the obstacles that typically make international transactions difficult and costly, with tangible benefits for our customers,” Luca Corsini, Head of Global Transaction Banking at UniCredit said.

Companies are Searching for the Best Production Technologies

By using a smart contract created via the platform, the payment will happen automatically, in relation to the timing agreed directly between the parties involved, both credited to the platform, once the purchaser has approved the receipt of the products. To the maximum advantage of the speed and transparency of the transaction.

Thus, with an effective digital process, the ASA Group found it easy to complete the operation in a few days, from the time of order to payment. Banks and big businesses are looking for a more efficient, effective and cost-effective way of managing cross-border business transactions.

Through the platform it is very possible for firms, businesses, institutions to access the monetary services made available to banks, like Bank Payment Undertaking (BPU), where the purchaser’s bank gives the seller a binding pledge to pay the Invoice, and BPU Financing, in which the banking institution finances the seller by allocation the BPU.

As Coinidol recently reported, Blockchain is expected to capture more than 10% of the world’s gross domestic product, according to the Cisco report. The technology will improve the internet of things (IoT), smart cities as well as supply chain solutions.

“The true innovation of blockchain technology is its great potential to automate trust among the parties using it,” the report says.

The phenomenon paves the way for both the Italian and global cryptocurrency industries to flourish. Now that UniCredit has used Blockchain to do business, other giant companies, institutions, banks, and businesses in Italy are going to follow its footsteps. This will make the Italian economy gain traction since the transaction processes involved in the market will no longer be a big problem.

Tags
Blockchain Transaction Italy Platform Technology Banking Belgium Game Payment
Most Popular
May 01, 2021 at 12:54
News
Russia is Going to Establish a Special Department for Exploring Artificial Intelligence
May 01, 2021 at 11:58
News
Dogecoin Price Pushes To The Upside; Can Bulls Breach The $0.45 Resistance Zone?
May 01, 2021 at 10:10
News
VersoView: Building Brands and Communities with Unique Blockchain Publish, Engage and Reward AI Solution
May 01, 2021 at 09:16
News
Polkadot Resumes Fresh Uptrend, Targets Resistance at $48
Apr 30, 2021 at 14:28
News
Ethereum Faces Rejection At $2,800, Consolidates Above $2,700 Support
More