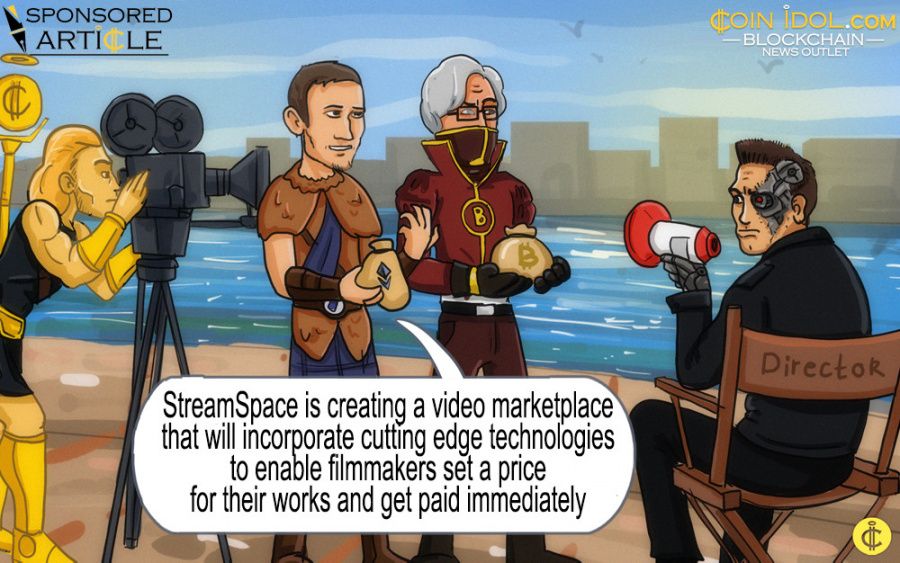 Blockchain is becoming an essential tool in the development and decentralization of the film industry. This technology offers both film creators and the viewers the opportunity to maximize their resources by reducing production and accessibility costs respectively.

From filmmakers to consumers

Texas based blockchain company, StreamSpace is creating a video marketplace that will incorporate cutting edge technologies like decentralized storage systems and blockchains to enable filmmakers set a price for their works and get paid immediately by consumers.

In essence, filmmakers are offered the opportunity to control their projects and achieve adequate compensation for their works since the system eliminates the need for middlemen in the form of major studios that have hitherto controlled a huge part of the industry.

This creation is aimed at introducing a novel distribution platform and an ecosystem community that will give consumers an opportunity to enjoy quality film content unavailable from conventional distribution channels, with a secure monetization engine that places more than 90% of payments directly into the hands of the filmmakers.

Furthermore, the company intends to launch a novel financing service that will help filmmakers raise the funds they need to create and produce film projects.

This is a development that will not only increase accessibility between both ends, but also improve on several other factors such as cost effectiveness, security of products, global outreach, monitoring of viewership among other benefits.

Evolving into the future

The film industry has undergone a lot of changes and restructuring over several decades. From the number of films released to the amount of capital introduced into the industry, it is very significant how the industry has grown since the early 1900s to date.

A prominent aspect of the industry that has been rarely disrupted so far is the activities of intermediaries. These usually operate in the form of major studios that control multi channel distribution, from theaters to broadcast / cable television to DVD and digital distribution, serving as the link between the filmmakers and their audiences.

In the early years of the film industry, it would be easy for these studios to handle the number of film productions coming in, thereby satisfying both the film producers and the motivated viewers. However, with the level of growth presently, it has become very clear that the industry’s capacity is evidently beyond the control of just a few central authorities.

This development creates the need for innovations within the industry that would enable a robust system where both filmmakers and consumers can achieve a satisfying symbiotic relationship.

“We will be designing and testing digital wallets for “tokens” that will show stored value in either local currency or in tokens, with links to the major trading exchanges where consumers can add more funds or where the filmmakers can redeem tokens for currency”

This is an innovation that is expected to unveil a transparent and crowdfunding platform that filmmakers can employ in raising funds for their projects while consumers are open to investing into such projects for future benefits.

It is also expected that filmmakers and independent film enthusiasts will find this offering as an opportunity to maximize the financial rewards possible by controlling their projects from creation through to mass digital distribution.

An era of significant growth

Much of the growth experienced in the entertainment industry can be linked to internationalization, with Bollywood (India) and Nollywood (Nigeria) becoming significant film production centers in the past decade. However, the most important underlying factor in this growth is the pace of technological development of lower cost cameras and production and editing equipment, enabling thousands of artists to create films for a fraction of the cost in the 20th century.

With such industrial growth and limited avenues of releasing these film products to the expectant audience, both filmmakers and motivated viewers are left unsatisfied. The limited avenues also leaves room for fierce competition, opening up the opportunity for the studios and film marketers to take advantage of the filmmakers who may want to get their works out by all means, leaving them at the risk of being shortchanged.

Taking advantage of the blockchain

One of the major characteristics of the decentralized technology is the promise of retrieving absolute control from specific groups and empowering individuals within their respective technological communities. In essence, content creators on the blockchain become largely responsible for their products both in terms of delivery and rewards.

Other benefits that this development aims to bring into the industry include:

●     Secure storage method of the video content, based in part on Protocol Labs’ IPFS and Storj
●     Blockchain transaction ledger for enhanced transparency and security.
●     Front-end decoder and embedded HTML5 player optimized for video streaming,
●     Content recommendation engine that helps consumers discover new content that fits their tastes, based on viewing habits and reviews / ratings
●     Secure digital wallet so consumers and filmmakers can manage their accounts and stored assets with confidence.
●     Private token exchange that monitors the market value of SSC and SSH tokens, enables the financial transactions between consumers and filmmakers
●     Community-focused front end for filmmakers to upload their products to the blockchain environment, set prices, and analyze statistics about the popularity or reviews of their content
●     Social media channels that link filmmakers to each other and to their audiences.
●     Initial Coin Offering / Token crowdfunding campaigns for new film projects on behalf of filmmakers that are interested in this uncommon technique for raising the funds necessary for a small or mid-budget film project.

The blockchain in its full expression appears to be a tool that will change the way technology is perceived and handled. Still in its very early stages of development, the impact of the disruptive technology is already being felt across several fields of endeavour.

Apparently, the entertainment industry is not left out in this move of technological revolution.