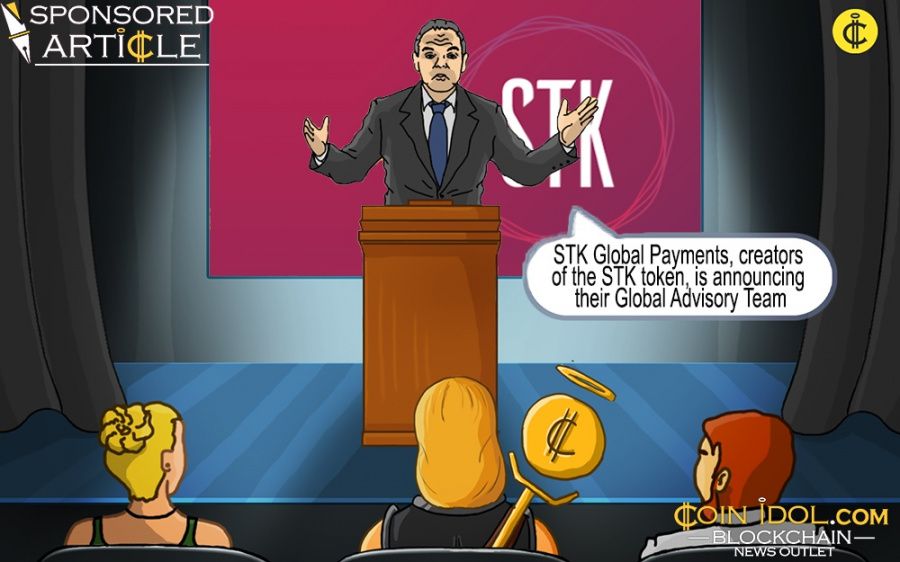 STK Global Payments, creators of the STK token, is announcing their Global Advisory Team, four weeks ahead of its public Token Generation Event beginning on November 13, 2017.

STK Global Payments, creators of the STK token, is announcing their Global Advisory Board, four weeks ahead of its public Token Generation Event beginning on November 13, 2017.

Built on the Ethereum blockchain as an ERC20 token, the STK token will enable users to transact with cryptocurrency in global markets and at brick-and-mortar stores in real-time. “STK will bridge the gap between the 22 trillion dollar marketplace and one of the fastest growing currencies in the world,” said Miro Pavletic, co-founder and Director of STK Global Payments. “We’ve simplified the blockchain process so that you can use cryptocurrency as easily as you would a debit card or cash.”

STK’s Global Advisory Board has decades of combined strategic experience spanning multiple industries, including finance, technology, political science and regulatory affairs. The Board includes a founding member of Ethereum, a Stanford University Visiting Fulbright Scholar, an award-winning publisher and entrepreneur and a Blockchain Specialist with multiple successful exits.

“This is an incredibly distinguished group of industry leaders, with a wealth of both practical and strategic experience,” said Pavletic. “We’re fortunate to benefit from their thought leadership as we move into the development and implementation phase ahead.”

Co-Founder of Ledger Labs, and a founding team member of Ethereum

Ethan Wilding is the former Chair of the Certified Bitcoin Professional exam, one of the first not-for-profit programs to establish a standard body of knowledge in the field of blockchain technologies. Ethan earned a Ph.D. in Philosophy from the University of Waterloo and taught at the Balsillie School of International Affairs. He is globally recognized for his role as a founding team member of Ethereum.

“STK aims to break down the cryptocurrency usability barrier and make crypto as familiar to use as traditional payments, all with no fees and no confirmation delays. To do this they are leading the way by implementing a cutting-edge Ethereum blockchain technique called State Channels; this technique will be become the standard for many types of cryptocurrency payments.” -- Ethan Wilding

Professor David LEE Kuo Chuen is the founder of several companies including California-based Left Coast and Singapore’s Ferrell Group. He is an investor in several successful Blockchain companies including Qtum and TenX. David has held several esteemed positions in the financial industry, including Director of the Sim Kee Boon Institute for Financial Economics at Singapore Management University and Group Managing Director of OUE and Auric Pacific. He graduated with BSc, MSc and PhD from the London School of Economics and Political Science.

“One of the areas of financial services and financial technology that I’m most passionate about is the idea of financial inclusion. People around the world face many barriers when it comes to accessing, spending or saving their money. A universally accessible solution like the STK token, that provides advanced financial services to people regardless of country or currency is something I am excited to be a part of.” -- David LEE Kuo Chuen

"I like to support a solid project with a solid team. I got involved with STK because the team was very strong. When you couple that with a brilliant product you get a winner. I’ll use the solution myself, so I’m confident there is a market for their mobile-first, crypto-friendly solution. And, they’re fellow Canadians, which added to my decision." -- Richard Kastelein

Chami Akmeemana has had four successful venture exits in the last decade, and currently advises a select roster of Blockchain companies. Chami was the Director of regulatory and government affairs at ConsenSys Inc, Fintech Advisor to the Ontario Securities Commission and Managing Director, Fintech and Blockchain at the Global Risk Institute. Chami is also the Chairman of the Blockchain Association of Australia.

“This is a true game changer for the financial payments and retail sectors. “The STK token represents a significant stride in the journey to achieve real time settlement of cryptocurrencies in all forms of mainstream financial transactions, in large part leveraging State Channels, which is one of the latest updates to the Ethereum Blockchain.” -- Chami Akmeemana