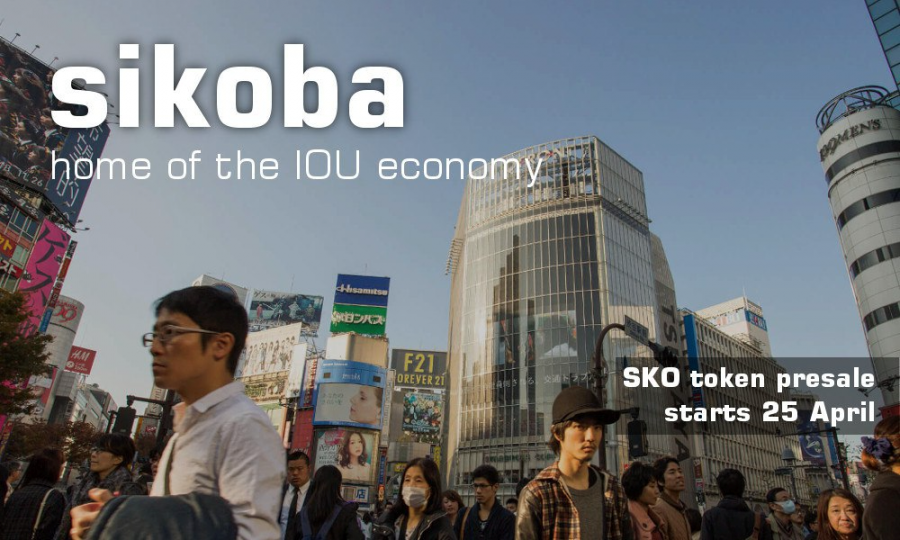 April 25, 2017, London, UK –  Sikoba, a global decentralized money platform based on peer-to-peer IOUs and blockchain technology is taking the first step towards its upcoming ICO by launching a  token presale. The presale will give participants a chance to receive a 50% bonus on SKO tokens. These tokens are designed to be used for making transactions on the Sikoba platform. The ICO will run from April 25 to May 15, 2017.

Sikoba is a decentralized money platform based on P2P IOU’s and built on blockchain technology. The service will allow users, who know and trust each other in real life, to mutually offer lines of credit, within the Sikoba system. The blockchain-backed, P2P, IOU-based system will be made possible through smart contracts, giving users the freedom to pay each other with both cryptocurrencies and fiat currency.

Sikoba’s P2P credit relationships are governed by smart contracts with specific conditions, fee structures, and repayment rules. Through the use of ‘credit conversion’, payments between participants who either do not know or do not trust each other are made possible. Fiat currencies or cryptocurrencies can act as a medium of exchange when there are no credit links between participants, or to repay outstanding balances when needed.

Sikoba CEO Aleksander Kampa stated in a recent interview that the platform is designed as a decentralized system, with the goal of eventually becoming independent and self-organizing, through the aid of blockchain technology. The Sikoba Blockchain makes use of a ‘Federated Blockchain’ design.

“This is a permissioned mining model where only authorized nodes add blocks to the blockchain.”

Kampa states his mission for the company,

“Sikoba is the result of my life-long interest in monetary theory. We see a future where the money will once again be diverse, with many different issuers, with a variety of credit relationships, where people will take an active interest in the type of money they wish to use. Our aim is to provide the tools to achieve that vision.”

This unique federation will be self-governing, which means that participants will be removed from or added to the federation based on the voting majority of its members themselves. Kampa stated that Sikoba would likely use Ethereum as a notary, but would perform its main operations on another blockchain, which will be chosen or designed based on the criteria of speed, flexibility and scalability. Differentiating  Sikoba P2P IOU platform from other P2P lending platforms, he said,

“Sikoba is not a peer-to-peer lending platform; it is a peer-to-peer IOU platform which allows payments to be made without having money (whether fiat, crypto or any other asset) to begin with.”

Sikoba currently operates as a small team of 3, plus several supporting members. At present Sikoba IOU platform is at the conceptual stage with technical elements still in the works. The SKO token ICO presale funds will be used to expand the Sikoba team, finalize a detailed white paper and develop an MVP by the end of 2017.

There are thousands of cryptocurrencies that act as a transfer or store of value, but in all cases, the acting participants must already possess the currency’s value to make an exchange. The Sikoba ecosystem offers a fully functioning virtual credit, or IOU system, that offers users the ability to attain accredited value, borrowed from another participant, without releasing any funds. Where Bitcoin aims to act as a form of digital money, SKO tokens serve as a kind of digital credit and ultimately have the potential to become a major aspect of the  future credit system.

The  Sikoba presale tokens are scheduled for release by the end of June 2017. Participants will receive usable SKO tokens after the platform’s launch, expected in Q3, 2018. The pre-allocation phase has begun on 17 March 2017, and the public presale will start on 25 April. Following the presale, Sikoba presale tokens will be issued on the Ethereum blockchain. They will later become exchangeable into SKO tokens, which will be used to pay for transaction fees on the Sikoba network.

Sikoba Ltd is an active blockchain company incorporated on 18 July 2016 with the company’s registered office located in Greater London. It is led by CEO Aleksander Kampa, whose lifelong interest in monetary theory has led him to build the company to achieve his vision.

Sikoba is the source of this content.   This press release is for informational purposes only and should not be viewed as an endorsement by CoinIdol. We take no responsibility and give no guarantees, warranties or representations, implied or otherwise, for the content or accuracy.  Readers should do their own research before investing funds in any company.