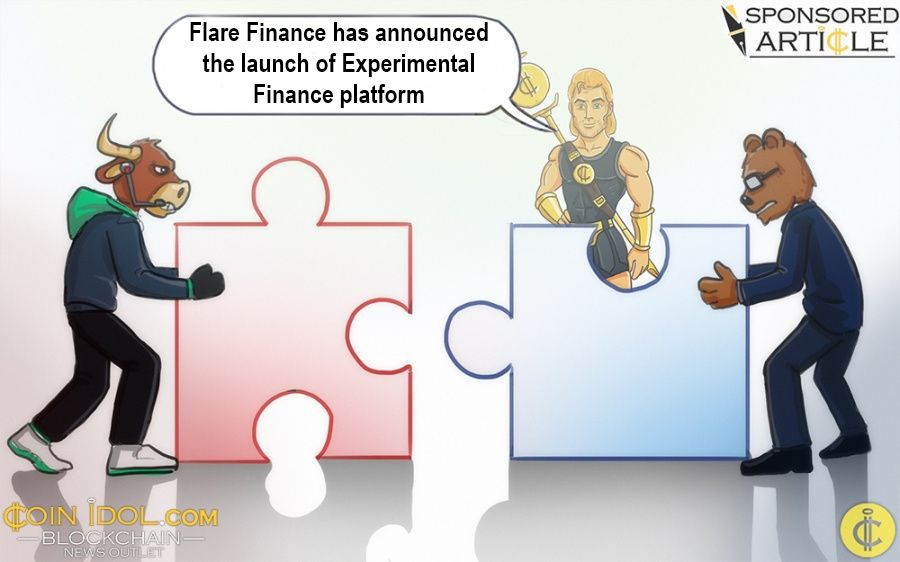 The DeFi space is evolving rapidly and both existing, as well as upcoming players, need to continuously innovate to survive. Flare Finance, the first DeFi platform on the Flare Network might have gained a unique competitive advantage with its latest announcement.

Following the footsteps of the Main Network, Flare Finance has announced the launch of Experimental Finance ( ExFi) platform to empower developers to build, deploy, and test modules on the network. Developers will be able to get reviews, feedback, and test their products before being considered for addition on the Flare Finance platform. However, Flare Finance has clarified that not all products on the Songbird Network will make it to the Main Network. The test network utility token of the Songbird Network would be $SGB with a fixed supply at launch and 10% inflation per annum.

Once the Songbird Network is launched, Flare Finance will launch the ExFi platform with three products – FlareX, FlareLoans, and FlareFarm. Users who receive the $SGB airdrop or have acquired $SGB will be able to use FlareLoans to create Canary Dollar ($CAND). This would be similar to creating Yield Dollar ($YUSD) on the Main Network. $SGB could also be swapped against $CAND using FlareX. Holders of $SGB and $CAND will be able to participate in staking on FlareFarm to earn rewards.

Flare Finance is expected to launch on the Flare Network with a total of six products. However, FlareMine, FlareWrap, and FlareMutual will not be part of ExFi and will directly be launched on the Main Network. YFIN Farming, Governance, YFLR Distribution, and APY Cloud will also be released directly on the Main Network. This move is aimed at accommodating any changes required before the launch of the main network.

Rewards for participating on ExFi Platform

The aim behind the launch of the ExFi platform seems to be to test all the products in every possible way before they make it to the Main Network. To ensure maximum participation, Flare Finance has announced a 1 million $YFLR reward. 650,000 $DFLR will be allocated to yield farming participants who stake in DFLR, SGB, and SGB/CAND farming pools. 350,000 $DFLR rewards will go to users who mint Canary Dollar and participate in the stabilization pools on the FlareLoans. The distribution of rewards will take place over 63 days to ensure consistent testing.

Once the Main Network is launched, participants who have been rewarded with $DFLR will have to migrate it to the Flare Network and receive the $YFLR tokens. All users who receive $DFLR, whether as a reward and/or airdrop against their Flare tokens, will have to convert it to $YFLR tokens. The swap from Songbird $DFLR to Flare $DFLR will be an easy process via a 1-click swap portal which would be available upon MainNet release. The reward will lead to a slight increase in the supply of $YFLR tokens. The supply of $YFLR tokens at the time of launch will be 42 million.

Governance will begin only after both the Main Network and Experimental Network are live. A month after the launch of Flare Network, a dual snapshot will take place. Holders of $FLR will receive $DFLR, whereas the holder of $SGB will receive the ExFi token, $SFLR. Holders of $SFLR will be able to mine $SFIN on the ExFi platform. $SFLR and $SFIN will have the same functionalities as $YFLR and $YFIN but on the ExFi platform. It will act as the governing body over new modules to be added to the ExFi ecosystem. Flare Finance seems to be working towards making ExFi into a financial suite with products built by community developers and open-source contributors.

Flare Network with the launch of Songbird Network and Flare Finance with Experimental Finance (ExFi) platform are bringing higher safety standards to the DeFi space. The launch of an ExFi platform by Flare Finance will ensure that only the battle-tested products reach the Main Network. All the risks associated with a new platform such as bugs, hacks, etc. will be eliminated at the Experimental Finance stage. This will ensure that users on the main platform will be using fully tested products. The Flare Finance team seems to be working towards delivering a robust and feature-rich platform. The ExFi platform could only be the beginning!