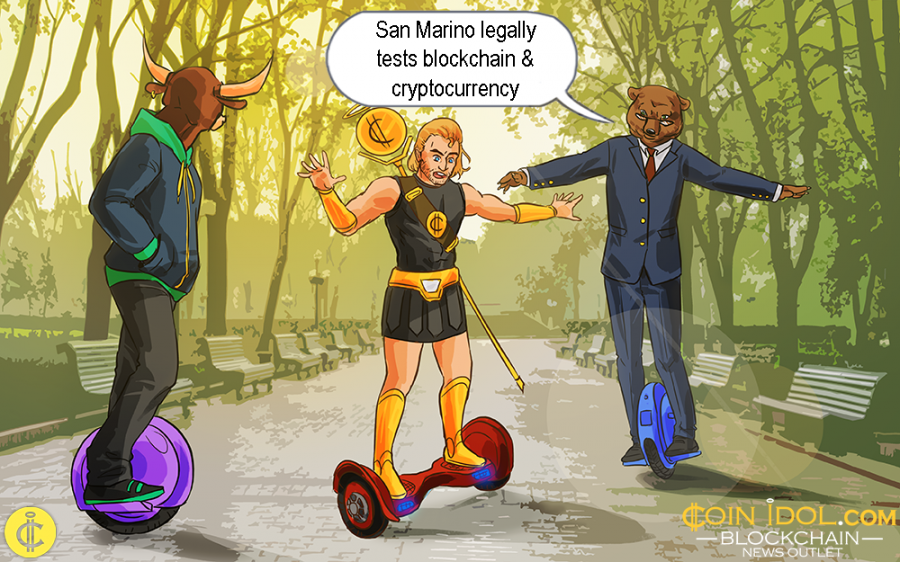 San Marino, a country in Europe, located within the borders of Italy, issued the Delegated Decree n.37, dubbed "Rules on blockchain technology for businesses." The standard, inter alia, makes an interesting reconstruction of the marvel of cryptocurrencies, which are notably classified as utility (usage) tokens and investment (security) tokens.

Italy is among the big countries which are slow in collecting social and technological amendments in their laws. Possibly there are some problems to solve so as to be able to regulate changes that still effect small number of the population and Gross Domestic Product (GDP). But this appears not to be the case with many small autonomous countries that have well-run administrations.

Some of these countries include Malta, Singapore, Switzerland and Luxembourg, that are in most cases the first to regulate the laws. On February 27, it was the opportunity of San Marino, which established a Delegated Decree, the equivalent of the Italian law decree, to prescribe the rules of Token emission on Blockchain technology and their marketing.

According to authoritative policy, albeit, digital asset tokens, although falling within the category of the financial product, would be more properly a financial instrument and, so, would apply not only the Prospectus Directive but also and above all a different discipline, Directive 2014/65 / EU (after this "MiFID II").

Blockchain is a revolutionary technology which enables users to store blocks of data in an unalterable chain. This makes it difficult to alter the written information and the writing order. Practically, this allows users to store and exchange money minus the need of financial institutions, vend or purchase a house without a notary, validate that a financial promoter is actually registered without having to trust sightlessly.

With Blockchain, it is possible to issue digital. There are various types of tokens, in particular those of payment like Bitcoin, Ethereum, Ripple, EOS and other major cryptocurrencies, but these tokens are not yet attended to by the legislature of San Marino.

Now, though, the state of San Marino has not formally applied the MIFID II Regulation, although in the European Union (EU) decision 2018/492 of the commission of 22/03/2018, that adapts the annex of the monetary agreement between the EU and the Republic of San Marino, it is well-known that the introduction of such legislation should be provided in the shadow of the Titan on December 31, 2020 (together with the Markets in financial instruments regulation (MiFIR): Regulation 600/2014) and December 31, 2021 , the latter with regard to Directive (EU) 2016/1034 of the European Parliament and of the Council of 23 June 2016, that rectifies the Directive 2014/65/ EU on the markets for financial instruments.

This Decree of the Security and Utility Token law issued on Blockchain technology and standard all the rules of emissions and principally the marketing of these Tokens. A firm from any country in the world, that follows rules of transparency and legality written in the law itself, will be in position to issue to San Marino the both security and utility tokens recognized by the government and sell them in any part of the world with an initial coin offering (ICO), though this is done in line with the law itself. Above all, the sale can only be to individuals, businesses or companies which consecutively follow rules of transparency and legality - especially against money laundering or obscurity.

Tax Exemptions on Blockchain and Crypto

The Blockchain decree of San Marino does not stop only on defining the tokens and the ICOs, but it goes further to provide a strong lever of success to the operations which will be done based in the Republic: all revenues from activities done with the cryptocurrencies will be immune and exempt when the money remains in Italy, but it will be taxed only when it leaves the territory.

It would have been wise and essential to wait in order to avoid unfriendly surprises, the formal transposition of this norm within the law of the oldest Republic in the world, especially if the European Commission were to follow the recommendations of the Initiative Report on ICOs and cryptocurrencies, which the Securities and Markets Stakeholder Group, or the European Securities and Markets Authority (ESMA), published on October 19, 2019.

All the characters have recapped that this Decree is just the beginning and the launch of a regulation on the Blockchain technology and its applications which will be progressively augmented to make the Republic a comprehensive global hub for this nascent innovative technology.

Italy is Implementing the Law

Particularly, with this text, the SMSG reiterates the priority of protecting investors and advises ESMA, inviting it to solicit the European Commission so that cryptoassets as investments are included at the earliest possible time in the definition of instruments. Financial plans visualized by MiFID II, with the effect of extending the application field of the relevant European discipline to the Exchange which enables their sale in the secondary market.

For Italy and for any regulations and offers to the blockchain and cryptocurrency community the problem does not emerge, whatever the nature of the investment tokens (and the nature of numerous clauses of financial instruments) and the discipline related with them.

In actual fact, as a full member of the European Union, Italy has implemented the legislative decree of August 3, 2017, n.129, the execution rules of MIFID II, which, together with MiFIR, have substituted the preceding European regulations, in addition to clearly having implemented the Prospectus Directive for so long.