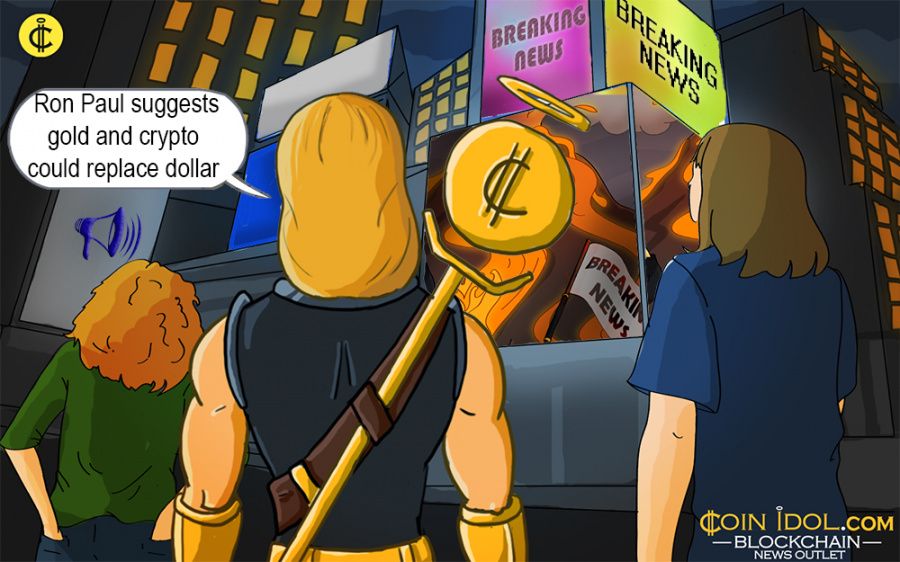 Ron Paul, the former US presidential candidate, is considering with continued attention the potential hope that a combination of cryptocurrencies and gold could ultimately substitute the U.S. dollar sooner or later.

The increasing economic war and world financial disorder are driving the world economy onto a deadly course of development, which has resulted in calling for possible reforms for the monetary system.

Paul contested for the U.S. president in 1988, came as a flag bearer of the Libertarian party. He also served in the U.S. Congress for some good terms from 1976 to 2013.

He was an eminent member of the House Banking Committee especially when he was still serving in Congress. He very much censured the Federal Reserve Bank of being the cause of inflation and also upbraided the banking incompetence for the savings and loan crisis that happened in the 1980s and 1990s.

He has currently warned that a global monetary crisis is inevitable and that we are already in a deadly economic situation. He said:

"This is why the call for monetary reform is getting louder. These dangers prompt a growing number of people to plan for an alternative monetary system. This is good news."

Paul greatly admits that the plan to substitute fiat currencies is already in the process. He said:

"There are several major efforts being made to replace the fiat dollar with gold or cryptocurrencies, while other countries are making plans to challenge the dollars as the world's reserve currency."

Paul has continuously been advising people to willingly invest in bitcoin-based retirement accounts like CoinIRAS. Rand Paul, a Senator and a son to Paul, also accepted contributions from his supporters during presidential campaigns when he was running for the US presidency.

Is the Competition on Dollar Illegal or Legal

Paul properly highlighted out the great defects that are highly affecting the current economic model such as government corruption and poor foreign policy. He pointed out all these in his paper dubbed "The Dollar Dilemma: Where to From Here?", Paul wrote:

"It's a fallacy to believe the U.S has a free market economy. The economy is run by a conglomerate of individuals and special interests, in and out of government,  including the Deep State, which controls central economic planning."

However, Paul strongly proposes that competition with the dollar should be declared legal, and also alludes to a new financial model that fuses cryptocurrencies and gold using advanced blockchain technology.