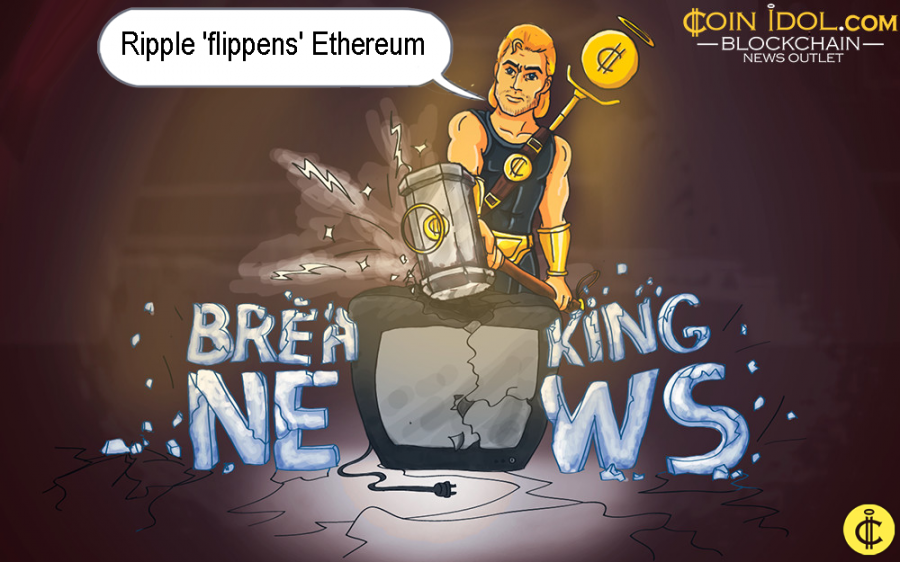 A 'Flippening' has arrived once more in the digital currency markets, but much to the vexation of Ethereum (ETH) investors - this isn't the one that has been long expected by Ethereum holders.

Compressed by a decorously-parabolic rally not experienced since January this year, Ripple (XRP) has succeeded in surpassing ETH as the second-biggest digital currency by market cap.

From CoinMarketCap, Ripple now has a total valuation of $23.9 billion, positioning it over $400 million ahead of ETH. The XRP price has increased an astonishing 64% in the past two days, glueing a 7-day long rally of over 113%.

Currently, there is no obvious cause for the Ripple price rally, other than the San Francisco-based Blockchain technology startup recent proclamation that Ripple-based commercial Blockchain tech applications will go live "in the coming month or beyond."

Talking about Ripple's recent rally, an expert analyst at eToro, Matthew Newton, told Coinidol that "the stars appear to have aligned" for the coin.

“Despite being one the most polarizing cryptos of them all, eToro customers can’t get enough of XRP at the moment; it has more exposure than any other asset on our platform. As we’ve seen in the past, the price tends to move in short, sharp bursts, picking up a lot of momentum when the hype builds. It remains to be seen how much further it could go.”

Ed Cooper, head of mobile at Revolut, a Cryptocurrency-friendly FinTech firm, revealed that it "remains to be observed" whether or not the rally will hold.

“The high transaction values, coupled with market sentiment following the announcement on Monday could indeed be the reason why XRP reached new highs, having gained nearly 50% in the last 24 hours. While this is great news for many crypto enthusiasts and especially for XRP fans, it remains to be seen if the bullish trend will prevail, given the current market conditions that have seen nearly all cryptocurrency losing around a great deal of their value since the beginning of the year.”

Ripple briefly exceeded ETH's market cap in December last year and early in January this year, when investor insanity and the "Kimchi Premium" sent its price as high as $3.84 and made XRP the first digital currency after BTC to accomplish a $100 billion market cap. However, ETH eventually regained the silver podium, a clear position it has been holding throughout this year - up to now.

Tags
Ethereum Ripple Cryptocurrency Digital currency Market Cap Price Market
Most Popular
Apr 12, 2021 at 13:04
News
Ripple Is a Step Away From Outperforming Binance Coin by Market Cap
Apr 12, 2021 at 12:11
News
Ethereum Slumps Below $2,150, Unable To Sustain Above $2,200 Resistance Level
Apr 12, 2021 at 10:38
News
Bitcoin Breaks above $60,000 Support, Struggles to Resume Upside Momentum
Apr 12, 2021 at 08:15
PR
MyCryptoParadise Opens the Door to Trading Like a Professional With the Best Crypto Signals Being Offered Today
Apr 11, 2021 at 11:11
News
Female President of Tanzania Expected to Mitigate the Climate for Cryptocurrency in the Country
More