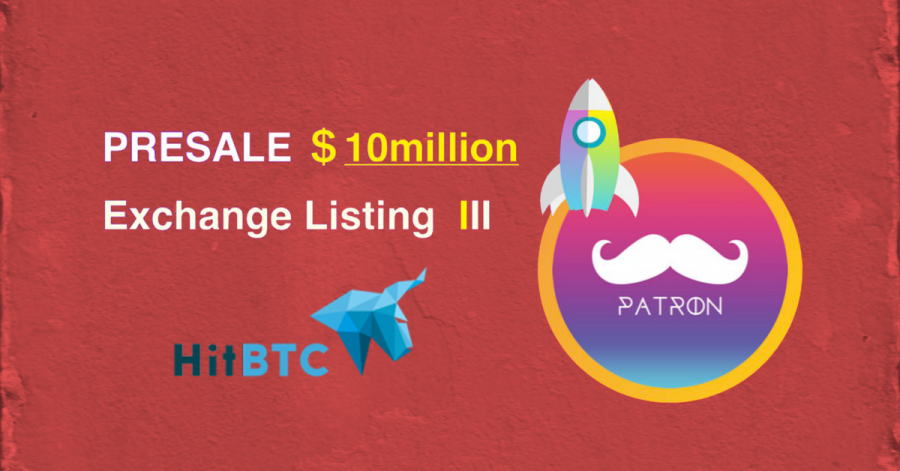 Patron’s Japanese team is building the first influencer Blockchain platform. As one of the most successful projects out of Japan, Patron has gained an international community of fans and followers that support its vision to create a global marketplace for influencers.

February 14, 2018. Tokyo, Japan: Patron, a Japan-based Blockchain platform for influencer marketing, will officially launch its pre-TGE on February 14, 2018 after successfully raising $10 million (USD) in its private round. The pre-TGE will include a 50% bonus on all contributions and will run through February 28, 2018. The pre-TGE will be capped at $20 million and lead into a public TGE on March 1, 2018.

As one of the most successful projects out of Japan, Patron has gained an international community of fans and followers that support its vision to create a global marketplace for influencers.

By using Blockchain technology, Patron will connect brands with influencers, in a safe, secure, and fair mobile platform. Currently, influencers, especially local ones, are at a disadvantage with both sponsor negotiations and being discovered in the first place. Despite the accessibility of social media platforms, usually only the top influencers are found and hired for paid projects.

Patron will solve this through both experience and technology. CEO and Founder Atsushi Hisatsumi explains:

“Influencers have the power to change the world through creativity, art, and expression. The brand has noticed this and are increasingly adding influencer budgets into their marketing campaigns. This has created a situation of supply and demand global market that is currently fragmented. We want to bring all of these actions under the Patron platform and make the process fair, transparent, and secure.”

Patron has recently made headlines with major announcements including:

1. Exchange Listing: It is confirmed that HitBTC will be the first exchange to list Patron tokens following the TGE. This will provide immediate liquidity for the tokens and create a marketplace for trading.

2. Road Tour: The Patron team will be heading to the United States to be interviewed by Small Cap Nation and Nasdaq in Times Square. The team will also meet with investors and family offices in both New York City and Silicon Valley.

3. Advisors: Patron’s advisory board has included the additions of Keith Teare (former TechCrunch co-founder) and David Cohen (advisor at Hashgraph).

Patron is a global Blockchain project looking to capitalize on the global influencer marketing industry. Built by local influencers in Japan, the Patron platform will offer a clean and transparent solution to both finding and booking influencer talent around the world.