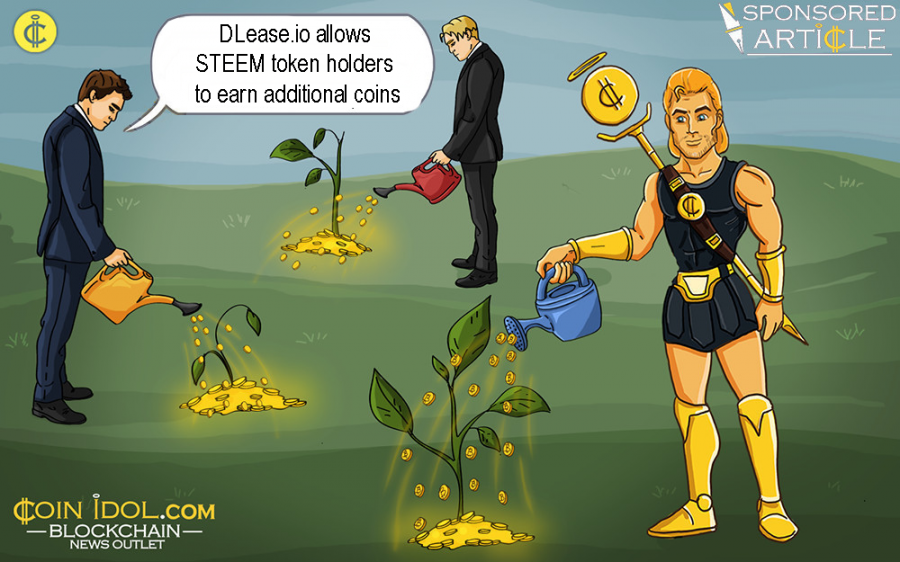 Crypto "hodlers" just received a way to earn passive income from their cryptocurrency stakeholdings. DLease.io, a new Steem-based application, recently launched its professional-grade leasing platform, which allows STEEM token holders to earn additional coins through its peer-2-peer leasing program. With an average Annual Percentage Rate of double digits for the past 12 months in its closed community beta, the DLease app offers passive returns not common to the cryptocurrency industry.

Influence on the Steem blockchain is directly related to the stake one has, also known as STEEM Power! The more stake, "STEEM Power" one has, the bigger the dollar value of your upvotes.   DLease seeks to assist users who are lacking in stake-weighted social influence, by offering them the ability to lease delegated STEEM Power at a fraction of the cost of owning the asset itself.

Once the lease delegation is received, the user instantly operates with a higher virtual stake, providing larger payouts on his or her activity.  Higher STEEM Power allows one to post, comment and upvote with greater frequency and upvote potency. Leasing delegated STEEM Power provides the ability for smaller accounts to operate in the same fashion as their larger peers and also benefit from greater resource utility such as the ability to claim free Steem accounts to give out to others, or the ability to send bulk onchain memos, otherwise not possible as a small stakeholder.

STEEM Power stakeholders are put in the unique position of being able to generate a passive income without the downside risk. Leasing digital assets is a frictionless process, with returns currently outpacing those of leasing real estate, without the associated hassles and costs.

In the property leasing sector, landlords needs to pay land taxes, insurance, and maintenance on top of dealing with tenants, leasing managers, defaults, vacancies and evictions; all of those being among the many pitfalls to physical property leasing. Digital asset leasing all but eliminates most of these risks, with greater ease of administration and fractional asset ownership as standard benefits.

One of the drawbacks to centralized systems within the cryptocurrency industry, is the risk associated with giving up one's keys.  Numerous hacks of exchanges took place where a centralized entity was holding individuals' crypto along with their keys. This enabled hackers to enter the honeypot and clean out the accounts. On DLease, this is much less likely, as stakeholders retain their keys at all times, thus maintaining full control over their assets.

The downside risk of lessee default is simply not there, because delegation can be cancelled at any time and all leases are prepaid and released to the asset owner in daily payments until they have fulfilled the contract duration. Since the delegation increases the impact of all activity through having a bigger stake, the incentive for the lessee to make good on the agreement is immediate. Throughout the entire process, the stakeholder maintains control of the assets.

DLease is presently offering digital asset leasing opportunities on the Steem blockchain. This is going to expand as more tokens are added to the ecosystem through the Smart Media Token protocol. The SMT protocol is going to allow applications to create their own tokens on top of the Steem blockchain which will carry the same characteristics as the main Steem cryptocurrency. Therefore, individuals using those applications will have the same incentive, to increase their impact on the community. SMT created assets will have the same delegation characteristics and thus will provide further leasing scope.

Opportunities in cryptocurrency, for the most part, are limited to speculation. People buy different coins in hopes they will appreciate over time. There are very few programs that offer other avenues for return.  Dividends and passive income opportunities with double digital Annual Percentage Rates in the top 50 rated currencies are few and far between. Crypto can be used to buy into other projects or apps, but that requires time, attention, and a lot of risk assessment.

BuildTeam.io, the developers behind DLease.io; spent the last two years proving that peer-to-peer leasing is a valid approach and by leveraging Steem's chain-level delegation features, the DLease platform has been generating a consistent average APR of nearly 17% up until the time of writing, with individual lease APR bursts in the 20 and 30 percentile range.  We know that past performance is not a guarantee of future rates, but because of the way the Steem ecosystem works and the growth it is experiencing, this is a figure that could go up as more users and applications join the ecosystem, requiring leased resources to operate effectively.

Digital asset leasing provides a cost effective solution to purchasing utility, especially if we see another bull run forcing prices upwards; thereby pushing STEEM Power acquisition further out of reach, where only leasing will become feasible. In such a case, incumbent delegating stakeholders will benefit greatly from their passive earnings potential.

Tags
Cryptocurrency Risk Startup Leasing Steemit Income Community Token Platform Industry
Most Popular
Sep 21, 2021 at 13:11
News
The Chinese Digital Yuan Shows Success, but WeChat and Alipay Pose Threats
Sep 21, 2021 at 12:42
PR
How Africa Spearheads The Global Adoption Of Bitcoin And Cryptocurrencies
Sep 21, 2021 at 12:20
News
Litecoin Hovers Above $155 Support as Bulls and Bears Decide the Next Move
Sep 21, 2021 at 11:50
PR
Massive NFT and Token Giveaway From Polker as Staking is Announced!
Sep 21, 2021 at 11:30
News
Chief Designer Big Joe Releases His First NFT, Which Will Be Launched in Poly Xiamen Auction on September 22
More