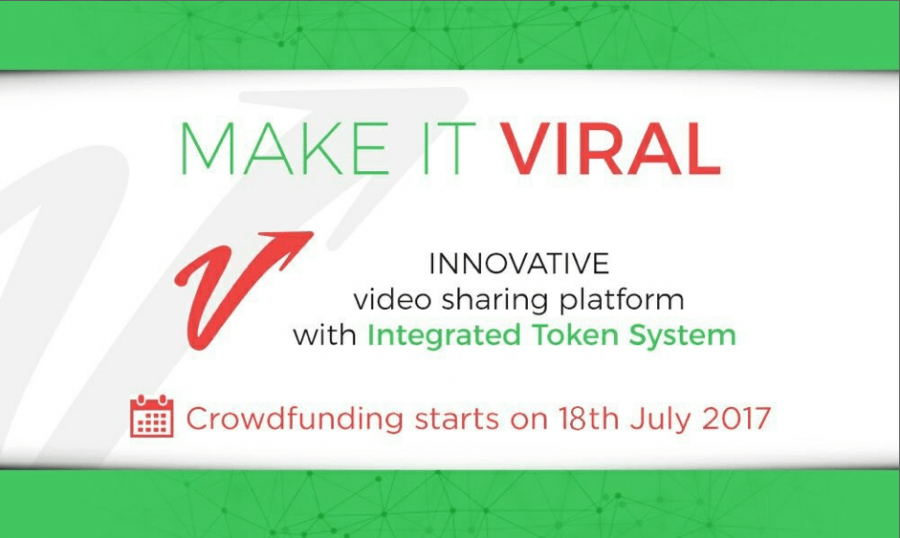 Cryptocurrency startup ‘Make It Viral (MIV)’ has announced the upcoming crowdsale for its blockchain based video sharing platform.

July 07, 2017, Turin, Italy – Italian blockchain video sharing platform ‘ Make It Viral’ has announced its crowdfunding campaign. The crowdfunding campaign will commence on the 18th of July 2017 and will give investors an opportunity to support the groundbreaking blockchain-based platform that supports streamlined video sharing and comes with an integrated token system.

Make It Viral is aiming to eliminate some of the lesser liked aspects present in current popular mainstream video sharing platforms such as Youtube and Twitch, whilst offering unique advantages to both users and uploaders on its platform. MIV is working on providing a unique video sharing platform experience, with the aid of blockchain technology.

The MIV video sharing platform targets a wider audience and not just those directly involved with cryptocurrency. Unlike mainstream platforms, MIV will have a very minimal number of banners and advertising. The platform will have an option to send micro-donations and contribute MIV to the makers of the viral video.

Uploaders will be safe from missing payments from ads affiliations and chargebacks from payments processors. They will also incur fewer fees than traditional video sharing platforms while being able to accept micro-donations. These factors will help uploaders to increase their fan base on the platform. MIV intends to install automatic exchangers with a gateway to convert MIV into fiat for the convenience of users and uploaders.

MIV enables uploaders to reach new users through the platform’s Integrated Ranking System. The platform aims to be as user-friendly as possible, and it has extended full app support for both iOS and Android.

MIV is the native token of the ‘Make It Viral’ video sharing platform and will be used by users to vote their favorite content and help them to get more visibility. The company has chosen to implement MIV as the means for exchange of value between viewers and uploaders on the platform. Users will be able to receive free MIV daily to help drive the ecosystem.

In addition, MIV will be soon available for trade on various exchanges and Make It Viral intend to later implement an exchange directly on the platform.

The total 50 Billion MIV tokens minted will be allocated as follows:

Until July 31, 2017, the price of 1 MIV will be 3 satoshis, In August, the MIV token price will increase to 4 satoshis and the to 5 satoshis throughout the month of September. In October, the MIV tokens will be sold at 6 satoshis/token.

Simone Di Francia, CEO & Founder
A medical student at Università di Torino, Simone has been involved and interested in Blockchain and Fintech since 2013. He has always been fascinated by Blockchain and its applications in everyday life, which led him to explore various use cases and eventually come up with Make It Viral.

Sara Di Francia, Legal
Sara graduated from Università di Torino, and she is a practicing lawyer in a law firm specialized in the company and commercial law. She has always been interested in informatics and computer law, and recently fascinated by Blockchain and its aspects.

Matteo Scivoli, Market Researcher
Matteo is an Engineering student at the Politecnico di Torino. He has an interest in studying niche markets, analyzing their data and their financial potential. Currently, he is putting his skills to use as a consultant with the MIV Team

Make It Viral is the source of this content. This press release is for informational purposes only and should not be viewed as an endorsement by CoinIdol. We take no responsibility and give no guarantees, warranties or representations, implied or otherwise, for the content or accuracy.  Readers should do their own research before investing funds in any company.