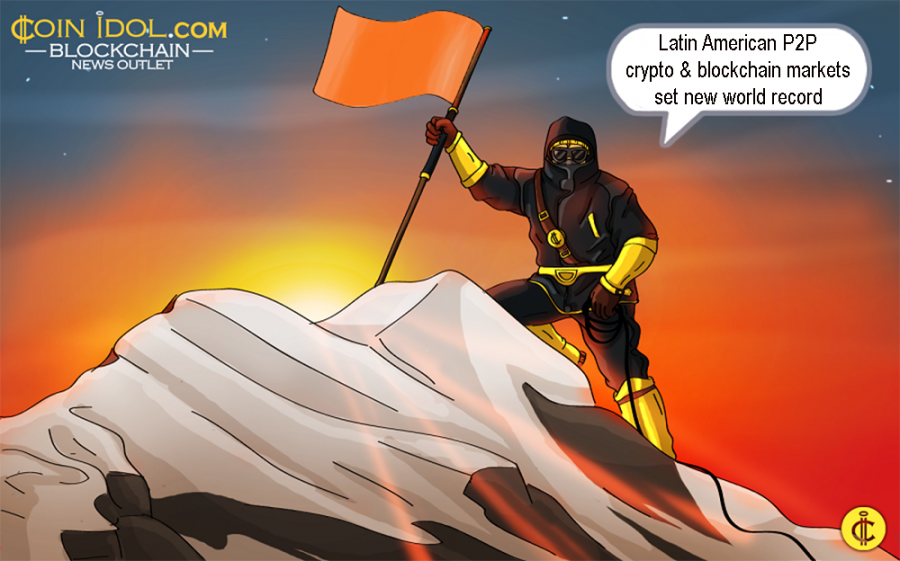 Digital currencies have gained much momentum globally, including in South America. The World Bank recently issued a report and indicated that only 49% of adults in S. America have access to banks. Overall, it is difficult to create a new bank account since it involves multiple processes (bureaucracy) and weighty maintenance costs.

Nevertheless, smartphone adoption continues increasing in S. American countries. This is one of the reasons why many individuals value more highly using cryptocurrencies like Bitcoin (BTC), DASH etc.

Latin American peer-to-peer (P2P) cryptoasset markets have registered major growth heading into 2019, with countries such as Colombia, Peru, and Venezuela posting record volumes on Localbitcoins markets when calculating in both Bitcoin and fiat. The markets in Argentina, Dominica and Mexico also showed record volume for P2P trade in the past few weeks, according to a report by Bitcoin.com.

For instance, in Venezuela, BTC and Dash users grow significantly day-in-day-out. Actually, the country has the most active Dash community across the globe.

Because of the economic hardship that Venezuela is facing, the citizens have decided to adopt cryptoassets. This has enabled them to transfer money sans having to trouble about the rampant hyperinflation or managing bulk sums of money in hard cash, that was virtually out of question.

According to Localbitcoins data, the number of BTC coins that were traded by users in Venezuela has been increasing with the passage of time. Last year, it recorded around 1,974 BTC transacted in just 7-days using Localbitcoins exchange platform.

In Brazil, however, the environment is totally different. As one of the giant economies on planet earth, Brazil plays a crucial part in the digital currency market in Latin America. There are very many crypto firms and retail stores which are allowing cryptoassets as a way of payment.

In Colombia, the crypto market is also flourishing and booming at a high rate. Since the country is a neighbour to Venezuela, thousands of refugees occupy Colombia hence influencing the cryptoasset landscape to gain momentum in Colombia.

For instance, according to CoinATMRadar, Colombia has around 27 BTC ATMs and the number of these machines is likely to multiply in the future.

In Peru also, there has been a growing application of cryptocurrencies, especially in the last few years. Despite Peru being crypto un-friendly country, some citizens continue creating various crypto platforms and services.

Bolivia has for a long time been limiting cryptoasset use within its borders. So, the Bolivian government disallows digital currencies including BTC. Bolivia is among the few nations under the sun, including Ecuador, where BTC is totally prohibited.

Chile and Argentina have occasionally been having essential cryptoasset events as well as meetings. In Chile, for example, LaBitConf has attracted thousands of users across the globe interested in cryptos and blockchain.

There are very many firms located in Córdoba and Buenos Aires providing blockchain and crypto-related services.

The Oriental Republic of Uruguay, which achieved independence from Brazil in 1825, doesn’t have as active an ecosystem as other nations. However, the government of Uruguay is ascertaining the possibility of rolling out a central bank digital currency (CBDC) which would help the nation navigate towards a cashless community.