IONChain- the Future of IoT, a Mining Tool for All Things

Cisco released a controversial study earlier this year. According to the report's forecasts, 75% of the world's existing networking projects will end in failure. Interestingly, however, almost at the same time, Alibaba's 12 scientists from different fields unanimously declared: as the maturity of AI technology accelerates, the Internet of Things (IoT) is going to have a truly popular year.

What does the concept of "Internet of Things", which is a little strange but frequently mentioned, mean? In what direction will IoT go in the future? Will IoT be a change maker in our lives like Internet? To what extent is the current technology of Internet of Things developed? What are the motivating forces of it?

Internet of Things, also known as IoT, as the name suggests, is a network that interconnects all objects. This sentence can be split into two meanings. The first meaning is the core and foundation of the IoT, the Internet. It is the network that extends and expands on the Internet; The second meaning is the extension and expansion of the client to any object, exchange of information and communication, that is, the interconnection among objects.

Although the concept of the Internet of Things is very abstract and difficult to understand, you must have seen a lot of things in the Hollywood sci-fi films where IoT is a applied to real life: A snap of fingers, the coffee machine will automatically make the early morning of the coffee; Before sitting in the intelligent vehicle, the automobile has already determined the best route and has already set the AC to the right temperature; On your way to home, the lights are on and your bathtub is filled with hot water. In fact, when IoT technologies mature, there will be many application scenarios including but not limited to agriculture, transport, healthcare, logistics, construction, security, and others.

Therefore, a large number of scientists, technical R&D teams, and even capital have high hopes for the "Internet of Things" and believe that the IoT can completely subvert the way we live and work like the Internet. At present, a large number of companies and project teams have begun competing to develop IoT technologies, hoping to take the lead in taking off the “pearl on the crown”: the traditional technology companies like IBM, PTC, GE, and Microsoft, have become dominant in the IoT platform market; The Chinese Internet giant BAT has also developed or laid out its own Internet of Things technology. However, outside these traditional enterprises, there is also an extraordinary force that is also impacting this huge blue ocean market--the blockchain project team.

As of May this year, there has been no less than ten kinds of blockchain crypotocurrency issuance under the concept of "Internet of Things", among which there are IOTA with the world's top ten market value, which focuses on solving the problem of transactions between machines (m2m); The SDA that implements the seamless integration of the bottom layer of the blockchain and the application of the Internet of Things; The WTC that builds a trustworthy, authentic, and reliable underlying commercial public chain by Internet of Things technology.

There is a natural fit between the concept of blockchain and the Internet of Things. Blockchain emphasizes "decentralized point-to-point connections," while the Internet of Things emphasizes "the direct connection between objects and things." Therefore, although these emerging forces may not have as many traditional IoT companies as their capital strength, R&D experience, etc., the blockchain team has a unique advantage in overcoming problems of IoT. 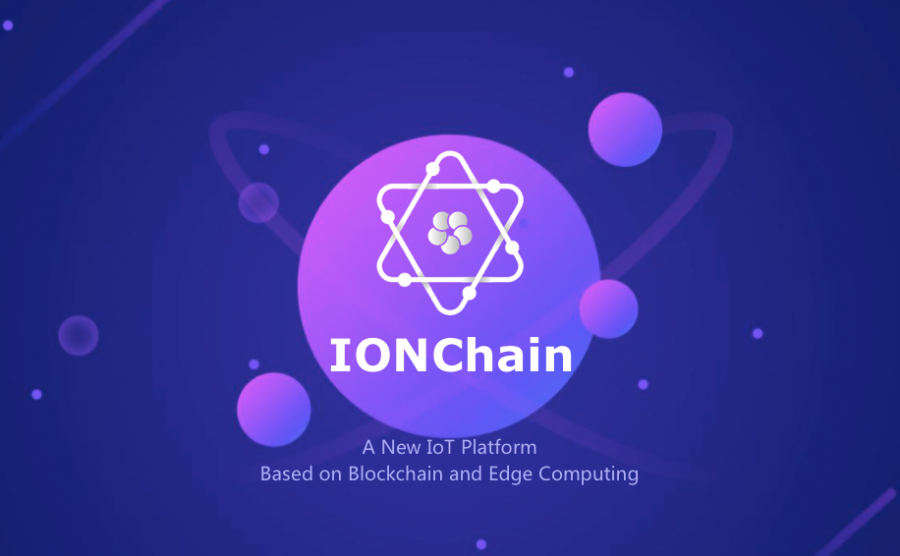 In a series of projects where many blockchains and the IoT are integrated, there is an eye-catching Chinese force--the IONChain. IONChain is a new IoT foundation platform based on blockchain and edge computing. It aims to build underlying public blockchain of IoT ecosystem and advocates "one device, one coin, one code". The name of the IONChain itself has a special implication: each IoT device on the IONChain is like a single ion. They can be freely combined into different application scenarios. The IONChain serves as the connection layer and can access all kinds of IoT devices and support decentralized peer-to-peer application interactions between devices.

IONChain has developed a revolutionary technology: Edge Computing. Edge Computing refers to the use of network, computing, storage, and application core capabilities as an open platform close to the objects or data source, providing nearest-end services nearby. It can meet the key needs of industry digitalization in agile connectivity, real-time business, data optimization, application intelligence, security, and privacy protection.

Relying on the edge computing, the IONChain truly has the ability to achieve "a mining tool for all things"—anything that has access to the IONChain IoT device can obtain mining incentives through the "ionization algorithm". And the system will carry out accurate reward calculations from several dimensions such as functions, data volume, time (eg, terminal controlled duration, data collection duration, etc.) and space (area covered by the terminal or terminal cluster) of the IoT device. Using ion coins as incentives, both SMEs and individual users will have great willingness to join the new ecosystem where everything is a mining tool.

The reason why IONChain can develop and apply such cutting-edge technology is because of its strong developer team. In the past three years, the IONChain technology team has provided solutions and products for more than 10 industries and nearly 20 blockchain projects, and accumulated a large amount of link systematic experience based on architecture design, product development, project management, and commercial applications. It is worth mentioning that the IONChain team have enlisted two core members from Hyperledger Core Developer. The "Blockchain Brothers" forum built by them has thousands of people and 3000+ daily page views.

Such a team with a wide range of technologies and operations and a large project structure has attracted the attention of many high-quality investors since the start of the project. According to official sources, well-known blockchain investment agency LD Capital has already invested in IONChain. And LD Capital will establish the IoT Blockchain Industry Fund, which will be managed by Kong Huawei, the head of the Shanghai branch of the Institute of Computing Technology of the Chinese Academy of Sciences.

In the interview, LD Capital founder Yi Lihua said that he will continue to focus on the cross direction of the blockchain and the IoT and deeply support quality projects such as the IONChain.

The IONChain project will be listed on the Exchange recently, and its public blockchain will be issued on August this year. It is reported that the development work and community building of the project are implemented smoothly according to schedule.