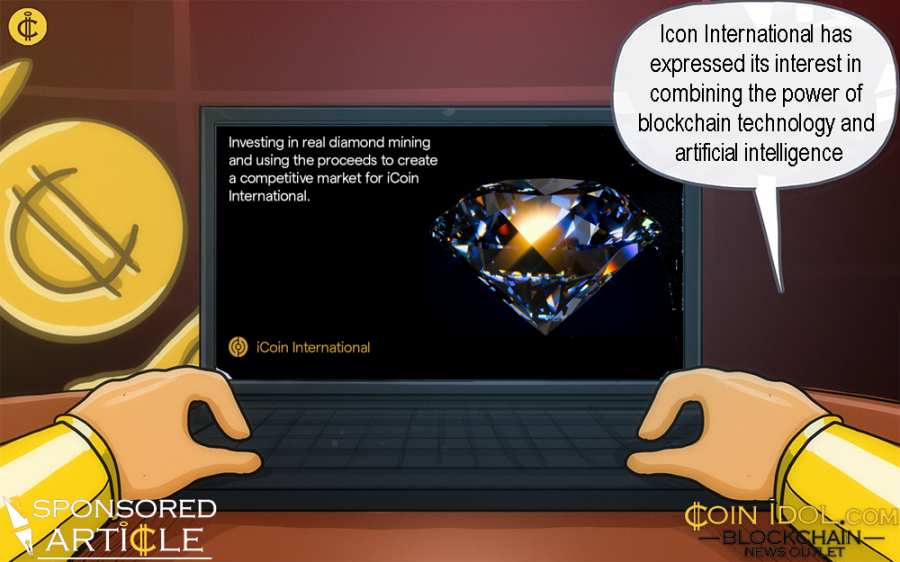 A whole new economy is in the works for the diamond mining industry as blockchain-based international platform iCoin has recently announced a new initiative to fuse decentralized technology with artificial intelligence to benefit the growth of the sector.

iCoin International is owned by the Millenium Mining Corporation located in Freetown, Sierra Leone, a country famous for its precious gem operations. The corporation has expressed its interest in combining the power of blockchain technology and artificial intelligence to deliver speed, efficiency, and transparency to diamond mining. The ambitious project will use these emerging technologies to create a holistic business environment which will consequently create a cleaner, more transparent environment for its employees and users.

On 6th August, 2019, iCoin announced its collaboration with LATOKEN for an initial exchange offering (IEO) for early backers who are in search of an opportunity to support the development and growth of the newly competitive market.

The collaboration of emerging technologies within a valued industry that creates the most-sought after precious gems in the world is seen to have a great impact and several benefits for both the industrial and social sectors. Diamonds are most commonly used for aesthetic products such as jewelry -- they are truly invaluable and one of the hardest naturally-occurring materials. Understandably, the industry seeks continuous ways to improve material efficiency, which is at risk from the notorious lack of proper monitoring infrastructure, jeopardizing the efficiency and transparency of mining and distribution operations.

Mitigating the state policies that have unwittingly nurtured illegal distribution, iCoin aims to tokenize the diamond mining industry by introducing a well-organized real-time monitoring and auditing system. The platform plans to build a trustless network where there is no risk of corruption or duplication of data and to further enforce its trustworthiness. Each diamond extraction will be time-stamped on the blockchain to provide traceability on the ledger throughout the supply chain. A system will also be provided that will enable automatic and instant transactions through a smart contract and an open distributed ledger to ensure transparency for all finances.

The Millennium Mining Corporation exported over USD 150 million worth of diamonds in 2018. The largest diamond found by the corporation was in 2005 -- a clear 8.25-carat piece. Several tests have been conducted in Baimbawai Pool in the Sewa River, a deep section of the river with slow-moving water. Geological surveys estimated that the pool has around 1 to 1.5 million cubic meters of diamond-bearing gravel ranging from 0.2 to 0.5 carat per cubic meter, translating to around 200,000 to 750,000 carats of diamonds in the pool overall.

iCoin’s economic model centers around the re-injection of profits derived from diamond mining back into the platform to facilitate growth, with a predicted valuation of a 5,000% return on value growth over the course of five years after the launch. The blockchain mining operations will be monetized through the ERC20 native token of the iCoin platform. The opportunity for traders and investors of interest to join early is active right now through an IEO event on the LATOKEN exchange. Current users of LATOKEN will not have to go through AML (Anti-Money Laundering) or KYC (Know Your Customer) verifications.

Backers can get tokens at LAToken.com exchange using BTC, ETH or USD. The tokens will be released once the event is over, allowing the chance to trade, use a medium of exchange or hold for profit.

iCoin’s utility token will serve as a currency to purchase diamond merchandises on its official website. In the secondary market, the token will be available to trade with additional ERC20 tokens. Millennium Mining Corporation has also confirmed it will offer a buy-back program for iCoin tokens at the market price rate one year after the IEO launch.

Combining the industry of the most sought after and precious gems in the world with an ever-growing technological market is a fresh and exciting initiative that will undoubtedly have a bright and successful future.

To learn more about iCoin and the ICOIN IEO on LATOKEN, visit the website.

Tags
Mining Decentralization Technology AI Industry Platform Economy Market
Most Popular
Mar 08, 2021 at 14:34
News
Not Only Bitcoin: the NBA Stars Adopt Dogecoin Following the Flagship Cryptocurrency
Mar 08, 2021 at 13:37
News
Bitcoin Struggles To Break the Overhead Resistance at $52,000 as Buyers Continue Their Unending Price Tussle
Mar 08, 2021 at 10:20
News
Polkadot Sustains Recent Rallies, May Attempt Breakout at Recent High
Mar 07, 2021 at 11:30
News
Blockchain and Cryptocurrency Industry is Becoming Emancipated as the Number of Women in It Is Growing
Mar 07, 2021 at 09:18
News
Chainlink Declines as It Continues to Face Rejection from Previous Highs
More