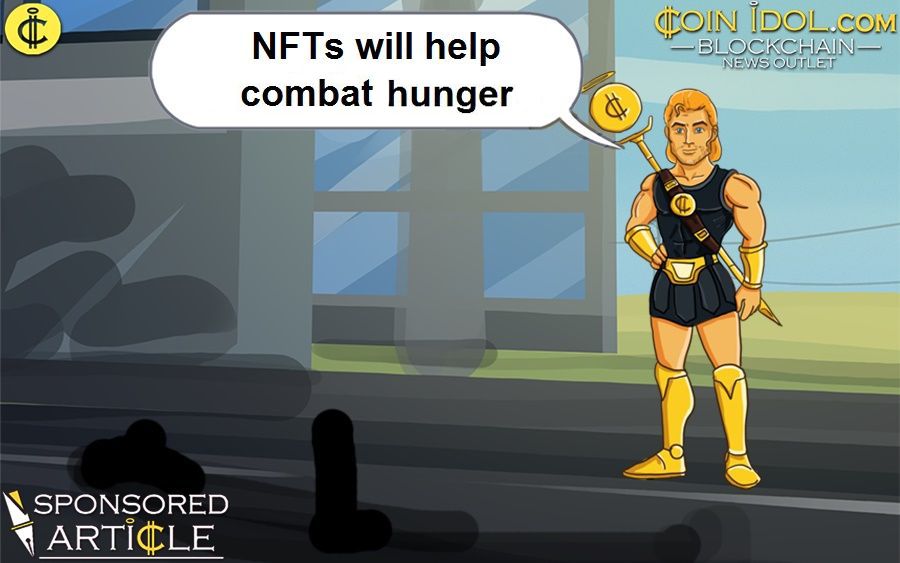 SINGAPORE – April 28, 2021 – The Dole Sunshine Company today announced that is has joined forces with acclaimed artist David Datuna to create an NFT (non-fungible token) collection inspired by their Sunshine for All TM rallying cry. The aim is to increase awareness of food insecurity and malnutrition worldwide, while raising funds toward alleviating hunger today. The works will be available for purchase via NFT auction platform Rarible.com on May 6 at 3:30pm PST.

Inspired by Datuna’s viral banana-eating moment at Art Basel Miami Beach in 2019, which earned him the moniker of “The Hungry Artist,” Dole has partnered with Datuna to create an NFT series to further the brand’s goal of making nutritious foods accessible for 1 billion people. The need for good nutrition has never been greater with nearly one-quarter of the world’s population experiencing moderate or severe food insecurity and globally one-third of food produced for human consumption lost or wasted.

“My NFT collection for Dole, along with the physical artwork, tells this story through symbolic animations, sound and imagery.”

The partnership is part of the overall global Dole Promise, which aims to increase access to good nutrition, decrease food waste, plastics in packaging and greenhouse gas emissions. The brand has already been hard at work around the world, and in 2020 launched a partnership in the City of Jackson, Mississippi, with multiple public and private institutions, including the local Boys & Girls Club. Dole’s Sunshine for All TM Cities initiative brings nutritious food and education into underserved food deserts. Proceeds from the NFT sales will be donated to Boys & Girls Clubs to fund nutrition and hunger-focused programming, including Dole’s Sunshine for All Cities™ program. With this initiative, the Dole Sunshine Company is hoping to raise the funds needed to expand this program and other nutrition-focused initiatives nationally, deepening the partnership with Boys & Girls Clubs and bringing education, pop-up farmers markets and nutritious food to cities across the country, including our ongoing efforts in Jackson, and expanding to Baltimore and beyond later this year.

“Our promise to provide access to good nutrition to 1 billion people by 2025 is one we cannot accomplish alone. This is why we seek out partners like David Datuna and the BGC that are closely aligned with our values,”

''To create systemic change, we need to converge purpose with creativity, innovation and technology. This effort is the best representation of how we want to make a difference in this world. As a brand that can literally eat its purpose, David’s perspective on using art and digital technology as a platform for awareness and societal change, is one that clearly resonates and inspires us.

Taking a bite out of hunger

Datuna will create a five-part series focused on the intrinsic connection between nutrition and food security. The NFTs will represent people coming together to take a bite out of hunger. The fifth and final piece, Sunshine for All, is a pop-art inspired montage of the first four pieces highlighting the importance of closing the gaps to good nutrition for all. This work will also live as a physical piece featuring Datuna’s signature lens technique, a layered composition signifying society’s individual viewpoints.

The entire art series will go on sale on May 6. The fifth montage piece will be at auction through May 8th, and will be on display in a virtual gallery (Decentraland) as well as a physical location in New York City to be announced shortly.

Net proceeds from the NFT sales will be donated to Boys & Girls Clubs to fund nutrition and hunger-focused programming, including the Sunshine for All TM Cities program. In addition, Dole is working to limit the environmental impact of the NFT sale by partnering with decarbonization advisor, Aerial, to create a climate positive solution. This will not impact the amount of funds raised by the auction and will ensure any future sales are also appropriately offset.

Additional auction details will be available via Rarible starting on April 28, 2021.

For more information and to follow the auctions, please visit SunshineForAll.com.

About the Dole Sunshine Company

David Datuna is a Georgian-born American Artist most widely known for his Viewpoint of Millions series, featuring portraits of Jay-Z, Steve Jobs, Marilyn Monroe and others; and his groundbreaking Viewpoint of Billions series using wearable technology featured at the Smithsonian National Portrait Gallery. David’s work is represented at prestigious art fairs and galleries globally such as Art Miami and The Armory Show. Datuna was born in 1974 in Tbilisi, Georgia, and began his journey as an artist after he moved to New York City. As a self-taught artist, Datuna’s work takes a new direction in abstraction. Using a limited color palette, simple shapes, and eyeglass lenses Datuna succeeds in creating dynamic and expressive works expressing unity, equality and freedom.

Rarible is a marketplace for NFTs. It gives a platform to the artists and collectors to create, collect, and trade digital collectibles. Rarible was launched in the beginning of 2020 by Alexei Falin and Alex Salnikov. The goal of Rarible is to evolve into a fully Decentralized Autonomous Organization (DAO), where the decision-making and organization is in control of active platform users. By giving creators and collectors the opportunity to come up with platform ideas and vote on platform upgrades, they aim to make it a public platform, responsive to the users.