Democracy as a Weapon Against the Anti-Blockchain Rhetoric 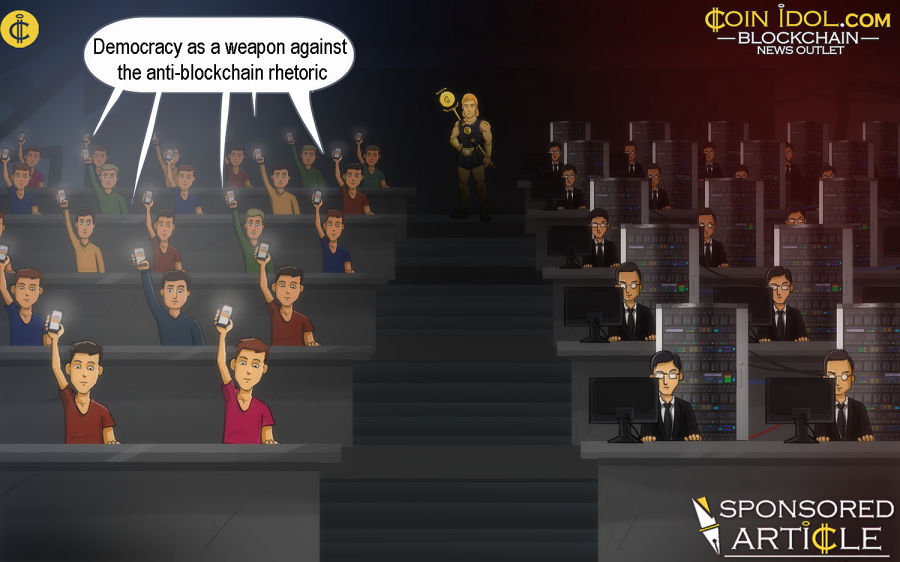 Following an unprecedented uproar caused by the blockchain systems, countless trends are leading to a broad-spectrum shutdown of this technology. Without fast democratization within the market, your future may be at risk of blockchain-absent asset management.

The benefits of decentralized systems include enhanced privacy, lower transaction fees, and higher efficiency. From a government-based perspective, however, they also represent a public attack on their role as the financial facilitator. Based on that rationale, lawmakers from around the world are increasingly pushing for the elimination of blockchain.

Transactions to Blocks, Blocks to the Chain, and Safety to Users

The principle that permits the blockchain technology to thrive is based on a user-oriented system. Individuals initiate transactions, input their private keys, and allow the miners to verify. After solving a series of mathematical puzzles, the miners complete the final step before entering the transaction into a block. Once the block is full and holds no more available space, it is added to the chain. Although it may appear somewhat incomprehensible, the entire endeavor is quite seamless and brilliant. So, how exactly does this affect your asset management?

Well, blockchain technology originated alongside one of the most ground-breaking assets - cryptocurrency. Given its power to decentralize the market, it offered a glimpse at the world where user-to-user trading exists. Meaning, no middlemen and transaction facilitators are required. Thus, what if one could apply this concept to all of their assets and create a utopian marketplace?

The World May Never Know

Time is a commodity often missing from the equation that allows something to achieve its full potential. With the ever-growing blockchain technology, this presents itself in form of numerous attacks and bans imposed by large economies. Consider, for instance, how China perpetually prevents these systems from living up to their expectations. In fact, just earlier this year, it completely scrapped a blockchain funding center. Given that it is the second largest economy on the planet, any minor infraction that China imposes can be devastating. Thus, a complete scrap indicates that the country is doubling down on their anti-blockchain rhetoric.

Fortunately, governments do not hold absolute power over the society in most countries. It is the citizens that bear the burden of selecting people that will represent their interests on the political scene. This is where the democratization comes into play. In order to avoid a market were the blockchain technology has been eliminated, everyone carries a portion of the responsibility. Meaning, eligible citizens must take a firm stance on the issue. They also need to reinforce their views through voting that puts progressive minds in charge.

For example, if enough proponents of blockchain technology unite, the democratic process will require their voices to be heard. This comes directly from the timeless rule that grants victory to the side that has more votes. Think about the way that the presidential elections are organized in the United States.

A few decades from now, history books will depict the battle for the survival of blockchain. It is up to the people to decide whether those books will be written on paper or decentralized writing software. If it is the ladder, blockchain system will still exist and offer an unparalleled efficiency with asset management. Not only will it improve security, it will also reduce the cost of trading, transacting, and harvesting investments. Moreover, it will generate an entirely new segment in the market dedicated to the miners. Thus, blockchain's survival would be the first step towards a historical development that sets the scene for the upcoming centuries!