Cryptocurrencies Made Upward Corrections after Decline but May Face Further Selling 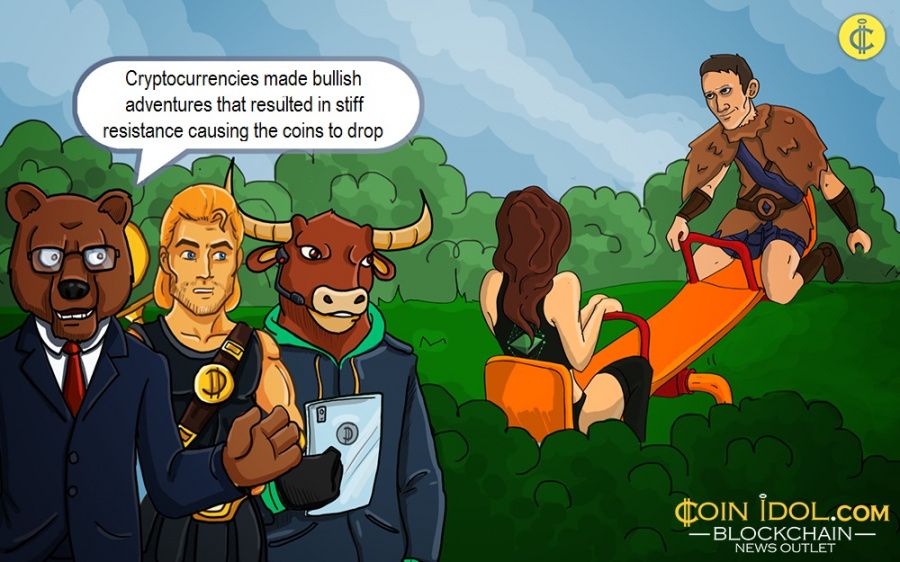 Recently, Monero, DASH, and NEO were making impressive moves. These cryptocurrencies made bullish adventures that resulted in stiff resistance causing the coins to drop. The coins dropped and made a pullback which was rejected as the coins face another selling. The Dogecoin and Maker have been relatively stable in price as the coins continue its sideways move.

Monero (XMR) had been on a steady decline since June. The coin has dropped from $120 to $54 as a result of consistent selling pressure. Today, the XMR/USD pair may further decline because the previous low has been broken. In the last three months, the price has been stable above $50. However, the support at $50 was breached after the market moved up and faced another selling at $65. The coin dropped to $47 and pulled back. In other words, the price breaks below the resistance line and pulls back. Monero is facing resistance at the 26-day EMA indicating a further depreciation. Besides, the RSI period 14 levels 45 is below the centerline 50 which also confirms further selling. 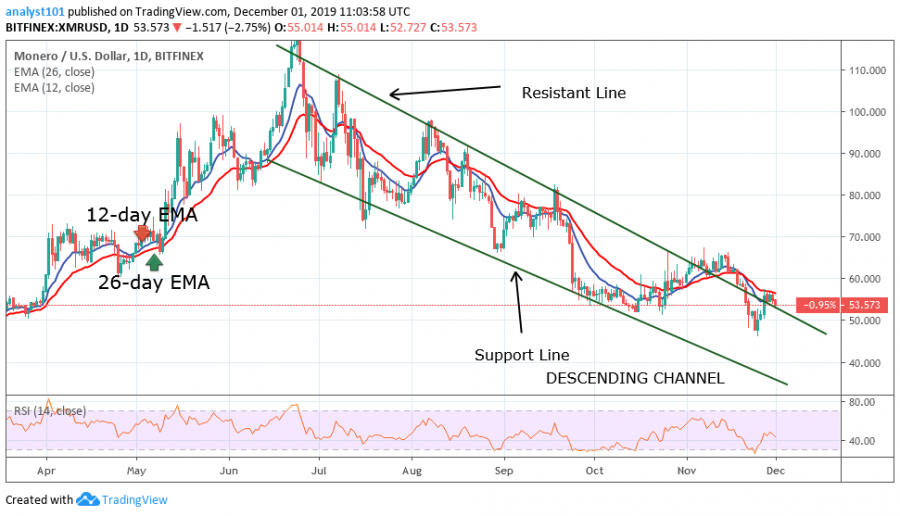 Recently, the two months old range bound movement was terminated as the coin dropped to a low of $50. The price pulled back and it is being resisted by the $12-day EMA or below the price at $60. Today, the market is falling and if the bears break the current low at $50, the selling pressure will resume and reach a low of $40. Conversely, if the buyers come in at the oversold region the bullish move will be sustained and the price will break above the EMAs. All the same, the DASH is in a bullish momentum as the price approaches the 20% range of the daily stochastic. 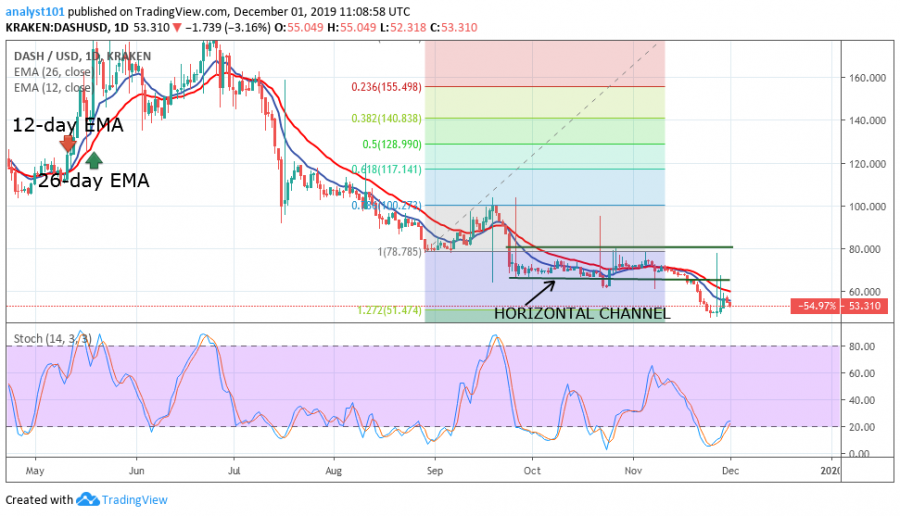 The pair is now trading below the resistance at $10. This was the previous support level in July. In November, the coin moved up to $13 but was repelled. NEO lacks buyers at the upper price level, as the coin nosedives below the previous low. The pair fell below the 12-day EMA and the 26-day EMA. This indicates that NEO may suffer further selling. If the coin falls and breaks below the support at $7, it means the downtrend has resumed. However, if the current level holds, the coin may resume a sideways move. 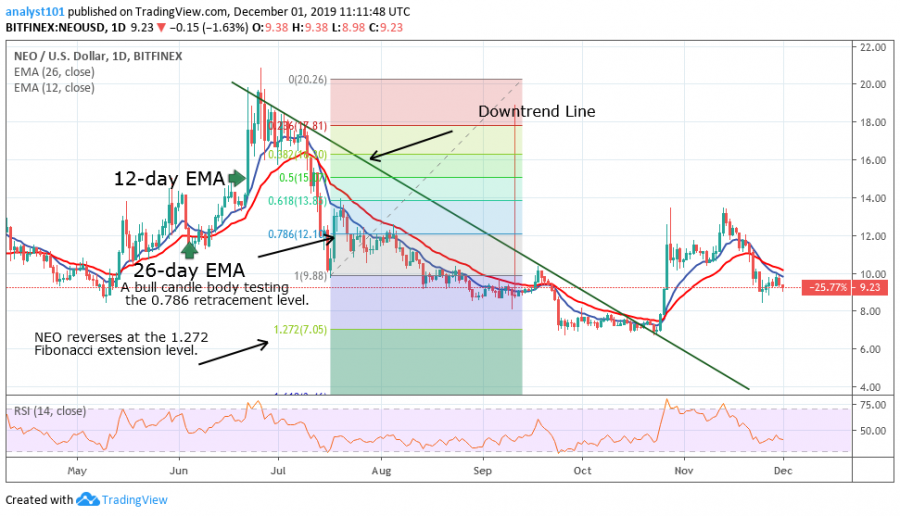 Dogecoin had been range-bound since April. The market price has been fluctuating between the levels of $0.0022 and $0.0035. Presently, the price is trading above the support line. The coin is expected to rise to revisit the resistance line as it is above the 40% range of the daily stochastic. That means that Dogecoin is in a bullish momentum. 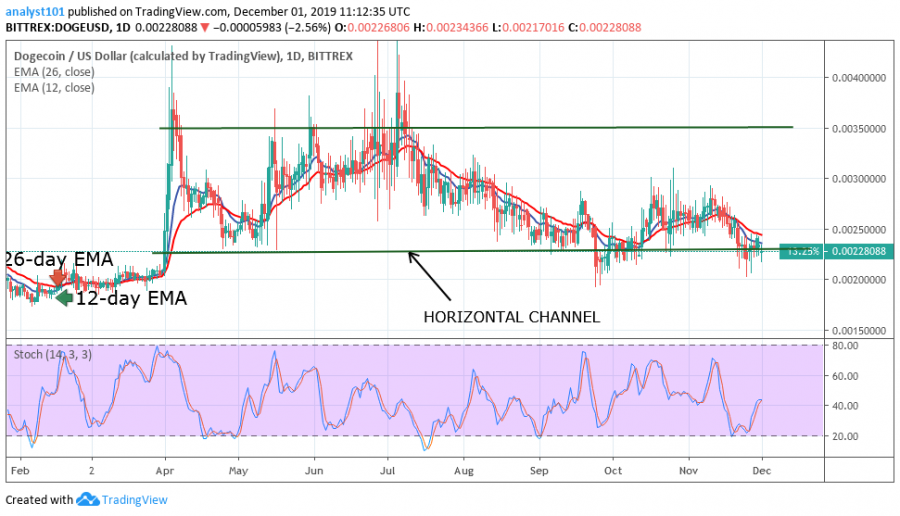 Maker had been trading in a sideways trend since April. The coin has been fluctuating consistently between the levels of $400 and $700. The coin is good for position traders who trade coins that maintain stability in price. The reverse is the case for short term traders who hardly profit in such coins that don’t trend. The RSI period 14 level 43 indicates that the market is in the range-bound zone. 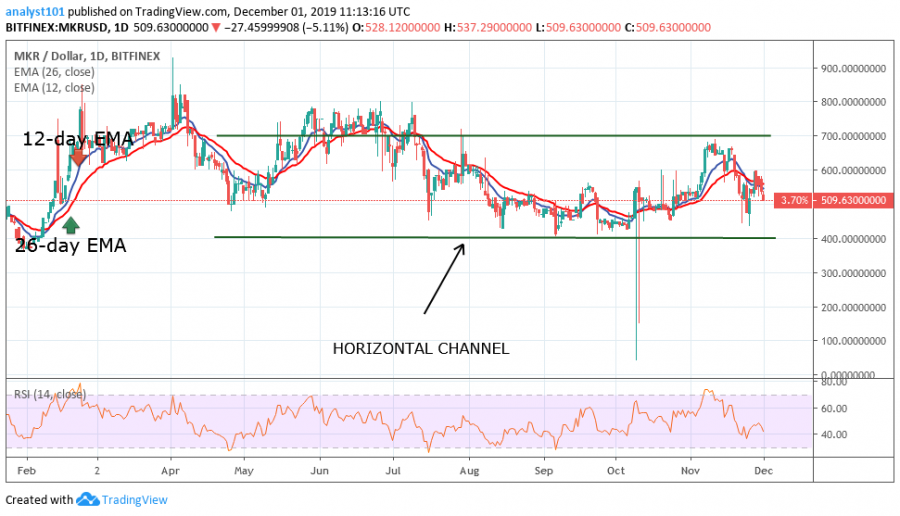 Disclaimer. This analysis and forecast are the personal opinions of the author are not a recommendation to buy or sell cryptocurrency and should not be viewed as an endorsement by CoinIdol. Readers should do their own research before investing funds