BM Radar is Launching the Wallet for BMT Tokens 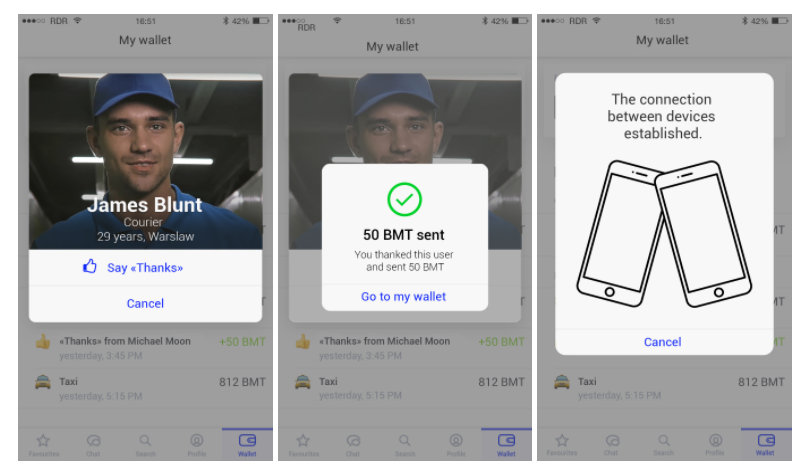 The Business Molodost company announced the release of the beta version of the vault for the BMCHAIN project. The functionality of the solution will be built on the basis of the mobile application BM Radar, an online messenger that is used by more than 25,000 entrepreneurs around the world.

The developers have already presented the preliminary interface of the first version of the "Wallet" section, which will be available for iOS and Android operating systems.

The functionality of the wallet allows you not only to start working with tokens, but also to perform a full cycle of operations, including deposits and transfer between users and their accounts.

Now BM Radar messenger is used by tens of thousands of people around the world. For another 33,000 people who receive BMT on the BM platform the application will be available by the end of November.

The solution itself combines the advantages of a messenger and online banking, the elements of which are planned to be implemented in the future as a system of settlements between companies and buyers. In addition, the user will also be able to view the history of transactions and exchange messages, as well as a database of information and support services.

In the future, the application will include a showcase of special offers in the form of cards with the goods and services which can be bought for BMT tokens.

According to preliminary forecasts of the developers launching their own wallet may optimize the process of popularization of the token among users of the future platform and increase the circulation of the currency itself, since there is currently no single centralized solution that would cover the needs of the tokenholders.

Experimental testing of the mechanics of the first version of the BMCHAIN ​​platform, which will be released at the end of this year, is now being developed on the BM platform, where users receive tokens for writing posts and voting. The tokens are charged to both content authors and those who vote for the most interesting materials. In total, more than 33,000 active users are involved in the experiment.

The release of the test version of the BMCHAIN ​​platform was decided to be postponed to an earlier time than originally planned, due to the optimization of the development process and the demand of the target audience, as well as the need to popularize the token after entering the exchange.

Implementation of such a large-scale scope of work in a short time and updating to the level of mass consumption became possible due to involvement of the Business Molodost community of many thousands of users with real demand for the creation of a powerful self-developing infrastructure. The purpose of the experiment on the BM site was to find out the viability of the project as a whole, proving the possibility and value of using blockchain by tens of thousands of advanced Internet users. A sufficiently high involvement in the project of people previously unfamiliar with the phenomenon of cryptocurrency, showed that the launch of the platform can be implemented to a wider audience of users, and then to the global market.

Initially, the platform for social interaction BMCHAIN ​​will be built on the basis of the Steem core and later transferred to its own blockchain for the introduction of enhanced functionality of the reputation system.

In the first version of BMCHAIN ​​will be involved two units - a reputation score and BMT token. The user's reputation will be built on the votes of other participants who vote for the content and is a multiplier of charging tokens and monetizing the utility. In the future, when forming the rating, it is also planned to take into account the activity scale in order to stimulate a constant flow of users and increase the project's capitalization.

The following versions will be based on a more advanced reputation system, which will create an effective model of interaction between customers and performers. Users will be able to quickly and virtually free to find proven contractors, and consumers - to apply for services to a particular company.

Thanks to the advantages that the environment provides, it will be possible not only to monetize the time shown in the Internet space, but also to make the qualitative construction of business and human relations profitable primarily from the economic point of view.

Users will be able to sell the received tokens on the exchange or use them for purchasing goods or services of BMCHAIN partners, and store and transfer to other users with the help of a new wallet.

It is expected that the BMCHAIN ​​network will involve thousands of partners - restaurants, cafes, shops and companies that provide various services. These companies will accept BMT tokens for full or partial payment for their goods and services. Agree, it's great to write a couple of good posts about the development of your business, get a few hundred tokens for them and have lunch or take a taxi for free?

Another option on the basis of BM Radar will be an option that allows you to thank other users via connection of phones.

"Our goal is to provide the first sales to the partner network of coffee houses and restaurants using our application completely in the legal field together with the BMCHAIN project. Thus, creating an example of a new loyalty system and an ecosystem of tokens with their use on an everyday basis. Anticipating possible remarks that there are places that accept Bitcoin already, I note that in our case such implementation will have a positive economy for the payer, " says Alexander Sagoun, the executive director of Business Molodost, a partner company of the BMCHAIN project.

Now the BMCHAIN team is actively preparing to launch the first version of the project, in the public testing of which thousands of people can take part. The source code for the platform will be posted on GitHub in a few weeks.

Tags
Blockchain Cryptocurrency PR Press release
Most Popular
Aug 24, 2019 at 12:20
News
TradeSanta : Enhancement the Automatic Trading in Cryptocurrencies
Sep 03, 2019 at 13:36
News
Paycent Gears Up For the Biggest Trading Contest in the History of Crypto: Live September 3-rd on Binance DEX
Nov 21, 2019 at 09:10
News
Metaverse DNA To Leverage The Community For Its Blockchain Network Governance
Apr 16, 2019 at 12:05
News
A New Era of Public Chain: Ultrain Launches its Mainnet
Jan 13, 2019 at 12:53
News
ICOBox Founder to Make His Company the Leader of the Emerging Security Token Market
×