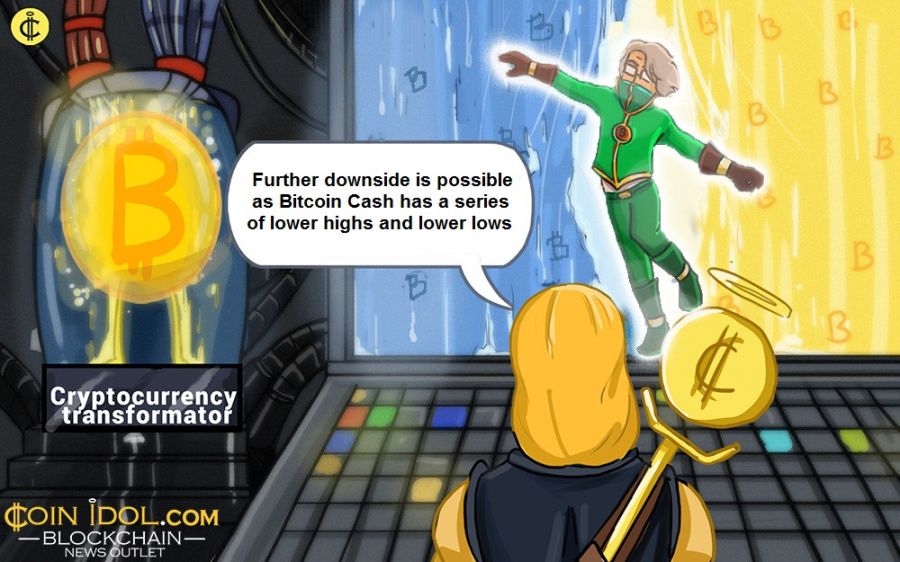 Bitcoin Cash (BCH) has continued its slide after falling into the zone of downtrend. Today, BCH is trading at a low of $490 at press time.

Further downside is possible as price has a series of lower highs and lower lows. After the downward impulse on September 21, the price of BCH reached a lower high at $550, but sellers pushed the price to a lower low of $479.

This was followed by a price decline to another lower high at $520. Today, BCH has fallen to a lower low of $471, but the market has resumed an upward move. Buyers are pushing the altcoin up to reach another lower high. Selling pressure will resume after a lower high is reached. This is how the price has been moving. If this pattern is broken, the altcoin will move back within a trading range, or the trend may change.

The altcoin has a bearish crossover. That is, the 21-day line SMA crosses below the 50-day line SMA, which is a sell signal. BCH is at the 35 level of the Relative Strength Index for period 14, which means BCH is below the 50 centre line. The cryptocurrency is also approaching the oversold zone. The daily stochastic indicates that BCH /USD has fallen into the oversold area. This means that the downtrend is gradually coming to an end. Buyers are expected to emerge.

The cryptocurrency is still in a downtrend but has fallen into oversold territory. This suggests that the market has reached bearish exhaustion. Meanwhile, the September 24 downtrend has tested the 78.6% Fibonacci retracement level. The retracement suggests that BCH is likely to fall but will reverse at the Fibonacci extension of 1.272 or at $432.29.