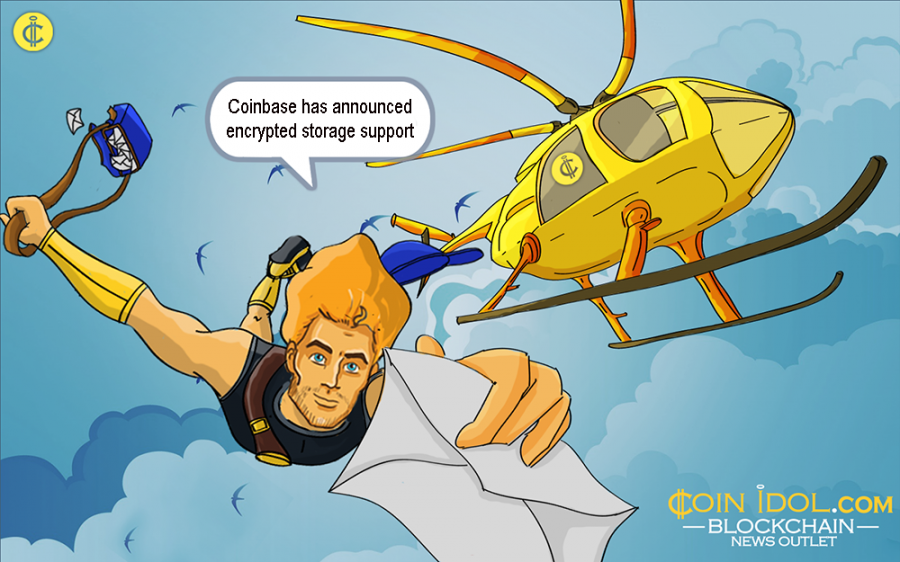 The famous cryptocurrency exchange Coinbase, based in the US, has officially announced encrypted storage support for their official Coinbase Wallet seed or private keys on iCloud and Google Drive. The announcement was made on Tue Feb 12.

According to a statement, the cryptocurrency exchange indicated that enabling its customers to upload their private keys to cloud strongly averts the loss of keys, which are very hard to find. 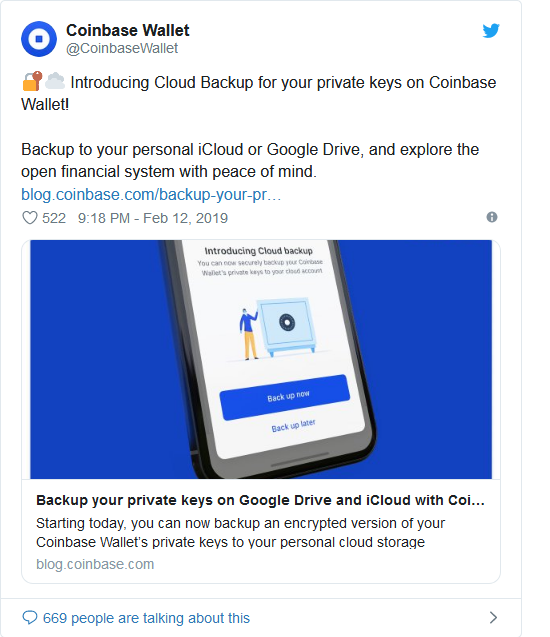 The feature is intended to ensure a customer never loses his/her private keys by making the process more securely reachable from iCloud.

“The private keys generated and stored on your mobile device are the only way to access your funds on the blockchain. Owners of ‘user-controlled wallets’ like Coinbase Wallet sometimes lose their devices or fail to backup their 12-word recovery phrase in a safe place, thus losing their funds forever,” Coinbase said.

The ability to keep a user’s private keys on both iCloud and Google Drive will help prevent losing access to user's account. For a long time, several users didn’t have any knowledge of backing up their private keys.

In general, private keys have a significant advantage to users in that they prevent other people, hackers or thieves from accessing a user’s cryptoassets. Now, users have a more reliable way of recovering their passwords through the Cloud.

As of now, cloud backup only allows and supports iCloud available on several iOS gadgets and Google Drive available on all devices with the Android operating system (OS). This choice is not compulsory and customers require to “opt-in” first and then activate later. How to activate a cloud backup.

1. Update your Coinbase Wallet App to the latest version.
2. Enrol in cloud backup from the settings menu by just pressing on ‘Recovery Phrase’.
3. You will see a pop-up offering iCloud or Google Drive backup. Then click on ‘Back up now’
4. Create a password.
5. Confirm the password you’ve created, and then enjoy the service.

In order for a user to restore his/her Coinbase Wallet, he/she will need to first download the Coinbase Wallet App, and then install it on the device he/she is using to restore the wallet. Simply tap on the phrase saying “I have a wallet” button, then insert the password used to backup the Coinbase wallet, and that’s all.

Provided the smartphone is logged into the same iCloud account (iOS) or Google Account on Android OS, the wallet will be successfully backed up. A user needs to fully activate the Two Factor Authentication specifically on his/her personal iCloud for more solid security. The process is simple.

When all the steps and precautions are followed and done while setting up this feature, then all users storing their Coinbase Wallet passwords on the cloud will be more expedient and safe. The wallet is really secure.